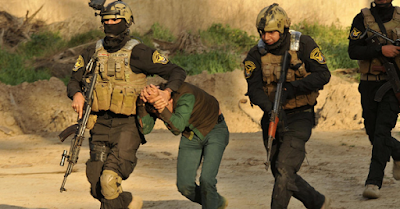 Violence in Iraq remained at a very low level during the start of May. The number of incidents remained in the teens, and there were few casualties as well.


There were 18 incidents reported in Iraq from May 1-7. That was similar to previous weeks when there were 18 attacks the last week of April, and 17 the week before that. Diyala with 5 incidents had the most out of the 6 provinces with attacks.

There were two incidents in Anbar, but one was not done by the insurgents. A family accused of affiliation with the Islamic State had their house bombed in Hit. Some IS members were also caught out in the open in Qaim and fired upon an Iraqi air force plane and were killed as a result. Anbar continues to have very few incidents each week, and appears to simply be a transit point for IS members coming from Syria for now.

For the second week in a row there were no incidents reported in Baghdad. Before that there were five straight weeks of attacks, but all were very small in the outer towns and villages of the province.

Diyala had 5 incidents. Four of those were IEDs, two of which struck government official’s houses, and a sniper fired at a checkpoint. 4 out of the 5 attacks occurred in the Baquba and Muqtadiya districts in the east and center of the governorate. Diyala is regularly the most violent area of the country each week. That’s because it is the core rebuilding area for IS. The militants have been attacking up and down the province shifting their operations from district to district. That shows that it has access to nearly every area of Diyala.

Kirkuk had 3 three shootings. One was an assault upon a checkpoint, and a mukhtar’s son was assassinated as well. Attacks have gone down in the province over the last four months.

A motorcycle bomb hit Mosul. Two suicide bombers were killed in Tal Abta in the west, 4 people were kidnapped and IS released a video showing it executing a Kurdish man it kidnapped in Ninewa. Like Anbar, there have been reports of IS fighters entering the province in the west from Syria along with people fleeing as a result. Attacks however have fluctuated up and down over the last few months.

There were four incidents in Salahaddin. A police patrol was ambushed in the Shirqat district, while five IS members wearing suicide vests were killed during a sweep in the middle of the governorate. Rockets were also discovered outside the base in Taji. It’s unclear if those were planted by IS however or pro-Iranian Hashd groups hoping to hit some U.S. troops who are stationed there. Attacks have been at a very low level in Salahaddin over the last two months.

Buratha News, "Rockets were foiled at the Taji military base," 5/1/19

Al Forat, "Two suicide bombers were killed and two cars were detonated in the security operation of the Island in Salahaddin," 5/6/19

Iraq Newspaper, "A Policeman Was Killed And 3 Injured In An Attack By A terrorist In Shirwan Area Of Kirkuk, Iraq," 5/6/19
- "Terrorist Calls For Execution Of Four Badush Residents In Mosul," 5/4/19

NINA, "Daesh Kills A Son Of Village's Mukhtar West Of Kirkuk," 5/2/19
- "Death and wounding of seven members of the federal police armed assault on the Kirkuk-Irbil road," 5/6/19

Al Sumaria, "Two suicide bombers were killed south of Tal Abta in Ninewa," 5/1/19
- "Unidentified gunmen blow up a home of a Daash family member in Hit," 5/6/19