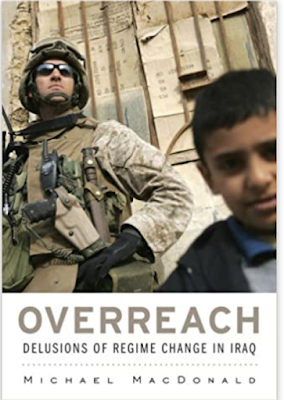 Overreach, Delusions of Regime Change In Iraq by Michael MacDonald might be the best explanation for why the United States invaded Iraq in 2003. It doesn’t focus upon the details of the Bush administration such as when the president said this or that but rather goes through the ideological and philosophical beliefs that led to America’s overthrow of Saddam Hussein. MacDonald argues that not only the White House but a large number of Republicans and Democrats in Congress and foreign policy experts agreed that overthrowing the regime would be easy. That was because the elite believed in American exceptionalism meaning that the U.S. was good for the world and that its values were universal and therefore Iraqis would want the same thing as Washington, a liberal democracy and a capitalist economy if only they were freed from Saddam. MacDonald not only goes through international relations theory but philosophy as well to explain these underlying assumptions behind the Iraq War.

WMD and the false claim that Iraq was aligned with Al Qaeda were the immediate arguments for the invasion but the bigger picture was that the United States was going to create a democracy in Iraq which would go onto influence the entire Middle East. This was not only expressed by President Bush but by neoconservatives, conservatives and liberal hawks as well who all backed the war. The idea was that as soon as Iraqis were unburdened with the totalitarian rule of Saddam they would move towards a democratic state and capitalism because this was what everyone in the world wanted. This was the reason why the White House thought that the war would be quick, easy and cheap. All that was needed was a short invasion and the Iraqis would take care of almost everything else upon their own accord. The Americans could pick some allies to install in power, elections would be held which pro-U.S. groups would win, and then a new liberal constitution would be created leading to a new and safe order in Iraq. There was no discussion in the U.S. about Iraqi identity, the role of religion, how sanctions had devastated the economy and middle class and there was no civil society. In fact, knowledge of Iraq and its history was considered completely unnecessary because Iraqis believed in the same values as America. As MacDonald writes this led to a miscalculation of costs and benefits and was the reason why Washington didn’t understand why things didn’t work out. Some of this discussion can get esoteric such as when the author goes through John Locke and Thomas Hobbes and there is plenty of international relations theory as well going over the two main schools the realists and idealists. In the end however MacDonald gives the best explanation for why the vast majority of Washington backed the invasion. They all believed that what America did was right and the Iraqis would naturally be thankful because they all believed in a liberal international order and society.

Another good aspect of Overreach is that MacDonald explains how the U.S. establishment dealt with its failure in Iraq. All kinds of arguments were made for why the war went wrong from the White House not listening to the right people to not having enough troops to Donald Rumsfeld being a bad Secretary of Defense to Coalition Provisional Authority head Paul Bremer making horrible decisions to ultimately blaming President Bush for not managing the conflict correctly. The question of whether regime change was justified in the first place was never brought up because that would mean that future military interventions by the U.S. could be challenged as well. Instead, all the discussions centered around whether the right choices were made on how the war was conducted. Similarly, when the Surge was started in 2007 and seemed like a success the elite jumped on this as proof of their argument that if America had just managed things better at the start Iraq would have all worked out fine. This was also based upon the universalism of American ideals that with a successful approach Iraq would have been a democracy and the U.S. would have won. This analysis gives a whole new light on these events. By connecting the specifics with the ideas behind them the reader really gets a new perspective on why people did things.

Michael MacDonald’s book is highly recommend for those that want to understand why the U.S. invaded Iraq. It can get lost in the weeds sometimes discussing theory and philosophy but it is worth the effort. No other book gets to the heart of the matter for why America believed in the Iraq War and how it responded when it went wrong. It provides an excellent analysis of U.S. ideals that led to the decision instead of getting caught up in all the details of who did what when.