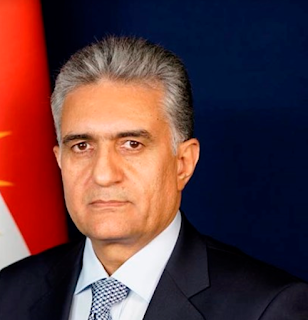 KDP's new candidate for the presidency Rebar Ahmed caught up in courts (KRG)
Iraq held elections in October 2021. Since than the new parliament has only re-elected Mohammed Halbusi as speaker and picked his deputies. The next step of selecting a president is being held up by another lawsuit.

The Kurdistan Democratic Party’s (KDP) candidate for president Hoshyar Zebari was rejected by the courts because he was previously removed as Finance Minister on corruption charges. The KDP then nominated Kurdistan Regional Government Interior Minister Rebar Ahmed. He is now stuck in the courts as well over whether he was named for the presidency during the designated time. Opponents of the tripartite alliance made up of Moqtada al-Sadr, the KDP and the Sovereignty Coalition of Speaker Halbusi’s Taqadum and Khamis al-Khanjar’s Azm Alliance, have been filing lawsuits over every step in the government formation process. First, the Coordination Framework made up of the major Shiite parties excluding Sadr filed suit claiming election fraud which was dismissed. Then it went to court saying that the election of Speaker Halbusi violated parliamentary rules, which it also lost. A third lawsuit claimed that the Framework was the largest bloc, but that failed as well. Then the Federal Supreme Court ruled on Zebari. The main point of this never ending series of legal cases is to delay the process and allow for more talks to try to convince Sadr to give up on his idea of a majority government which would exclude members of the Framework. So far it has failed, but it has dragged things out. This will continue into the foreseeable future as the Framework has few other ways to influence events.

Al Hurra, “A new name in the race for the presidency of Iraq .. The Democratic candidate may face a legal problem,” 2/15/22

Sotaliraq, “The Federal Court rejects the case of the Coordination Framework as the largest bloc,” 2/4/22