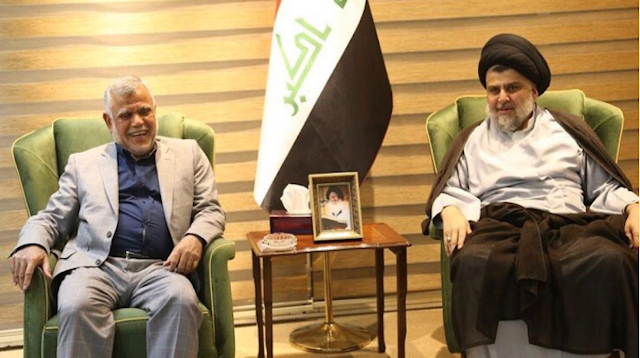 Now that the elections have been certified Hadi Amiri (left) and Moqtada al-Sadr (right) need to negotiate a new government (Kurdistan 24)
December 27 Iraq’s Supreme Court dismissed the Coordination Framework’s claims of election fraud and certified the results. The Framework, made up of Shiite parties besides Moqtada al-Sadr’s, asserted there was cheating in the balloting to create a crisis out of fear that it would be excluded by Moqtada al-Sadr if he got his wish of a majority government. The Framework includes some of Sadr’s longtime rivals such as Asaib Ahl Al-Haq. All the administrations since the 2003 invasion have been national unity ones where every winning party got a ministry or office to exploit for its own gains. Sadr threatens this status quo.

The political parties can now get down to serious negotiations to form a new government. President Barham Salah has 15 days to convene the first session of the new parliament and then a new regime has to be created within 90 days. The later deadline has consistently been broken in the past because talks over power sharing have been so difficult. This time is no different.

The leader with half the parliamentary seats plus one, which is 166 lawmakers, has the right to name the next government. So Far Sadr won 73 seats with his Sairoon list and has an alliance with Speaker Mohammed Halbusi’s Taqadum with 43 seats and the Kurdistan Democratic Party with 31. That gives him a total of 147 seats. He only needs 18 more to have a majority. His opponents in the Coordination Framework did poorly in the vote which was another reason why they created the current crisis. Former Prime Minister Nouri al-Maliki got 39 seats and Fatah made up of Hashd groups such as Badr and Asaib Ahl Al-Haq got 24. That’s only 63 seats between them. The National Alliance of State Forces which includes Ammar Hakim’s Hikma and former Prime Minister Haidar Abadi’s Nasr only gained 3 seats, is part of the Framework but Hakim said it will not join in the new administration. Financier Khamis al-Khanjar’s Azm list with 20 seats, has talked about joining the Framework which would give it a total of 83. The Patriotic Union of Kurdistan (PUK) with 18 seats is the only remaining major party yet unaligned. If it were to join Sadr he would have the necessary 165 MPs. If that didn’t happen there are a number of smaller lists that could still go towards Sadr.

This will take months to work out. The pattern after previous elections is for the Shiite parties to hold extended talks. When they come to a consensus over the next prime minister and government the other parties fall into line and then there are more meetings about who will get what as ministries and offices are how the ruling elite enrich themselves and maintain their patronage networks. The last elections were held in May 2018. Adel Abdul Mahdi wasn’t named Prime Minister until four months later in October. In 2014 voting took place in April and it took five months for Haidar Abadi to take office. 2010 was the worst when balloting was in March and Maliki didn’t win his second term until December, a record nine months. Due to the differences between the Framework and Sadr Iraq may be looking at a repeat of that last election.

Al Hurra, “Scenarios for forming an Iraqi government … a “comfortable” alliance for al-Sadr and the presence of Al-Fatah bloc,” 12/27/21

Sotaliraq, “Al-Hakim: We renew our congratulations to the winners, and we will not participate in the government,” 12/27/21