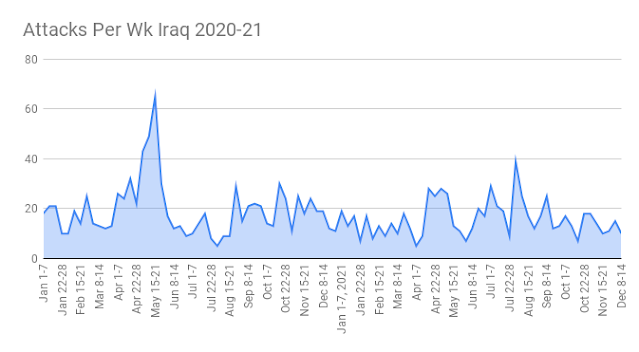 Security has remained the same in Iraq since mid-September. The Islamic State is in its annual slumber during the winter. Pro-Iran groups are increasing their operations against the Americans however.

There were a total of 14 security incidents reported in the press from December 8-14. That was down from 17 the week before. 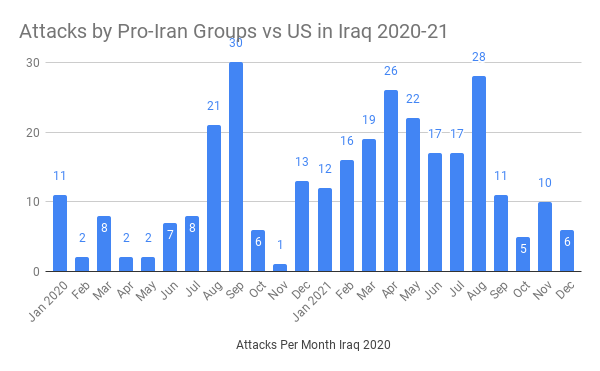 4 of those were by pro-Iran factions. They hit four logistics convoys working for the U.S. in Dhi Qar, Diwaniya, and twice in Babil. These groups started winding down their operations in September as elections neared. Incidents went from 28 in August to 11 in September and 5 in October, the lowest monthly total for the year. Since then they have started going up again with 10 in November and 6 so far in December. The groups are trying to show that they are still opposed to the U.S. presence in the country.

There were just 10 incidents by the Islamic State. Attacks by the group have been in the teens or tens since the third week of September. Operations by the insurgency have declined almost every winter since 2003.

They left 4 dead, 1 Hashd al-Shaabi and 3 civilians, and 6 wounded, 2 members of the Iraqi Security Forces (ISF) and 4 civilians. Ninewa and Salahaddin had 3 casualties each, followed by 2 in Kirkuk and one each in Babil and Diyala.

There was an IED in Babil’s Jurf al-Sakhr district in the northeast that left 1 Hashd dead. This is a target of opportunity for the insurgency as it is a large Kataib Hezbollah base surrounded by army units.

Kirkuk, Ninewa and Salahaddin had only five incidents total. Two old IEDs went off in Ninewa, while Kirkuk and Salahaddin had two shootings and a bomb. The latter were the typical low-level attacks IS carries out across the country.

Diyala had a kidnapping and two gun battles with the security forces. One of those was in response to a security sweep through the Hamrin Mountains. The abduction was likely done for money. Otherwise, the rest were the usual attacks largely aimed at keeping people out of IS areas.

NINA, "An attack by ISIS targeting Peshmerga units near Khanaqin in Diyala foiled," 12/10/21

- "A Convoy Of Logistical Support For The Int'l Coalition Forces Targeted With An IED In Babylon," 12/12/21

- "A Convoy Of Logistical Support For The Int'l Coalition Forces Targeted With An IED In Dhi Qar," 12/12/21

- "An Officer And A Security Element Injured In An IED's Explosion South of Kirkuk," 12/9/21

- "A Security source: A child was killed and his sister was injured in the explosion of an explosive device left behind by ISIS south of Mosul," 12/11/21

Press TV, "Resistance groups will stand up against anyone seeking to justify foreign forces' overstay in Iraq: Official," 12/12/21

Shafaq News, "3 civilians were killed and injured in an armed attack in Salahaddin," 12/14/21

- "A bombing targets a logistical support convoy of the International Coalition in Babil," 12/9/21