Since 2003 insurgent violence has almost always declined in Iraq during the winter. This year is no different as Islamic State attacks have gone down for three straight months. On the other hand, pro-Iran groups are increasing their operations against U.S. targets once again as December is the deadline for American combat troops to leave the country and these factions want to show that they are still opposed to their presence.

There were a total of 67 incidents reported in the media in November. That was down from 72 in October, 81 in September and 133 in August.

Those led to 27 deaths and 59 wounded. 6 members of the Iraqi Security Forces (ISF), 6 Peshmerga, 7 civilians, and 8 Hashd al-Shaabi were killed while 7 Peshmerga, 9 Hashd, 20 ISF and 23 civilians were injured. Diyala had the most casualties with 27. Three other provinces were in double digits with Kirkuk at 12, Sulaymaniya with 13 and Salahaddin with 17. 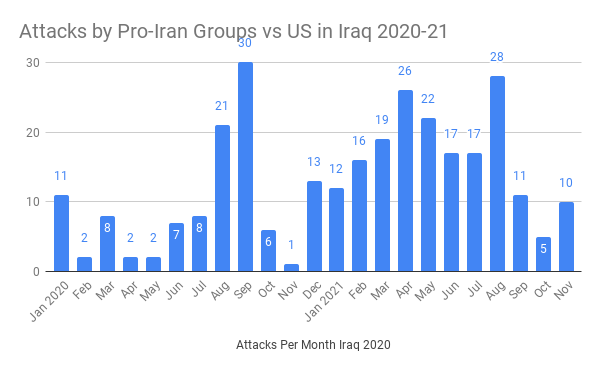 There were 12 incidents by pro-Iran groups. An IED and rockets were dismantled and destroyed in Babil and Ninewa respectively. Missiles were launched at two Turkish military bases in Ninewa, and seven convoys working with the U.S. were hit by IEDs in Babil, Basra, Dhi Qar, Diwaniya three times and Muthanna. The biggest incident however was when one of these factions launched a drone strike upon Prime Minister Kazemi’s home in Baghdad wounding him and five of his bodyguards. This happened after an Asaib Ahl Al-Haq brigade commander was killed as part of a mob trying to storm the Green Zone. 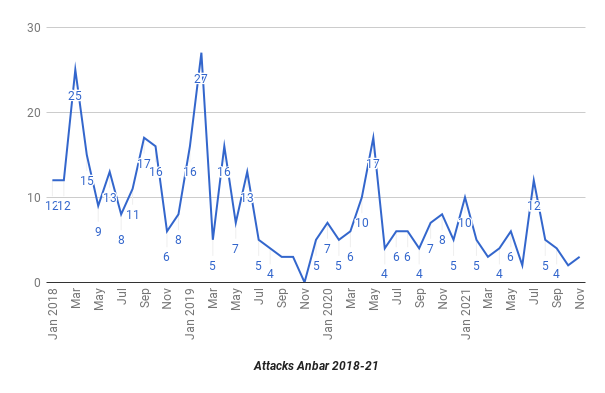 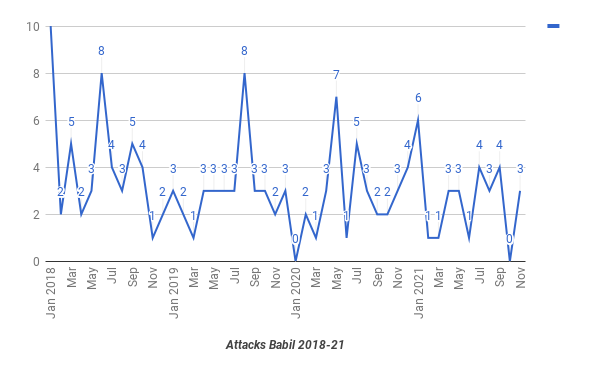 Anbar and Babil remained sideshows for the insurgency. Almost all the incidents were IEDs and shootings along with three people being kidnapped in the Rutba district of Anbar likely for ransom to raise money. Anbar is used to bring in men and supplies from Syria while Babil is simply a target of opportunity. 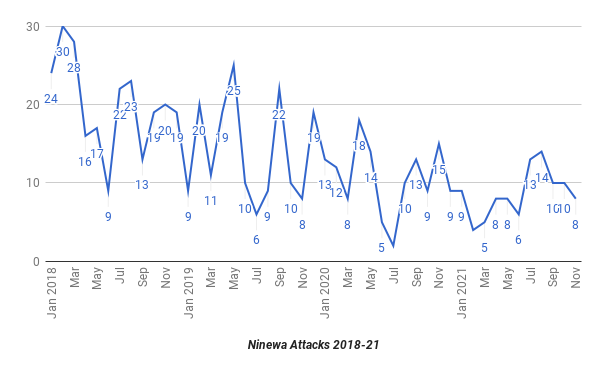 Ninewa is usually in that same boat but there was a change in November. Yes there were several IEDs but IS also carried out two attacks upon the Hashd in Hatra in the southern part of the province. The group is either trying to move into the area and assert de facto control or wants the Hashd to stay out. 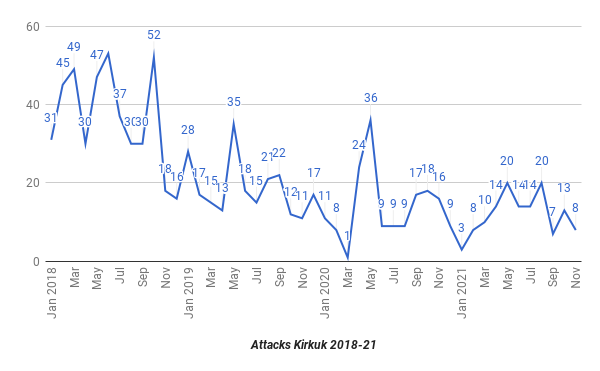 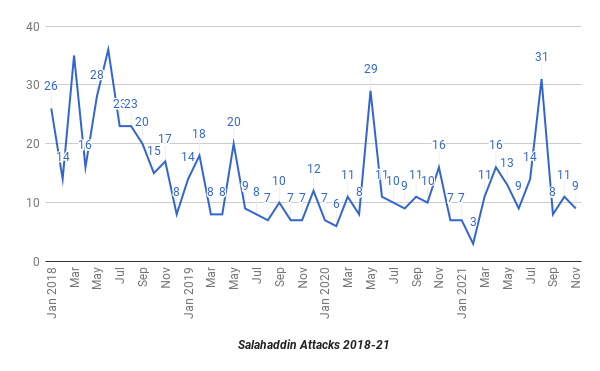 Attacks in Kirkuk and Salahaddin are constantly fluctuating. The two biggest incidents in the former were when an army base was hit with mortars and another confrontation that also involved mortar fire. In Salahaddin there was a large gun battle with the security forces that involved the Iraqi Air Force bombing the area. The Islamic State has major bases in both governorates but is more interested in rebuilding and protecting its leadership rather than using its resources to carry out attacks. 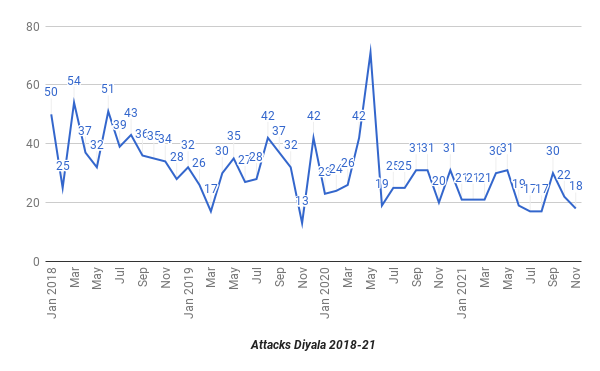 Diyala had the most attacks as usual. Previously IS was hitting the northwest area along the border with Salahaddin but that appears to be over. During November most attacks were in Muqdadiya and Khanaqin in the center and northeast which are where the group has de facto control. These incidents are meant to keep civilians and the security forces out of the areas where IS has bases and is trying to recover.

Despite the insurgency being at its lowest level since 2003 there are signs that IS is attempting to expand. In September the group was attacking southern Irbil. In November it was hitting Sulaymaniya. It carried out three attacks upon the peshmerga there. The goal appears to be testing security to see if the group can expand into new provinces.

- "A logistical convoy of the Iraqi forces was exposed to an explosive device explosion in Diwaniyah," 11/28/21

- "The Popular Mobilization Forces repel an ISIS attack in Nineveh," 11/17/21

Shafaq News, "A bombing targets the logistics support of the coalition in the far south of Iraq," 11/25/21

- "An explosion targeting the international coalition in southern Iraq," 11/19/21

- "An explosion targets an Iraqi convoy carrying equipment for the International Coalition in Al-Muthanna," 11/28/21

- "An explosion targets logistical support for the International Coalition in Babil," 11/30/21

- "With the intervention of warplanes .. Amerli clashes ended with 7 casualties and injures," 11/10/21

Sotaliraq, "Ninewa: The missile launchers were aimed at the camp of the Turkish forces, and we do not want useless proxy wars," 11/19/21