Review So Wrong For So Long, How The Press, The Pundits – And The President – Failed On Iraq

Mitchell, Greg, So Wrong For So Long, How The Press, The Pundits – And The President – Failed On Iraq, New York, London: Union Square Press, 2008 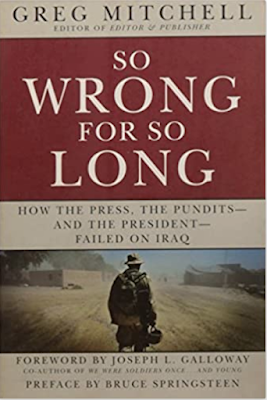 So Wrong For So Long is a very disappointing read. From the title I thought this was a critique of the media coverage of the Iraq War. It turned out to be a collection of editorials by the author Greg Mitchell from 2003-2007. The book was aimed at the failure of the American press to ask questions about the war but the anthology was very inconsistent. Some of the pieces were incisive but many were not. In the end, it’s not worth reading.

Mitchell was a constant critic of the U.S. Iraq war coverage. The media never asked whether Iraq was the greatest threat to America nor questioned the Bush administration’s claims about Iraqi weapons of mass destruction. Years into the war editorial boards came to criticize the conduct of the war, but only called for a better approach. As Washington Post journalist Karen DeYoung said, her paper became a “mouthpiece” for the White House. The issue is that these issues come up only a few times. Why Mitchell couldn’t have written a book about this critique is an open question. He was obviously passionate about it, but instead they just collected together his previous editorials, many of which are not on topic.

Most of the pieces are all over the place. One is a response to an editorial by another paper. Another is about Oprah Winfrey interviewing a reporter and asking him about his coverage of the war. There’s one on Thomas Friedman constantly saying that Iraq only needed six more months before things would change. Bruce Springsteen gets a column. The Pat Tillman story from Afghanistan is included and more. Many of these are not interesting and just represent a specific event in news coverage which don’t add to Mitchell’s argument. That’s most of the book and the reason why So Wrong For So Long is so bad.