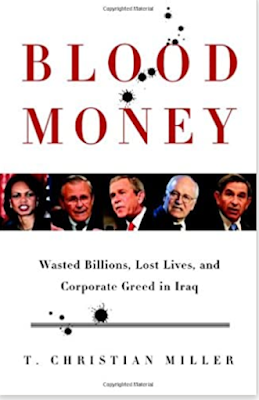 Blood Money, Wasted Billions, Lost Lives, and Corporate Greed in Iraq is about the failed reconstruction project by the United States after the 2003 invasion that deposed Saddam Hussein. Author T. Christian Miller goes through the planning, the different sectors of the country that the Americans tried to rebuild, the private contractors that flocked to profit from the war, and the effect this had on the people of Iraq. The author argues that the U.S. never had solid leadership, kept changing its plans and the result was a total failure.

At the heart of the problem was the Bush administration not adequately planning for postwar Iraq. This was due to a lack of leadership. Rather than picking one person or agency to deal with Iraq after Saddam the National Security Council, the State Department, the Pentagon, the Joint Chiefs of Staff, the U.S. military’s Central Command, and the ground forces command for the invasion each had their own separate groups which never coordinated with each other. The few plans that were created were never passed down to the invading American forces. Even those that were completed were inadequate. The author for instance interviewed Undersecretary of Defense for Policy Douglas Feith who ran the Office of Special Plans which was in charge of the Pentagon’s post-war strategy. He claimed that the Defense Department did prepare for life after Saddam, but then admitted that he only created a five page outline for what was to happen. Miller doesn’t touch upon it but the reason why the White House didn’t seriously consider what would happen the day after the war was that it believed that the Iraqis would quickly take over and the Americans would be out of the country in a few months. There was no need to make any elaborate strategy and there was definitely no desire to rebuild the country.

Most of Blood Money goes through the various parts of Iraq that the U.S. tried to rebuild, how the projects were mismanaged, the American companies that were hired, and the corruption and waste that led to. The power grid was a major emphasis. One major problem was that there were seven U.S. civilian advisers to the Electricity Ministry from April 2003 to August 2004 each with their own plan which led to no consistent strategy. Another issue was that the Americans decided to continue with a Saddam era policy to install natural gas powered turbines at power plants. The problem was there were no pipelines to deliver the gas and few were ever built. Instead, the Iraqis had to use heavy fuel to run the generators which wore them down. One generator installed at a power plant for $40 million only lasted one year and then had to be replaced because of the use of the wrong fuel. Finally, starting in 2005 the Americans began turning over the power plants that it rebuilt to the Electricity Ministry without properly training the Iraqis on how to operate them. Iraq also didn’t have the money to finance them which led to a series of shutdowns, facilities operating at far below capacity and more. By 2006 Iraqis had less electricity then under Saddam. The Americans blamed the Iraqis lack of work ethic for this instead of their faulty strategy. These problems were repeated in many other fields. There was no consistent leadership. Plans constantly changed. Millions were spent on projects that were either inadequate or never completed while the companies still profited from them. Then the projects were handed off to the Iraqis without adequate support. This says nothing of the lack of security which threatened the building and maintenance of these facilities.

An example of the profiteering that occurred can be seen with Custer Battles. The company was formed by two ex-army friends who got a $9.8 million contract in August 2003 to deliver new Iraqi currency and destroy the old one. It was supposed to build three main camps in Mosul, Basra and Baghdad, get trucks for the job and provide services. The company missed the deadlines to build the camps and the cabins it constructed were too small. It delivered substandard food and half the trucks it bought broke down. Subcontractors that were supposed to provide Internet and other things complained that Custer Battles didn’t pay them. After one meeting with U.S. officials the company left behind a spreadsheet which detailed how it asked Washington for $2.1 million worth of work that only cost $913,000. Custer Battles created fake companies to create false bills and high prices to bilk the American government. Despite that the U.S. gave it another $5.6 million in contracts before eventually banning it from future work in the country. No charges were ever made against Custer Battles. Washington continued to use the firm because it was desperate to complete projects. Not all companies were as bad as Custer Battles but plenty of others overcharged the government, didn’t complete work, mismanaged projects, etc. and got the same treatment because the situation was chaotic. There was a lack of oversight and all the emphasis was upon action even if it wasn’t working out. This also contributed to the failure to rebuild Iraq and a huge amount of wasted money.

All of this makes Blood Money a very good read. It is one of the few to concentrate solely on the reconstruction process and its many faults. Miller did a great job documenting how failure at the top trickled down throughout the rebuilding of Iraq. It then goes through example after example to give specifics of what exactly happened. How so many projects went wrong. How so much money was wasted. How companies that should have never been in Iraq got contracts and more. Most books are on how the America’s political plans didn’t work out and security quickly deteriorated. Blood Money focuses upon the third leg of that collapse when Washington couldn’t fulfill its promises to rebuild Iraq.