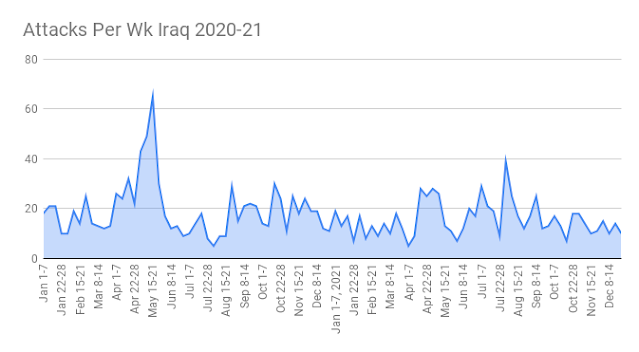 Pro-Iran groups are back to daily attacks upon American targets in Iraq. On the other hand, the Islamic State is in its usual winter hibernation but is targeting the security forces in its few attacks.

There were a total of 18 security incidents reported in Iraq from December 22-28. That was down from 22 the week before, but higher than the second week of December when there were 14 and 17 the first week. 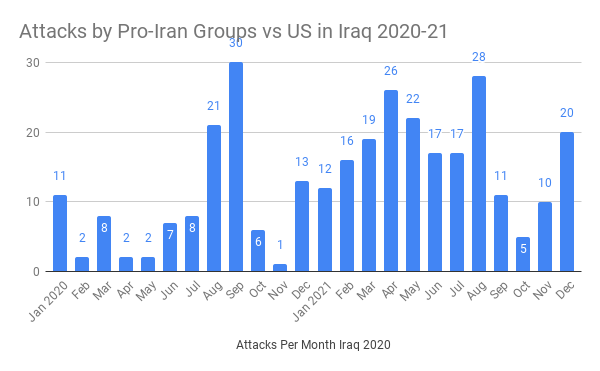 There were 8 attacks by pro-Iran groups during the week. Convoys working for the U.S. were hit by IEDs in Anbar, Babil, Baghdad twice, Diwaniya twice, and Salahaddin. Rockets were also fired at a Turkish military base in Ninewa. Incidents by these factions has gone up nearly every week of December. The first week there were 2 attacks, followed by 4 the second week, 8 the third week and 8 the fourth. There have been a total of 20 attacks in December, the most since 28 in August. They are also expanding outside of their usual areas of southern Iraq and Baghdad into Anbar and Salahaddin. These groups also believe that Turkey’s presence in northern Iraq is another occupation of the country which needs to end.

There were just 10 incidents by the Islamic State. Those were in Diyala (4), Kirkuk (2), Ninewa (2), and Salahaddin (2). Attacks by the insurgents have been in the tens and teens since the middle of September.

Those resulted in 11 killed and 27 wounded. 2 civilians, 2 Hashd al-Shaabi and 7 members of the Iraqi Security Forces (ISF) died and 2 civilians, 4 Hashd and 21 ISF were injured. Diyala had the most casualties with 23 followed by 13 in Salahaddin.

Despite the law level of activity by IS it is going after the security forces once again. In Diyala two IEDs left one soldier dead and 14 wounded. A security operation in the Hamrin Mountains in the northeast led to a confrontation that resulted in 3 dead soldiers and 3 more injured. Likewise in Salahaddin there was a clash during a sweep that resulted in the deaths of 2 Hashd and 4 more wounded. An attack upon a checkpoint with an ambush for the reinforcements that arrived resulted in 7 police casualties. Of the 11 killed during the week 9 were from the security forces and 25 of the 27 wounded were ISF and Hashd.

- "A convoy of logistical support for the international coalition forces targeted with an explosive device in Diwaniyah," 12/27/21

- "A convoy of logistical support for the international coalition forces was targeted with an explosive device, south of Salah al-Din," 12/23/21

- "A Convoy Of Logistical Support For The Int'l Coalition Forces Targeted In Babylon," 12/23/21

- "A Convoy Of Logistical Support For The Int'l Coalition Targeted With An IED In Anbar," 12/26/21

- "An explosive device targets a convoy of the International Coalition in the south of the country," 12/26/21

Shafaq News, "An explosion targets a convoy carrying equipment for the International Coalition in Baghdad," 12/22/21

- "In the third attack of its kind within hours, an explosion targets the international coalition in Iraq," 12/26/21

- "Seven policemen were killed and wounded in an attack in Salahaddin," 12/27/21

- "Two casualties and injuries from the crowd in a terrorist attack in Salahaddin," 12/22/21