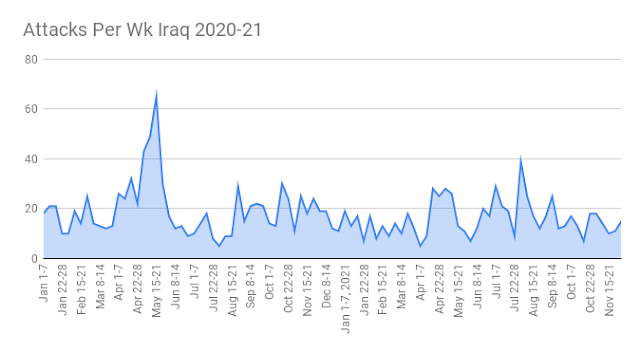 The winter break in Islamic State operations continued into the first week of December. For the last eleven weeks incidents by the insurgency have been in the teens or tens. On the other hand, pro-Iran groups have been picking up their operations against American targets now that the elections are over and the U.S. is supposed to withdraw its combat troops by the end of the year. These factions also carried out a bombing in Basra aimed at the security forces.

There were a total of 17 security incidents reported in the media in Iraq from December 1-7. For the three previous weeks incidents have been in the teens.

Those left 29 dead and 22 wounded. 4 members of the Iraqi Security Forces (ISF), 11 civilians and 14 Peshmerga were killed and 2 Peshmerga, 3 ISF and 17 civilians were injured. Irbil had the most casualties with 18 followed by 17 in Kirkuk. The other provinces were in single digits. 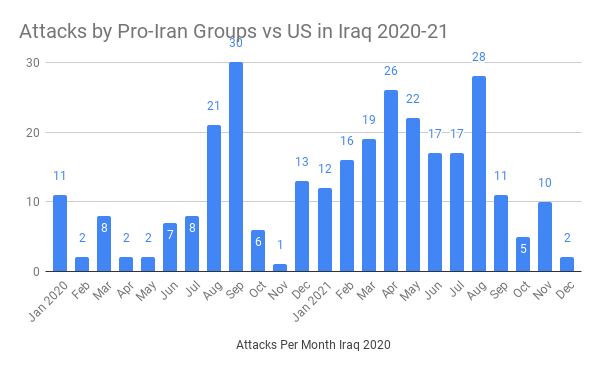 2 incidents were by pro-Iran groups. A logistics convoy working for the U.S. was hit by an IED in Diwaniya. In Basra however, a “death squad” was blamed for a motorcycle bomb in Basra city which killed four and left four more wounded. According to reports the bomb was aimed at a security official who has been investigating the group which might be affiliated with Kataib Hezbollah for attacks upon protesters, journalists, and activists.

The Islamic State was responsible for 15 incidents. Attacks by the group have been at that level since the middle of August. Insurgent attacks have gone down almost every winter since 2003.

Ninewa and Salahaddin had just one incident each. In Ninewa Hatra was hit by mortars and there was a home invasion in Salahaddin. IS has been focusing upon Hatra for the last several weeks. It sits in the southern part of the province. The militants are either trying to expand into the area or are already there and attempting to keep people out.

Kirkuk and Diyala had the most incidents at 5 and 6 respectively. Violence picked up in the former. There were three gun battles, Qara Salim was attacked leading to 5 dead and 6 wounded, and Lahiban was occupied by the insurgents. The town lies in the gap between the Peshmerga and ISF. IS often exploits these areas for attacks. In Diyala it was the usual mix of bombings and shootings, with three checkpoints targeted. Three of the incidents were in Muqdadiya in the center and one in Khanaqin in the northeast which are the main areas where IS has de facto control in Iraq. These are meant to intimidate the local population and security forces so that they don’t interfere with the group.

Besides the assaults on towns in Kirkuk the other big incidents occurred in Irbil. There the Islamic State attacked two more villages leaving 13 dead and 5 injured. This is part of a new strategy by IS to explore different parts of the country to test the security and see if it can move into the area. In November the group was probing Sulaymaniya and September they were trying Irbil. More of these types of incidents can be expected in the coming months.

Bas News, "Casualties Reported after IS Attack against Iraqi Army in Kirkuk," 12/8/21

- "A policeman and a civilian were injured when a sticky bomb exploded west of Baquba," 12/1/21

- "Kirkuk … thwarting ISIS infiltration of a village between the army and the Peshmerga lines," 12/4/21

- "A victim and two wounded in an attack by armed men in military uniforms on a house in Salahaddin," 12/3/21