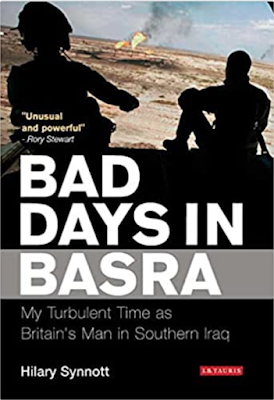 Hilary Synnott was the head of the Coalition Provisional Authority South (CPA-South) from 2003-2004 responsible for southern Iraq. He thought the job would be daunting when he took it and found it almost impossible when he got there. He said that the CPA failed because the U.S. and England never adequately planned for the post-war situation and never provided the resources necessary to make it successful. On top of that, CPA head Paul Bremer told Synnott he only cared about Baghdad and neglected the rest of the country. Bad Days In Basra, My Turbulent Time as Britain’s Man in Southern Iraq is the tale of Synnott’s experiences with the Coalition.

Synnott could see what he was getting into as soon as he heard about the job with the CPA. A Foreign Service officer told him that Iraq was a mess. John Sawers Prime Minister Tony Blair’s representative in Baghdad said that Synnott would coordinate between the CPA, the British military and the PM’s office. He would also have to work with the different ministries in London which often had dysfunctional relationships. The government was also coming up with a strategy on the fly which meant everything would be ad hoc. Despite all that Synnott accepted the position for the challenge. Everything he foresaw came true. There was no real plan for Iraq. London never provided the resources to make the CPA in the south successful. These were the causes for the organization floundering in Iraq.

Most books on the CPA focus upon Bremer and Baghdad. Bad Days In Basra is one of the few that looks at Iraq’s provinces. PM Blair said he wanted quick success in Basra including reconstruction which Synnott was supposed to lead. Then when he arrived in Iraq Bremer told him he only cared about Baghdad and the CPA’s financial adviser David Oliver said there was little money for the south. The Coalition’s reconstruction plans focused upon large, long term projects mostly using American multi-nationals. The British military also thought the arrival of civilian officials like Synnott would mean it could withdraw soon. Synnott realized that the army would not be leaving anytime soon because they needed to secure the civilians. He pushed for quick programs which would have immediate impacts upon the Iraqi population. Getting money for them proved to be a struggle however. That didn’t mean there weren’t successes like a police academy created by the Danes in Basra.  Mostly though Synnott was frustrated. With no plan or real direction from Baghdad people like Synnott had to come up everything on their own with their staff. The Iraqis felt neglected by the CPA and so did he. There’s nothing like being told thank you for your service but you’re not important. He knew his situation was near impossible when he took the job. He was shocked to find out just how bad it was.

Synnott’s Bad Days In Basra helps fill in some of the missing history about the Coalition Provisional Authority. We know that Paul Bremer made major mistakes with disbanding the Iraqi military and deBaathification and that his ideas of indirect elections were dropped by the White House. This book lets us know that it was even worse in the provinces where CPA officials like Synnott had to create programs to rebuild Iraq and promote local governance from scratch and very little money. London and Washington were as little interested as Bremer in the outcomes which put a lie to Blair and President’s Bush’s declarations that they wanted a secure and democratic Iraq.