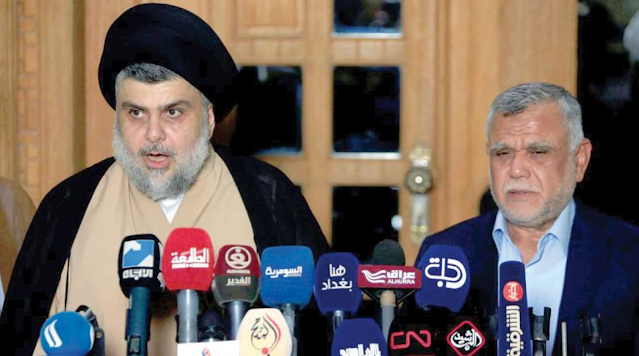 (Reuters)
Iraq’s political parties continue their maneuvers to form a new government. The two major groupings, one led by Moqtada al-Sadr and the other by Fatah and former prime minister Nuri al-Maliki are now attempting to win over independents as they await the certification of the election results.

After the final appeals were heard by the courts the major lists remained in the exact same positions. Moqtada al-Sadr’s Sairoon came in 1st with 73 seats, followed by Speaker Moahmmed Halbusi’s Taqadum with 37, Maliki’s State of Law with 33, the Kurdistan Democratic Party (KDP) with 31, the Patriotic Union of Kurdistan with 18, Fatah with 17, Azm with 14, and the National State Forces with 3.

These lists are divided into two major camps. On the one hand, Sadr has an alliance with Speaker Halbusi and the KDP’s Barzanis. On the other the Coordination Framework includes most of the other Shiite parties such as State of Law, Fatah and the National Alliance of State Forces. The Azm Alliance of financier Khamis Al-Khanjar is expected to join it because of his rivalry with Halbusi.

Now the political leaders are trying to get the 38 independents to join them. So far six have joined Taqadum, six have gone with Azm, six are now with State of Law and seven with Fatah. That gives Sadr 147 seats in parliament vs 86 for the Coordination Framework. The latter is no closer to getting a majority and outmaneuvering Sadr. Its main goal remains to push Sadr into accepting another national unity government like all the previous ones since 2005 and defeating his call for a majority government that could exclude Pro-Iran Hashd factions like Asaib Ahl al-Iraq that is part of Fatah. Real negotiations will begin when the results are certified.

- “Waiting for the announcement of the largest bloc that includes the Sadrists, progress and the Kurdistan Democratic Party,” 12/2/21