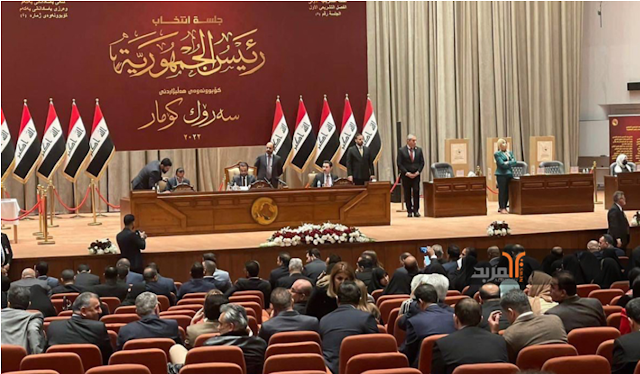 (Al Mirbad)
Moqtada al-Sadr’s dream of creating Iraq’s first majority government may be at a crossroads. His attempt to elect a new president was stymied by a boycott organized by his opponents in the Coordination Framework. There will be another try on Wednesday. Sadr will either be able to garner enough support in parliament or he will have to give into the Framework’s demands to be included in the next administration.

On March 26 Iraq’s parliament attempted and failed to elect a new president. The Coordination Framework organized a boycott that included the Patriotic Union of Kurdistan (PUK) and the Azm Alliance. The PUK wanted to maintain the presidency. It was opposed by the Kurdistan Democratic Party (KDP) that is now the dominant Kurdish party and wants to control all the top Kurdish positions as a result. The KDP is part of the alliance with Sadr. The Azm Alliance was with Sadr as well but defected for this vote. A member of the party said it wanted Sadr and the Framework and the KDP and PUK to come together and make a deal.

The Supreme Court recently ruled that two-thirds of all MPs were necessary to vote on the presidency. Because of the boycott the session was 18 parliamentarians short of a quorum.

The Azm Alliance’s move was unexpected, but then again not. Its leader Khamis al-Khanjar has always been an opportunist. He ran in the election against Parliament Speaker Mohammed al-Halbusi only to join with him after the vote. He could be hoping to gain more concessions by joining with the Framework to demand another national unity government.

The big question is what’s next for Sadr and his allies? If they can’t get enough MPs on Wednesday Sadr’s dreams of a majority government will go up in smoke. He will have to work with the Framework. At first he tried to split the list hoping to exclude his two longtime rivals former Prime Minister Nouri al-Maliki and Asaib Ahl Al-Haq. Iran’s Supreme Leader Ayatollah Ali Khamenei killed that effort when he became personally involved in the process and told the Framework it must stay together no matter what and demand that all of its components be included in the next government. That will likely drag out talks even more. It’s already been five months since the election.

Al Mada, “18 seats obstruct the presidential election session and postpone it to next Wednesday,” 3/27/22