England’s Guardian newspaper had two stories on October 17, 2010 that tried to explain why Moqtada al-Sadr suddenly changed course and decided to support Nouri al-Maliki for a second term as prime minister. At first, the Sadrists were one of the greatest opponents to Maliki’s return. Sadr called the premier a liar and said he could not be trusted. Then suddenly on October 1, the Sadrists announced that they would back Maliki. The Guardian claimed this happened due to a concerted lobbying effort orchestrated by Iran, Maliki, Shiite clerics, Lebanon’s Hezbollah, and Syria.

The effort to change Sadr’s mind about Maliki started in September 2010. First, Ayatollah Kadem al-Hussein al-Haeri, Sadr’s mentor who lives in Iran, called on him to reconsider his position on the premiership. Next, Maliki sent a delegation to Qom, Iran made up of one of his top advisers Tariq Najm Abdullah and his chief of staff Abdul Halim al-Zuhairi to meet with Sadr. Also present were Iranian Revolutionary Guards Qods Force commander General Qassim Suleimani, who has long been in charge of Tehran’s Iraq policy, and the head of Hezbollah’s politburo Mohammed Kawatharani. Later in the month Iranian President Mahmoud Ahmadenijad stopped in Syria on his way to give a speech at the United Nations to talk with President Bashar al-Assad. Assad had come out for Iyad Allawi and his Iraqi National Movement during the 2010 Iraqi elections, and even organized a meeting between Allawi and Sadr in Damascus in July. Ahmadenijad held a two-hour meeting trying to convince Assad of Maliki’s case, to get another voice to lobby Sadr. Moqtada was still not convinced however, and demanded consultations with Iran’s supreme leader Ayatollah Ali Khamenei and Hezbollah’s chief Hassan Nasrallah. The latter demanded that Maliki promise to not let the U.S. military stay in Iraq after 2011, the deadline set in the Status of Forces Agreement (SOFA) signed between Washington and Baghdad at the end of the Bush administration. Maliki allegedly conceded to not renew the SOFA in 2011. Both religious figures then advised Sadr to switch his support to Maliki. The Iraqi premier then sent chief of staff Zuhairi to Damascus to meet with President Assad at the Damascus airport to finally cement his backing. Finally, Maliki traveled to Syria on October 13 to meet with President Assad, and then headed off to Iran on October 18 where he met with President Ahmadenijad, Ayatollah Khamenei, Iranian Foreign Minister Manushaher Mottaki, and Vice President Rida Rahimi, along with Sadr in Qom, the first time the two had met face to face in five years. If the Guardian is right, it took this conglomeration of clerics and leaders to win over Sadr, and begin a regional movement in support of Maliki. That coalition now rivals Allawi’s foreign supporters in Saudi Arabia and Turkey, and swayed Syria away from aligning with them. 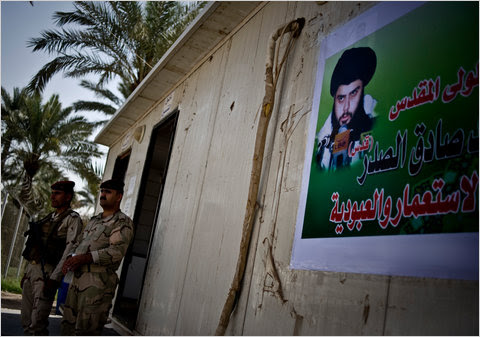 A poster of Sadr on a checkpoint leading to the Iraqi parliament building
Source: New York Times

In return for his change of heart, Sadr is making some haughty demands. It’s been reported that they are asking for seven ministries, the secretary general of the cabinet, and deputy ministers in all the security agencies. They have also allegedly demanded 100,000 government jobs, and the release of all Sadrist prisoners. One movement leader even said that they deserved 25% of the staffing in each ministry. The movement is also acting so presumptious that it has turned the tide in forming a new ruling coalition, that it has begun posting flyers and banners of Sadr and his assassinated father Ayatollah Mohammed Sadiq al-Sadr in and around parliament.

Sadr’s decision has also set off counter moves by the White House. U.S. Ambassador to Iraq James Jeffrey told the press that if Sadr had a leading role in a new government that might jeopardize Washington-Baghdad ties. The Americans have also reportedly told the Kurds that they should withhold their support for Maliki to block Sadr’s ascendancy. Iraq’s politicians don’t need any encouragement to drag out negotiations. On the other hand, the Kurds are now in a very advantageous position as they are the largest uncommitted bloc left, and can largely determine who will be the next premier. Using that leverage may be more important than listening to the U.S. right now.

Maliki is also trying to capitalize upon the turn of events. Besides his trips to Syria and Iran, he also went to Jordan. There are also plans to go to Egypt and Turkey next. If he can’t convince them to back his drive for power directly, he’s likely asking them to talk with Allawi to give up his desire to return to power, and throw his list behind Maliki’s instead. He wants Tehran to sway the Supreme Islamic Iraqi Council (SIIC) to his side as well. The SIIC is making a last desperate attempt to remain relevant despite losing most of their popular support since the 2005 election, and have nominated current Vice President Adel Abdul Madhi for the premier as a result. Maliki feels that the tide has turned in his favor since Sadr came out for him. Like Tehran, the premier is now working on the regional front to solidify his position.

Iraq is still probably weeks and even months away from forming a new government. Sadr’s decision to come out for Maliki was one of the first major changes in the stalemate that has been going on since the March 2010 election. Tehran had a leading role in Sadr’s choice organizing Syria, Hezbollah, and Ayatollah Haeri to all lobby him. That shows Iran’s ability to shape events in the country. This set off a chain reaction both within and without Iraq. The U.S. is now alarmed that the anti-American Sadr will have a leading role in any new government, while Maliki is on a regional tour to drum up support. That just increases Sadr’s influence, since he can rightly believe that all this activity is due to his actions. He’s likely to get most of what he wants in a new government, since not only did he drag out talks with other parties to maximize his position, he also has a political movement and a militia that can exert his will after all the talks are over. It’s just the latest example of Sadr being a political survivor after many had discounted him when his movement fractured, Maliki went after his followers in 2008, he disbanded the Mahdi Army, and then his candidates didn’t fare as well as expected in the 2009 provincial vote. At the same time, he was in almost the exact same spot in 2006 when he put Maliki into office the first time. That relationship didn’t last, so it’s wrong to think that Moqtada has suddenly reached a new apex. Iraq’s politics are like a soap opera with drawn out relationships, backstabbing, and plenty of drama, so what’s happening now, can always change dramatically in the future.

It's too bad that in such a (typically) thorough, detailed post, you miss the single most important factor in Sadr's decision to support Maliki.

Look at the ministries that SIIC controlled in the previous government -- powerhouses like Interior and Finance (and indirectly Defense, if I recall correctly). The most essential part of Sadr's agreement to back Maliki is that SIIC is cut out of the spoils, leaving those ministries open to greater Sadrist control.

Not only is that what brought Sadr over to Maliki's side (and forced the heretofore Tehran-influenced SIIC into bitter opposition), it's what the U.S. is so concerned about. The obviousness of this will become clear if you replace euphemisms in your post like "Sadr's influence" and "Sadr's ascendancy" with "Sadr's de facto control of Iraq's army and police" (a slight exaggeration, hopefully, but it makes the point).

Iranian pressure is a popular scapegoat, but it's a red herring -- Sadrists aren't boastfully putting up posters in/near the parliament because they were browbeaten by Tehran; they're doing it because they scored a deal that substantially increases their hard power.

I'ver never considered Sadr a puppet of Iran. At the same time you can't ignore Iran's role. I think Sadr was holding out in his negotiations over a new government to maximize his position, but I think the timing of his decision was due to Iran's push.