For the last few month, Prime Minister Nouri al-Maliki was largely able to suppress the protest movement in Iraq. A few hundred showed up in Baghdad’s Tahrir Square, and a few other cities each week, but that was nothing compared to before. On June 7, 2011 however, the premier’s 100-day deadline for reforming the government expired, and it turned out to be a hollow promise. In response, activists launched nationwide demonstrations in nine cities in northern, central and southern Iraq on June 10.

Protests occurred in Basra city, Hillah in Babil, Diwaniya in Qadisiyah, Nasiriyah in Dhi Qar, Najaf city, Kirkuk in Tamim, Mosul in Ninewa, and Karbala city. In Basra, the Democratic Trend and the Communist Party led several hundred in a march calling for early elections, government reforms, restoring factories to create jobs, and fighting corruption. The Youth for Change Movement organized 1,500 to come out in Diwaniya, Qadisiyah against poor living conditions, and demanded that the provincial government step down. 500 were seen in Hillah, Babil, and 300 in Nasiriyah, Dhi Qar. Dozens turned out in Najaf city demanding services, jobs, and fighting corruption. They said that if their demands were not met they would call for the provincial government to resign. Demonstrators chanted against the local government in Basra, and about poor services in Kirkuk. The Communist Party was again involved in the latter. Hundreds of activists were in Karbala as well. Despite a heavy security presence, there was still a protest in Mosul in Ninewa province, while the police and permits deterred similar events in Samawa, Muthanna and Wasit province. Iraq has not seen so many protests in so many parts of the country since February. Their motivation was the end of Prime Minister Maliki’s 100-day reform pledge. That ended on June 7, with no noticeable improvements in the government’s performance. Organizers had been waiting for that day to restart demonstrations after the authorities had largely suppressed them.

People even came out in support of Friday’s protests in other countries. In Cairo, Egypt the Committee for Organizing Demonstrations of the Iraqi Community in Egypt assembled outside the Iraqi Embassy. They demanded that U.S. troops leave Iraq and that the government commit itself to reforms. The Democratic Trend also held a gathering in California, which repeated many of the issues expressed by their brethren in Iraq. This showed that the expatriate communities in America and Egypt have begun organizing themselves to support the Iraqi activists.

The most troubling event of the day was in Baghdad’s Tahrir Square. The Square was the only place in Iraq that maintained weekly protests during the government’s crackdown. The security forces blanketed the area the night before. They cut off entrances, and placed barbed wire around the Square, and a vehicle ban was imposed in central Baghdad. When demonstrators started showing up in the morning they had to pass through checkpoints. Some of them were arrested. 400 ended up making it into the Square where they chanted against Maliki, and demanded better services such as electricity. They were vastly out numbered by 3,000 people who were trucked in by the premier’s Dawa Party from various provinces. They were given gifts and money in return for showing up. The security forces even set up tents for them, and gave them juice boxes. They chanted pro-Maliki slogans, and demanded the execution of 26 Al Qaeda members who were blamed for a wedding party massacre in Baghdad in 2006. This group ended up beating and kicking the pro-government protesters. Since Maliki has actively been suppressing protests in the last few months, it was no surprise that he would use his powers to try to shut down Friday’s assembly in the capital. The show of force by the police and the subsequent arrests were meant to deter activists from showing up at Tahrir Square. In a sly move aimed at the media, Maliki shipped in several thousand of his supporters to give the image that he was more popular than the protesters. Finally, the assault upon the demonstrators showed that the premier was always willing to use violence against dissenters.

With security greatly improved in Iraq, the citizenry has finally had the time to focus upon other issues such as governance and services. The country has been hit by twenty years of wars and sanctions, which have devastated its infrastructure. Despite the expenditure of several billion dollars in reconstruction funds, water, electricity, health care, etc., have not caught up with demand. That led to protests in 2010 over power shortages, which were put down by Maliki, and then this year’s demonstrations, which have hit on a plethora of issues from U.S. forces withdrawing to Maliki stepping down. It seemed like the prime minister had shut most of them down until Friday when they returned to almost every section of Iraq. This will likely start another test of wills between the organizers and the authorities, with Maliki obviously having the upper hand since he has all the powers of the head of state at his fingertips.

Tribesman going through security to enter Tahrir Square
The pro-Maliki crowd called on the government to execute an Al Qaeda leader responsible for a 2006 wedding massacre in Baghdad. This man carries a poster of some of the victims from that attack
Maliki took the time to tar his political opponent Iyad Allawi by passing out posters with his face and the face of the Al Qaeda leader responsible for the 2006 massacre side by side. Some of those posters were turned into a bonfire
Man hits an Allawi-Al Qaeda leader poster with this shoe to insult both of them
The security forces passed out juice to the pro-Maliki crowd at the square 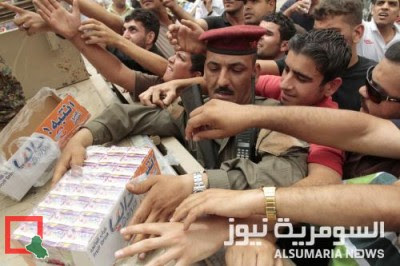 The pro-government crowd ended up attacking the protesters with sticks and knives
Protests in the rest of Iraq and beyond
Basra City, Basra 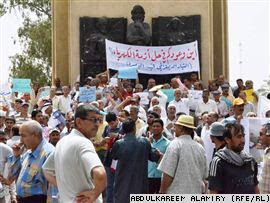 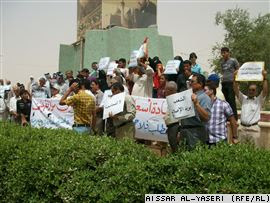 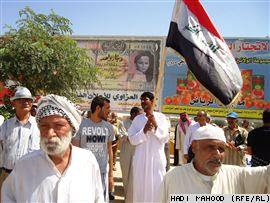 Thank you for the excellent photo roundup. Seeing all these images in one place like this is incredibly helpful.

The challenges and pressure will increase dramatically as the temp rises.

We shall see what happens next.

Yes it's going to be another test of wills of the protesters versus the government. The actual number of people have not been that many at each event, but the return of events across the country cannot bode well for Maliki. Having the pro-government people show up at Tahrir Square and then attacking the protesters was pretty ominous as well. It's one thing to have the security forces come in to break up protests, but turning to vigilantes in a country that already lacks strong rule of law is another step backwards.