On June 21, 2011 two liquor stores in the Karrada district of central Baghdad were bombed. The Iraqi police said that the businesses were targeted. Islamist groups, both Sunni and Shiite, have attacked alcohol stores in the past. This was just the latest incident in a campaign against what some consider un-Islamic practices, which has been going on since the 2003 invasion.

Islamic law forbids the drinking of liquor. In 2003, many stores that sold alcohol were attacked in the post-war chaos that enveloped the country. Anti-drinking laws followed, and alcohol bans were imposed on religious grounds. Despite that, nightclubs and liquor businesses flourished in Baghdad. When the sectarian civil war started in 2005, stores were again attacked, but then re-opened when security improved in 2008. By 2009, there were around 350 shops, bars, and clubs that served alcohol in the capital. The fall of Saddam Hussein released competing trends within the Iraqi public. Drinking was silently allowed in Iraq before 2003, and some wanted to continue with that freedom after the dictator was gone. Others turned towards their religion, and what they considered a moral life, because it provided an identity and authority in a shattered state. The conflict between those two trends played out with the back and forth over alcohol.


With the end of the sectarian war, those that wanted to drink and sell alcohol seemed to have the space to do so, but that started to change in 2010. In November, the Baghdad provincial council revived a 1994 law, which said that cafes and hotel restaurants could not sell liquor. Saddam originally passed the act during his “Faith Campaign” when he was trying to raise support for the government by turning to Islam. Back in May 2009, the Baghdad Tourism Authority used the same law to shut down more than 90 stores. In the January 2009 provincial council elections, Prime Minister Nouri al-Maliki’s State of Law list, led by his Dawa party, swept into power in Baghdad, winning a majority of seats, the governorship, deputy governor, head of the provincial council, and his deputy. Maliki ran on security, nationalism, and secularism. His party members proved to be much more religious, and tried to impose their views on the capital with the alcohol ban.

CNN video on reviving the Saddam era law in November 2010


The revival of the old law led to a new wave of crackdowns and attacks upon places, which sold or used alcohol. First, the act only allowed Christians and Yazidis to sell liquor, but they had to get a license. Many did not know how to get one, and according to one media report, no office in Baghdad claimed it had the authority to issue permits. The month that the law was brought back, security forces also began raiding bars and clubs. There were also a series of vigilante attacks, some of which might have been connected to the police or the provincial council. In December, other Shiite parties came out for the ban. Moqtada al-Sadr issued a statement saying that Iraqis needed to stand up against drinking and other bad influences. Clergy connected to the Supreme Islamic Iraqi Council (SIIC) also supported the anti-drinking drive, and Shiite imams bought up the topic at Friday prayers. It seemed like the Baghdad provincial council had the political and religious support it needed to follow through with its plans.

Pictures of a liquor store bombed in Baghdad, May 17, 2011
(Associated Press) 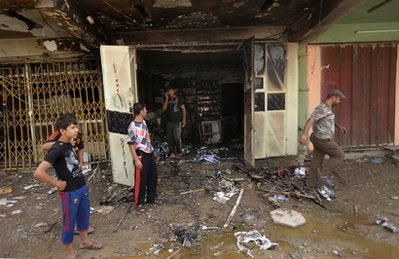 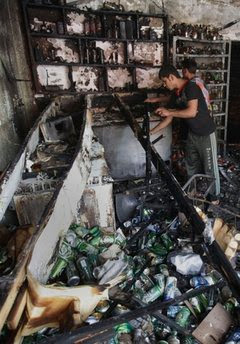 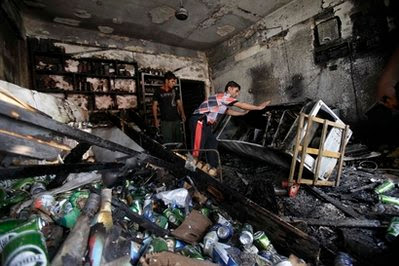 Liberal groups had their own ideas. In December 2010, there was a march in Tahrir Square in central Baghdad against reviving the Saddam era law. Some carried banners saying “Baghdad is not Kandahar” in reference to the Taliban’s stronghold in Afghanistan and their attempt to impose Islamic law on that country. The demonstration was led by the Writers’ Union and several civil organizations. When the protest movement started in Iraq at the beginning of 2011, there were some people that brought up the issue as well. Under that pressure, Premier Maliki allowed some clubs to re-open in February. At the same time though, attacks began again. An Interior Ministry official told CNN that from March to May, 25 stores had been bombed in Baghdad. Most of the victims were Christians and Yazidis, and they blamed Shiite Islamists as the perpetrators. In March, the police started raids again, and shut down businesses that didn’t have licenses. It seemed like there was a battle was going on in Baghdad between religious and secular forces, with the former having the upper hand since the Shiite political parties, government, and security forces were all with them.

Today, the topic of alcohol is still up in the air in Baghdad. Bombings like those in Karrada still occur. In April, the head of the Fadhila Party in parliament introduced a bill to ban not only the sale, but also the drinking of liquor throughout the country. He claimed the law, if enacted, would be legal because the constitution states that the country is an Islamic one. The conflict represents the two sides of the new Iraq. On the one hand, the fall of Saddam Hussein opened up the country to religious parties that still hold a large amount of power. Even State of Law, which presents itself as a non-sectarian, nationalist list, still has at its core the Dawa Party that was founded as an Islamist group that followed Mohammad Baqir al-Sadr, the father of Moqtada al-Sadr. The State of Law led Baghdad council was the one that brought back the 1994 law to ban alcohol in the governorate in an attempt to impose Islamic norms. On the other, you have Iraqis that want more personal freedom. Some of them are liberals, artists, intellectuals, and students that want all of the liberty that a democracy is supposed to include. They were the ones that took to the streets in December 2010 and February 2011 complaining that the Baghdad council was acting like the Taliban in Afghanistan. There are also just regular citizens who are Muslims, but don’t want a strict interpretation of their faith imposed, and would like to have a drink now and then. Since the Shiite parties hold office in the capital province, they have been able to carry out their alcohol policy, while militants have been able to do vigilante attacks with no consequences, and maybe even with official support. Which way this ultimately goes, could be a sign of which side will hold more sway over Baghdad, and perhaps the future of the country.

The last time I was in Amarah I used to go with one Iraqi friend get for me beer from young people linked to Mahdy militia. I was surprise also today when I read in Los Angeles Times that the son of our dear PM Maliki, current interior ministry, was responsible for some raids on USAID and American companies offices in teh Green Zone.

That's highly ironic that Sadrists would be selling alcohol because they were one of the main groups going around shutting down liquor stores.

Well I have been living alway in what Amricans call the Red Zone in Baghdad and outside Baghdad,mostly on the South. You can supervise projects and staff from Green Zone!!! As I wrote before the sadrist shelled beers undercover and after the shisha (water pipe),chess and music/dance was forbidden in Marshes area just they were enjoying the same things they have forbidden. Also is highly ironic how Maliki main support (Sadrist) are behind the killings of Iraqis and Americans.
Is also highly ironic as wrote Ned Parker yesterday in Los Angeles Times that Maliki son (Ahmed) is supervising the raids in Green Zone againts USAID and USAID implementing partners AECOM and RTI???