On June 6, 2011, five American soldiers were killed in Baghdad. Between three to five rockets were fired at Camp Loyalty, a forward operating base in the eastern part of the capital near Sadr City just before 7AM. They landed on a trailer where the five soldiers were sleeping. The troops were acting as advisers to the National Police in the area. Two militants were later found dead near a truck that was used to fire the rockets from. One missile misfired and killed them. The deaths came amidst a rise in activity by Shiite militias. 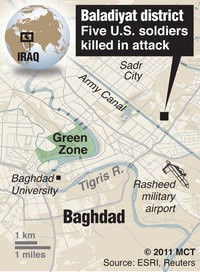 Special Groups and their Iranian supporters want to claim responsibility for driving the U.S. forces out of Iraq before the December 31 deadline for their withdrawal. That has led to a dramatic increase in attacks recently in Baghdad and southern Iraq against American bases and patrols. In February there were 93, going up to 128 in March, and 162 in April. Few of these are ever reported, and few lead to casualties. The last couple deadly attacks that were likely the work of Special Groups were two soldiers killed in Baghdad by an IED on May 22, one hit by an RPG in Qadisiyah province on April 29, two casualties from an IED in Numaniya, Maysan on April 22, one killed by rocket fire in Baghdad on April 2, and another by missiles in Babil province on the same day. In total, 27 Americans were killed in Iraq this year from hostile fire. Five of those were in southern Iraq, the stomping ground for militias, and an additional seven, including the five killed on June 6, were in Baghdad, which could have been done by the same types of groups.

The likely culprits were the Hezbollah Brigades, the League of the Righteous or the Promised Day Brigades. Abu Mahdi Muhandis, aka Jamal al-Ibrahimi, founded the Hezbollah Brigades. Muhandis joined the Dawa Party as an opponent of Saddam Hussein. He worked with the Iranian Revolutionary Guards’ Qods Force to carry out terrorist attacks upon the Kuwaiti royal family, and the U.S. and French embassies in Kuwait City in the early 1990s. He then joined the Supreme Islamic Iraqi Council’s (SIIC) militia the Badr Brigade, rising to become its deputy commander by 2001. Muhandis resigned his position in 2002 when the SIIC decided to work with the Americans before the U.S. invasion. He returned to Iraq after 2003, and set up a weapons smuggling operation from Iran to Iraq. He also trained militiamen fighting against the Americans. In 2005 he won a seat in parliament, and ended up fleeing to Iran in 2007 when he felt like he was going to be arrested for his militant activities. Today Muhandis is an adviser to the Iranian Revolutionary Guards Qods Force commander General Qassim Suleimani who is responsible for Iraq. His Hezbollah Brigades are considered directly under the control of Tehran. Qais Khazali founded the League of the Righteous. Khazali was a follower of Ayatollah Mohammed Sadiq al-Sadr who became an opponent of Saddam. When he was killed by the regime in 1999, Khazali was one of his close advisers that kept the movement alive. After the 2003 invasion, Khazali joined Moqtada al-Sadr as one of his top lieutenants. Khazali broke with Sadr over his cease-fires that ended the 2004 uprisings, and ended up forming his own militia. He would move back and forth with the Sadr Trend before finally being chosen by Iran to head the League of the Righteous. Khazali was captured by the Americans in 2007, and then released in a deal in January 2010. He and his group currently reside in Iran. Finally there is the Promised Day Brigades. In 2008, Sadr announced that he was standing down the Mahdi Army. He said he would retain a small and dedicated cadre of armed men however known as the Promised Day Brigades who would only attack American forces. Out of the three, the Hezbollah Brigades has the most active media campaign, posting weekly videos of their attacks upon American forces, which are later added to western operated sites such as Youtube and Daily Motion.

Iran has a history of increasing the flow of weapons and material to its Shiite allies in Iraq when it suites their political purposes. That’s likely the case today. They both want to see the Americans go, and are ramping up operations to claim that they were the cause. That’s led to the spat of attacks upon U.S. personnel. Fortunately, the Special Groups don’t have the means to do much more than what they are doing right now, and the campaign is likely to subside in a few months.