A New Year, And A New Escape From One Of Iraq’s Troubled Prisons

The very beginning of 2013 saw another prison escape in Iraq. Several death row detainees escaped from a facility in Salahaddin, likely with the help of guards or prison officials. Every year there are a number of escapes, and each time they are helped from the inside. This is a result of not only the widespread corruption throughout the country, but also a reflection of the dysfunctional criminal justice system. 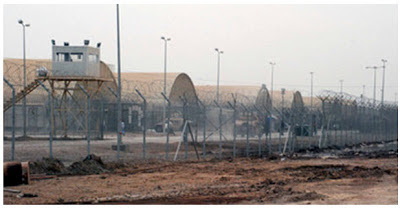 Taji Prison in Salahaddin has a long and troubled history of abuse, mistreatment, and escapes (Brussells Tribunal)

On January 11, 2013, around a dozen prisoners escaped from Taji prison in Salahaddin province. Some were members of Al Qaeda in Iraq, and all had been sentenced to death. They allegedly got out through windows in their cells in the morning, and were able to overpower several guards in two observation towers before they got out. Immediately afterward, the head of the guards and others at the facility were arrested to see if they provided any assistance to the detainees. This was the first escape of 2013, at a prison notorious for them.

Taji prison has a very troubled past. In 2010, when the facility was turned over by the Americans to the Iraqis, it was reported that Sadrist detainees were able to take over parts of it, imposing their will over their fellow inmates as well as guards. The next year, there were two major escapes. The first occurred in January when a militia commander from the League of the Righteous was able to slip out. Then in May, five Mahdi Army commanders were able to get out as well. In both cases, prison authorities assisted them, and the leadership of Taji was removed as a result. In February, there was also a hunger strike over mistreatment, and in June 2012, a protest over people being held without having a trial. Human rights organizations have supported some of these claims. In its semi-annual report in 2012, the United Nations reported cases of torture going on at Taji. That same year, the human rights committee in parliament said that it too found abusive treatment, prisoners being held for years without going to court, others with lost files meaning that they could not move forward with their cases or be released, and a lack of medical care. Overall, Taji is emblematic of the problems that Iraq’s criminal justice system suffers from. The Iraqi Reconciliation Society, which monitors prisons, claimed that there have been 4,000 escapes with inside help from 2006-2011. The Justice Ministry also noted that corrupt officials, political pressure, and sectarianism all contributed to the large number of breakouts. It promised reforms, but because detainees are held by at least seven different organizations, they would likely be ineffective. Many Iraqi officials are on the take, and the prisons are no different. People can secure release, a trial date, or an escape for the right amount of money. Political interference is another issue that can facilitate prisoners being released either legally or through escapes. The lack of accountability allows these abuses to take place, and continue.

Iraq’s entire criminal justice system suffers from a lack of due process and corruption. The fact that prisoners were able to get out of Taji prison, which has seen other such breakouts in the past, should be no surprise. Corrupt guards or administrators who were given bribes or threatened or pushed by politicians or a combination of all of them likely aided them. Little has been done to solve these problems other than to fire prison workers after the fact. Until the whole system is tackled in a comprehensive manner these cases will continue. That not only makes a joke out of the government, but undermines its fight against militants, because their arrest means nothing if their leadership is always able to get out.