How The U.S. Spent Billions On Infrastructure, Which Iraq Could Not Maintain

The United States continuously under estimated the magnitude of what it would take to rebuild Iraq. Originally, America had no plan for any kind of reconstruction believing that there would only be a humanitarian situation in the country after the 2003 invasion such as refugees, and food shortages. When the Coalition Provisional Authority (CPA) took over it then began a massive, multi-billion dollar rebuilding plan, but emphasized large infrastructure projects that had little immediate impact upon Iraqis. By 2005, the U.S. began switching to local reconstruction efforts that were supposed to be linked to a comprehensive counterinsurgency program, but that took two years to fully come to fruition. During the entire time what was neglected was the ability of the Iraqi government to manage and maintain the infrastructure that was being built and refurbished for it. Billions of dollars in power plants, water facilities, schools, etc. were being turned over to Iraqi authorities who either didn’t want or couldn’t run them. The Americans eventually tried to address this issue, but it came too little too late, resulting in massive waste. 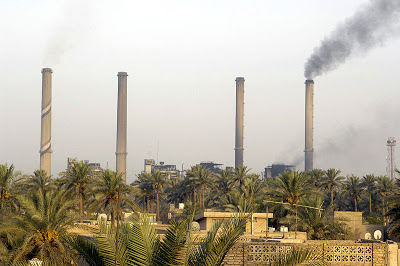 By 2006 the U.S. had spent $90 mil on the Dora power plant, but it was constantly breaking down due to the lack of maintenance and political pressure to produce as much electricity as possible (Wikipedia)

It took years for the U.S. to understand the importance of building government capacity in Iraq. Capacity is the ability of the authorities to effectively and efficiently run the country. In the fall of 2004, an officer from the United States Agency for International Development (USAID) found a water treatment plant outside of Hillah in Babil province that had $5 million in repairs done to it. The contract for the facility only included fixing it, so it was never connected to the city’s water system, and Hillah’s municipal workers were never trained on how to operate it. The U.S. had not transferred the plant to Iraqi control, and it was simply sitting idle and decaying. By 2006, $90 million had been spent on the Dora power plant that provided most of the electricity for Baghdad. In August, there was an electrical surge that knocked the facility out of service. Technicians there were not doing regular maintenance. The director generals at the Electricity Ministry told the managers at Dora that they should swap parts between the generators to keep them running, which wore them down quicker, and led to more breakdowns. The Ministry also forbade the buying of replacement parts unless there was an emergency, and that plants could not be shut down for routine repairs. This was all the result of pressure from Prime Minister Ibrahim al-Jaafari to produce as much power as possible. Basically, short-term political considerations were undermining the long-term health of the electrical network. These were two glaring examples of the shortcoming of the American reconstruction effort in Iraq. Many contracts only focused upon the immediate facility, and included nothing on maintaining them. The U.S. had pushed the rebuilding of the country’s infrastructure, and forgotten about the institutions and training necessary to run them. The result was that by late-2005 the Special Inspector General for Iraq Reconstruction (SIGIR) found that facilities, which the United States had spent billions on, were breaking down. These revelations slowly, but surely got the Americans to begin to address this problem, but it was never enough.

As early as the summer of 2003, the U.S. began training Iraqis to sustain the projects that were being worked on, but it ran into all kinds of problems. One was that USAID found out that the competence of Iraqi workers varied so widely that it was hard to set up any single training program that would apply to all of them. This added extra time and costs to try to include as many Iraqis as possible. Another was that training took place at each individual facility worked on by the Americans. In Iraq’s top down government system, those local facilities had little to no autonomy, and had to rely upon the ministries for everything. If the Baghdad agencies were not included then the assistance would go for naught. Third, there was no real coordination between the various American groups working on training. Therefore it was largely done on an ad hoc basis. Finally, maintenance was not included in this effort, something that USAID tried to warn the CPA about. CPA head Paul Bremer did not listen. As USAID Mission Director Spike Stephenson said, Bremer was only interested in buildings things, not sustaining or maintaining them. This would set the stage for major issues down the road. Not enough Iraqi workers were trained to adequately run the infrastructure that was being turned over to them. There was extreme dysfunction between the district, provincial, and central governments, with Baghdad trying to centralize power in their hands, and ignoring all the other levels. The U.S. tried to overcome those differences, but were only partially successful. That made it hard for all the projects the Coalition was working on to be maintained by the Iraqis, because a school built at the district level may not be accepted by the Education Ministry, and it would either sit idle or run out of supplies and funding as a result. That led to benchmarks for services not being met, and billions in dollars going to waste. By 2005, the U.S. became afraid that many of the projects it was leaving for the Iraqis would be unused, because it had not emphasized sustainment.

The U.S. response was to set up a number of organizations to address capacity building, but they all fell short of expectations. In late-2005, the State Department created the National Capacity Development Program, which focused upon 12 main ministries that included 65% of the government workforce, and 74% of the budget. The Iraq Reconstruction and Management Office was supposed to coordinate this effort, but it proved too big for it to handle. In March 2006, the Ministerial Capacity Team was put into place to manage projects by bringing together all the main stakeholders. That summer, the Ministerial Assistance Teams were set up to build capacity within the ministries of the new government that was taking office after the December 2005 elections. Around the same time, the U.S. Embassy put together the Joint Task Force for Capacity Development, which had almost the same job as the Ministerial Capacity Team of bringing together all the Iraqi and American agencies involved in reconstruction. Its lack of authority meant that it had little impact. USAID began the Tatweer program to train workers in the Planning, Finance, Oil, Electricity, and Water Ministries. It took a long time for it to get up and running, and in the end, the U.S. lacked the personnel to make it effective. The U.S. Embassy then created the Joint Executive Steering Committee that placed more advisers within the Oil, Finance, and Electricity Ministries. They came into conflict with the existing advisers, and the Iraqis did not like them either, so it ended up being a failure. By 2007, the State Department was trying to shut down many of these groups, because it wanted to consolidate all of their work within the embassy. An audit that year by the Government Accountability Office (GAO) found that the U.S. lacked clear goals in building the capacity of the Iraqi government, and that it often changed its goals, which undermined the effort. Like most of the reconstruction of Iraq, the Americans approached capacity building in an ad hoc fashion. That meant they were never able to fully meet the challenge.

In late-2006, the U.S. began focusing upon Iraq’s budget execution, because without adequate funding Baghdad would not be able to maintain its infrastructure and increase its services.  Overlapping authority and red tape made the transfer of money within the Iraqi bureaucracy difficult at best. The Planning Ministry had to approve all requests for funding, before the Finance Ministry would release the money. Like every other ministry, almost every decision at Planning and Finance had to go all the way to the minister himself before anything could be done. The U.S. tried to speed things up by placing dozens of advisers within the Planning Ministry to help with the approval process. The Americans also began daily assessments of budget performance, while Deputy Premier Barham Saleh started holding weekly meetings on the budget. This had some positive short-term effects. In 2005, Baghdad was able to spend $1.432 billion of its $6.316 billion capital budget, 23% of the total. In 2006, it spent slightly more at $1.615 billion, but that was out of $8.312 billion, only 19%. Finally, in 2007, that jumped to $3.435 billion out of $12.168 billion total, 28%. As Iraq’s budget has increased however, the execution rate has declined. In 2009, it spent an all time high of 89% of its capital budget. That then went down to 78% in 2010, and 33% in 2011. Capital budgets are of utmost importance to Iraq, because that is the money that goes into investing in infrastructure and the like. The gradual growth in spending in capital outlays showed that the United States was successful for a time in building capacity within the Planning and Finance Ministry. Yet, as the sums gradually increased with the growth of Iraq’s oil exports and the international price of petroleum, the bureaucracy was again overwhelmed by the task, and the execution rate has gone back down to almost what it was in 2007.

The failure of the United States to prioritize capacity building and sustainment within the Iraqi government right after the invasion was a major setback. The U.S. eventually tried to address the problem, but it didn’t get a sustained effort until 2006, three years after the overthrow of Saddam. Not only that, but the Americans always took an ad hoc approach, and lacked a unified plan. That didn’t mean there wasn’t some progress, and Iraqis didn’t increase their institutional know how, but the major deficiencies remain to this day. The bureaucracy is still incapable of spending all the money available to it, and services do not meet demand. The U.S. had grand plans for Iraq, but again and again it came up short.