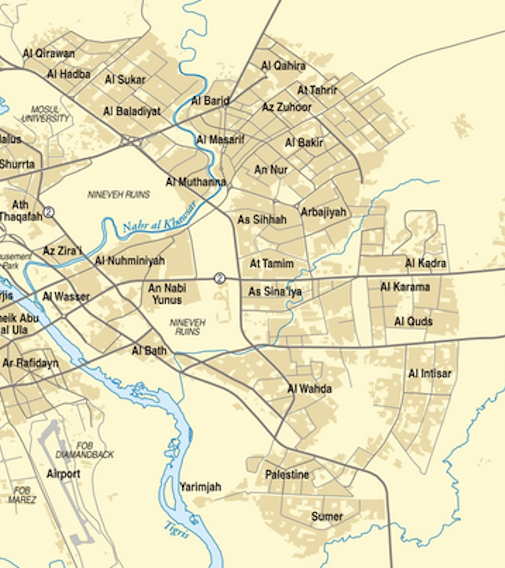 There was fierce fighting in eastern Mosul. The 9th Division tried to recapture the Salam Hospital in the Wahda district in the southeast section of the city. It took the facility on December 6, but it turned out to be an ambush by the Islamic State and it was forced out. Reinforcements were sent to back up the division as well. The 9th and 16th Divisions also attacked the Quds and Karama sections, both of which have been declared freed multiple times. The Golden Division and units from the 16th Division were surrounding the Sukar area. The Golden Division claimed it liberated that neighborhood on December 3, but that now appears to have been an exaggeration. The insurgents also launched suicide car bombs on four neighborhoods, and shelled five with mortars. An IED went off in a home as well. In total, 54 civilians were killed and 9 wounded along with 13 soldiers dying or being injured.

There was more news that the Iraqi forces (ISF) were finally going to attack southern Mosul. Units from the 20th and 5th Division joined the 15th Division. In recent days the Mosul airport has been bombed and the southern neighborhoods of the city shelled. The ISF were supposed to move on the city from that direction more than a month ago, but halted being busy clearing and holding areas.

In the west the Hashd continued to move through the towns of the Tal Afar district. Four more were taken. They will continue with this work until the Iraqi army and police take Tal Afar, which does not appear to be any time soon.

There was another report on the strain the operation is putting on medical facilities in Irbil. Many of the casualties from east Mosul are being sent to that city. The governor of the province said that the hospitals are running out of supplies. He called on Baghdad to deliver some. According to the United Nations hundreds of people have gone through the city’s hospitals already so they must be stressed.

Finally, Kurdish officials continue to go back and forth on whether they will surrender the territory they have taken during the campaign. Baghdad and Irbil signed an agreement that they would give up the land, but contradictory statements are constantly given. Bas News interviewed Peshmerga commander Hamid Afandi who stated that Kurdish blood had been spilled clearing Ninewa province, so they would not retreat. This is one of many political issues that will have to be resolved after Mosul is taken.

Bas News, “Erbil Running Out of Medical Supplies Due to Mosul Casualties,” 12/14/16

Al Maalomah "The death of 12 civilians from one family bombed by Daesh in central Mosul," 12/14/16

This Day In Iraqi History - Jan 15

1915 Sir Percy Cox reported some Arab sheikhs had given up ties with UK and joined Turks following calls for jihad 19...