On December 18 the Iraqi forces (ISF) were still trying to capture the Wahda area of east Mosul. Since December 14 elements of the 9th and Golden Division along with police units have been attempting to recapture the Salam Hospital in the Wahda neighborhood. Overall operations in the city have slowed in preparation for a second phase. Islamic State resistance, dealing with the civilian population caught in the middle of the fighting, and heavy losses have also hindered the pace of the campaign. Part of the new push will be reinforcements to the eastern section of the city known as the Left Bank. A new army brigade for example is being sent to support the 9th Division. 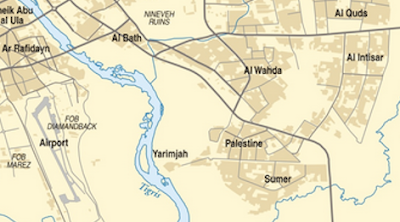 The United States is also shifting its tactics to help the ISF. U.S. air strikes are trying to hit roads along the lines of advance by the Iraqi forces to try to hamper car bombs. The Americans are also targeting car bomb factories. A drawback to this policy is the fact that the ISF is travelling through the city in columns made up of HUMVEES and tanks so cratering roads may impede them as well.

Human Rights Watch (HRW) released a new report on abuses committed by a Sunni tribal force known as the Hashd al-Jabour. Residents of the village of Shayalat al-Imam surrendered themselves to the Iraqi forces when they entered. A unit from the Hashd al-Jabour then arrived and ordered the residents to assemble. The Hashd divided the men from the women, and then took four of the former away and executed them accusing them of being Islamic State sympathizers. The ISF watched on during these events and did not intervene. This was the second time HRW has documented Sunni tribal forces committing violations during the Mosul campaign. Many of these units were trained by the Americans and were supposed to hold territory cleared by the army, police and special forces. It appears that some of them are poor quality and undisciplined.

Finally, the Mosul campaign was launched two months ago. It has been an extremely costly one for the security forces, Hashd, Peshmerga, and civilians. While the figures are incomplete due to government censorship and lack of access to the frontline the press and the United Nations have tried to document some of the losses. So far there has been 4,006 deaths reported and 4,699 wounded in the fighting from October 17 to December 17. Of those, the Islamic State executed 2,677 with another 238 killed and 117 injured in Coalition and Iraqi air strikes.

Face Iraq, “A military source: a new army brigade is being sent to strengthen the forces in Mosul in preparation for the start of the second phase of the operation,” 12/18/16