Review The Next Attack, The Failure of the War on Terror and a Strategy for Getting It Right

Review Benjamin, Daniel and Simon, Steven, The Next Attack, The Failure of the War on Terror and a Strategy for Getting It Right, New York: Times Book, 2005 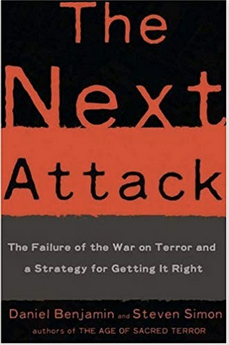 The Next Attack, The Failure of the War on Terror and a Strategy for Getting It Right was written by Daniel Benjamin and Steven Simon. They argue that the Bush administration was mishandling the war on terror after the 9/11 attacks because it misunderstood the jihadist movement, didn’t create an effective and coordinated anti-terror strategy, and made the situation worse by invading Iraq in 2003. For a book that was mostly written in 2004 it was way ahead of its time. Many of the issues it brought up would become mainstays of books written about the Islamic State after it declared its caliphate in 2014.


Most of the book dealt with the jihadist threat to the West. Al Qaeda went from success, the 9/11 attack, to failure, having much of its leadership rounded up and killed in the aftermath. It was able to inspire a new generation of extremists however like those that carried out the 2004 Madrid train bombing. Homegrown terrorists like the Spaniards posed new trouble for Europe and America. There was also the rise of Salafism, an extreme version of Islam, the Internet connected Muslims around the world and allowed radical groups to spread their message to millions, many groups were becoming more radical and justifying greater violence such as suicide bombings, killing civilians, and finally attacks upon other Muslims, and there were several hotspots around the world from Chechnya to the southern Philippines that radicals could exploit. The West in general was caught by surprise by this movement and made it worse via prejudice and discrimination against their own Muslim populations. For 2004 Benjamin and Simon were providing great insight on the jihadis. Almost all of these topics would be brought up again ten years later after the rise of the Islamic State as if that group was largely original when it was mostly building upon its predecessors.

The authors’ argument was that the United States was failing to effectively deal with this movement. They used several examples such as the Bush White House’s focus upon eliminating Al Qaeda’s leadership rather than dealing with the ideology of jihadism. Their main point however was that by invading Iraq in 2003 it confirmed what many extremist Islamists believed that the West was at war with Muslims. The U.S. also created a new terrorist haven in Iraq because it lacked serious planning before the war, and then made the situation worse afterword by expanding the potential base of the insurgency via moves like DeBaathification and disbanding the Iraqi military. The decision to invade also showed how the Bush administration when faced with the greatest terrorist attack in U.S. history, 9/11, focused upon what it knew states and specifically Iraq, rather than non-state actors like Al Qaeda. The argument that Iraq supported Al Qaeda and if it was given WMD it could carry out much more deadly attacks showed how Washington thought the real problem was a state sponsor rather than the terrorists. Many have criticized the decision to invade Iraq. The authors were some of the earliest to come out against it. They also added how the world view of the Bush administration and its misinterpretation of where the real problem lay after 9/11 led to the Iraq War.

The last part of the book is a bit dated calling on the Bush administration to create a better counter terror policy. It argued that the U.S. had to focus upon terror cells, keeping dangerous weapons out of the hands of them, protecting American facilities, dealing with the causes of radicalization, and better intelligence and law enforcement strategies. Benjamin and Simon believed that President Bush emphasized military means too much, and his choice to create the Department of Homeland Security was a grave mistake as creating a bigger bureaucracy was not the way to deal with extremists. At the very end, the two throw in a whole section on how Christian Evangelicals and their influence upon the U.S. made the war on terror harder by advocating unflinching support for Israel and their prejudice against Islam. This last third of the book isn’t as interesting as the rest because it’s more about a specific time and place in Washington after 9/11. Some of the points like pushing reform in the Middle East and outreach to communities there is still relevant, but other points are not. Throwing in Evangelicals also seemed to come out of the blue.

Most of The Next Attack is very interesting especially given the fact that the two authors noticed many of the trends in the jihadist movement years before anyone else. It’s dealing with the Iraq War was original as well. It not only brought up how the arguments for the war proved false, which many others have done, but explained how it was linked to the Bush administration’s world view. It also took the failures in Iraq after the invasion, and related it negatively to the war on terror. President Bush argued that he was fighting in Iraq so the U.S didn’t have to deal with extremists at home, but the war was giving rise to a whole new generation of jihadists that might not have ever been radicalized otherwise. Unfortunately, the ending is too focused upon what the Bush White House was facing in the 2000s, which isn’t as relevant today. It’s still a good read for those looking into Islamic terrorism and the origins of the war in Iraq.