Violence Continues Its Up And Down Pattern In Iraq 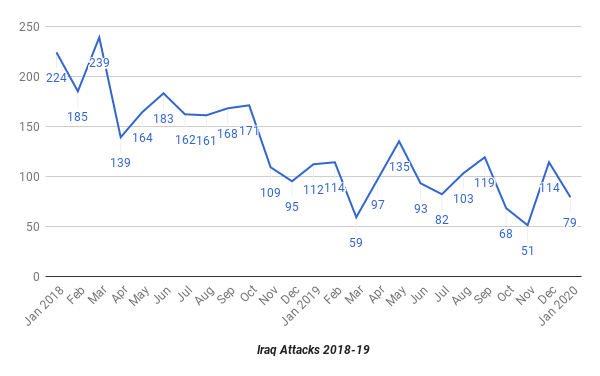 Iraq saw another drop in violence in the new year. In January 2020 there were a total of 91 incidents. 12 of those were by Iran and its allies, leaving 79 likely done by the Islamic State. That was down from 114 in December, but higher than the 51 recorded in November and 68 in October. That decline was due to the start of the annual anti-government protests. Every time they begin the insurgents hold off on attacks not trying to provide a distraction when Baghdad is being challenged. Eventually, IS went back to work in December, but now its dropped off again. It’s unclear what the cause was this time, but over the last year security incidents have constantly gone up and down.

The 91 incidents reported in the media in January were split across Baghdad, 27, Diyala, 23, Ninewa, 14, Kirkuk, 11, Anbar, 8, Salahaddin 7, and Irbil 1. 12 of those included 10 rocket and mortar attacks by pro-Iran groups upon military bases that house U.S. troops along with a missile strike by Iran against Anbar and Irbil in retaliation for the Americans killing Iranian Revolutionary Guards Quds Force commander General Qasim Suleimani and the deputy head of the Hashd Commission Abu Muhandis.

Those incidents led to total of 53 deaths and 139 wounded. 7 Hashd al-Shaabi, 22 civilians and 24 Iraqi Security Forces (ISF) died, while 1 Hashd, 30 civilians, 44 ISF, and 64 American soldiers were wounded. All the U.S personnel were injured from the Iranian missile strike on the Ain Al-Assad base in Anbar on January 7. Minus that and Baghdad had the most casualties with 28 followed by 26 in Kirkuk.

Anbar was the only province that saw an increase in violence with incidents going from 5 in December to 7 in January. Besides the Iranian attack there was also a rare car bomb targeting an army convoy, two kidnappings by IS, and two gun battles. Western Iraq used to be a major focus for the militants, but since the middle of 2019 it has become a secondary concern with single digit incidents every month. Instead of carrying out attacks IS seems to only be using the governorate to move men and material across the border with Syria. 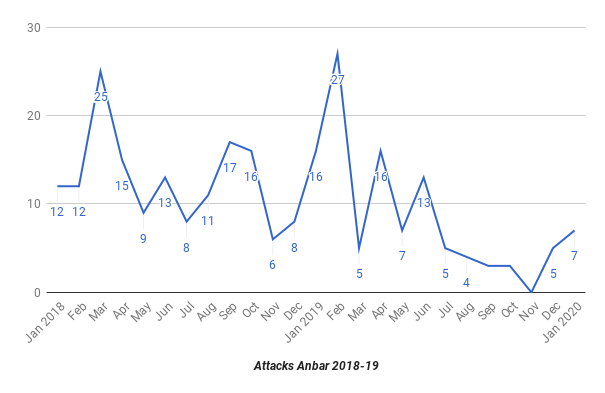 The insurgents’ attempt to re-infiltrate into the capital has stalled. In December and January there were 18 incidents each by IS. There was another motorcycle bomb, which the militants began using in Baghdad in November. Otherwise almost all the other attacks were shootings. There were also 9 rocket and mortar attacks by pro-Iran Hashd factions on a Baghdad neighborhood, the Green Zone, and Camp Taji. The last such attack actually hit the U.S. Embassy, setting fire to a restaurant and wounding three staff. For IS to remain relevant it must return to Iraq’s cities with Baghdad being the biggest prize. It was starting a program to move back there starting in the middle of 2019, but then dropped off after the protests began in October. It now appears to be starting all over again. As for the Iranian-backed groups, they are attempting to retaliate after the deaths of General Suleimani and Abu Muhandis. They have a long history of hitting the Green Zone and military camps dating back to the U.S. occupation. Almost all of these are fire and forget rocket attacks meant to harass the Americans. Striking the U.S. Embassy appeared to be dumb luck because the munitions used are unguided and highly inaccurate. At the same time, it shows that these groups are undeterred by threats by Washington to strike them if they kill another American. Then again, if that happened it would be by mistake not by design. 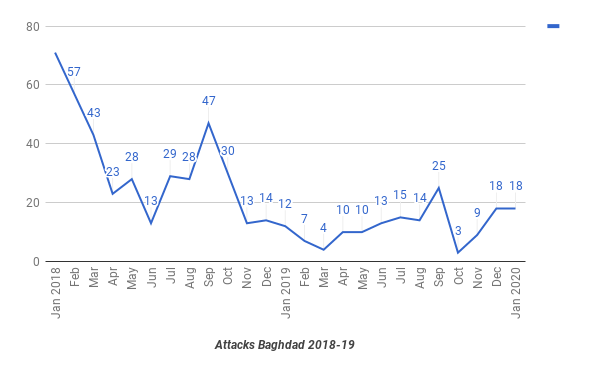 Central Iraq is where IS operates the most. The 23 incidents in Diyala mostly occurred in the center, 6, and west, 7. That was different from previous months when the Jalawla-Khanaqin district in the northeast was a favorite target. This highlights the fact that the militants are able to move across the province. The attacks included 2 attacks upon checkpoints, 4 infiltration attempts, 4 mortar incidents, a herd of buffalo were slaughtered to intimidate a town, and a fake checkpoint was set up leading to eight people being kidnapped. One of their bodies was found the next day. In Kirkuk, a squad of soldiers was attacked and one kidnapped, there was one infiltration attempt, there were 2 attacks upon checkpoints, and 2 gun battles. All but two of the 11 incidents occurred in the south where IS is based in the governorate. Ninewa saw 1 attack on a checkpoint, 1 infiltration, 1 kidnapping, and 2 shoot outs. Rockets were also fired at a base in the south that housed U.S. forces by a Hashd group. 11 of the 14 incidents happened in the south. Finally, Salahaddin saw 2 mortar and rocket attacks on the Balad Base by pro-Iran groups, while IS carried out 1 mortar attack, 1 assassination of a sheikh, and 1 attack upon a checkpoint. Almost every month Diyala is the most violence province in Iraq and January was no exception. Attacks in the other governorates have gone up and down. Ninewa and Salahaddin, like Anbar, used to be targeted regularly, but now appear to be secondary. Because southern Kirkuk was never really cleared of militants, that region usually has a regular string of attacks. What these all have in common is that the Islamic State is almost completely relegated to the countryside and mountains. This is in part by design. There is less government presence in the rural areas, and IS has built up de facto control of many areas in southern Kirkuk and central and northeast Diyala It is also because the authorities have a much firmer grip of the cities and the populations there are less likely to work with the insurgents after their experiences with IS rule. The insurgents are rebuilding now, but to make a comeback they have to consistently hit the cities. Whether that happens or not is completely up in the air right now. 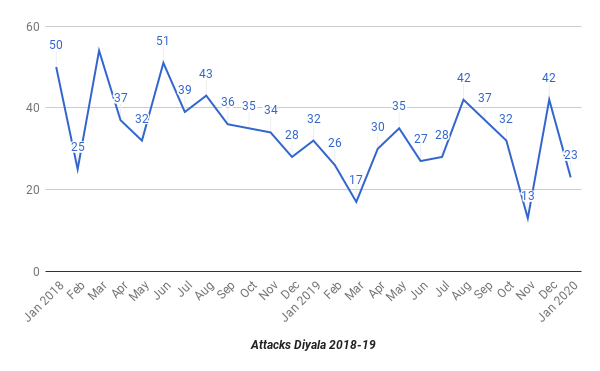 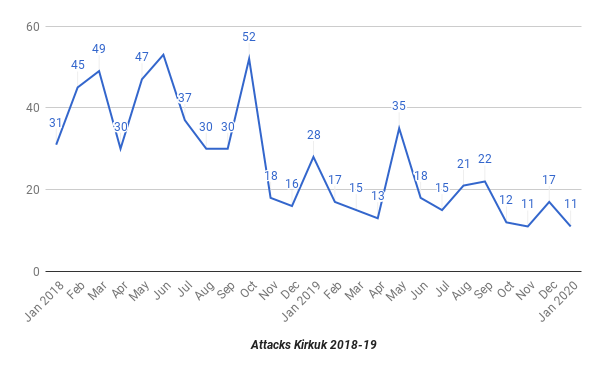 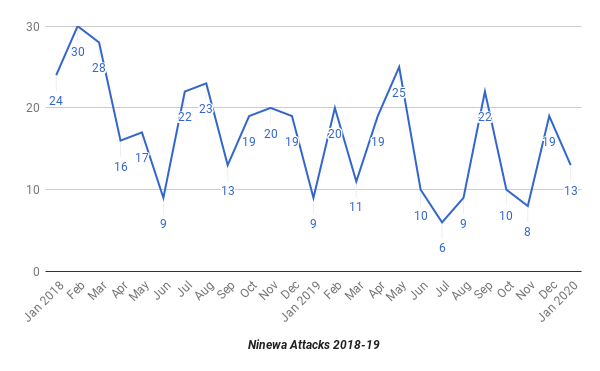 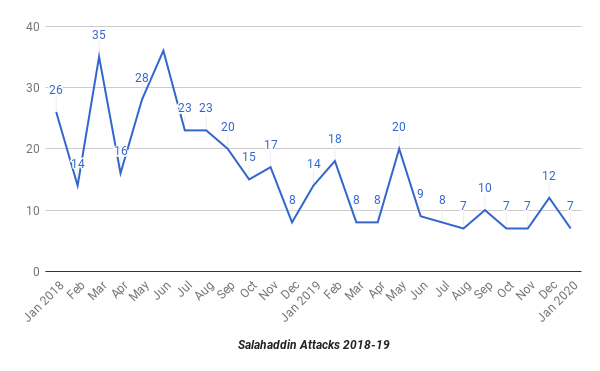 Al Forat, "The crowd thwarts an infiltration attempt by ISIS remnants in Hawija," 1/29/20
- “Urgent wounded 6, including two officers, by bombing the Balad base,” 1/12/20

Al Ghad Press, "A crowd member was wounded while foiling ISIS infiltration in Diyala," 1/4/20
- "The crowd thwarts an ISIS attack southwest of Mosul," 1/19/20

Al Mirbad, "Four members of the border guards were wounded by a terrorist attack, north of Al-Waleed Port," 1/13/19

NINA, "2 Katyusha Rockets Target The Green Zone Near The US Embassy," 1/9/20
- "The Body Of One Of the Seven Kidnapped Was Found In Diyala," 1/31/20
- "The Federal Police Confronted ISIS Members Who Tried To Sneak Into Dibis District," 1/17/20
- "Gunmen Attack A Tribal Mobilization Post South Of Mosul, Kill Two," 1/2/20
- "ISIS attacks a village on the border between Diyala and Salah al-Din," 1/16/20
- "ISIS Elements executed a herd of buffalo by firing bullets northeast of Baquba," 1/17/20
- "ISIS Infiltration Attempt On The Border Between Diyala And Salahuddin Thwarted," 1/1/20
- "The popular crowd repulsed an attack by ISIS in Al-Hadhar areas," 1/17/20
- "The Popular Mobilization Forces repulsed an attempted infiltration in the Sayid Gharib district in Al- Shallalat area," 1/9/20
- "A security element killed in a terrorist attack in Al-Muqdadiya district," 1/2/20
- "Three members of the police were killed and wounded in an ISIS attack on a security point northeast of Baquba," 1/2/20
- "Three soldiers killed and wounded in an ISIS attack south of Kirkuk," 1/18/20
- "Three soldiers were wounded by three mortar shells at Balad Air Force Base," 1/4/20
- "Two ISIS Terrorists Killed In Thwarting Infiltration In Northern Baquba," 1/4/20

NRT, "Iran's IRGC Targets Base Hosting US Troops In Iraq With Rockets: Reports," 1/7/20

Sky News Arabia "Our correspondent: 3 Iraqi soldiers were killed and a fourth soldier was kidnapped in an ISIS attack on a government site in Kirkuk," 1/5/20
- "Our correspondent: targeting the Qayara base, which includes American forces, south of Mosul, with three Katyusha rockets, without recording ay casualties," 1/31/20

Al Sumaria, "The crowd: ISIS assassinates a sheikh south of Samarra," 1/1/20
- "ISIS kidnapped three people after its exposure to the village north of Al-Waleed border crossing," 1/9/20
- "ISIS militants kill a civilian and burn his house south of Mosul," 1/23/20
- "Mortar shells land on an agricultural garden in Baquba," 1/14/20
- "The PMF foils an infiltration of ISIS south of Mosul," 1/10/20
- "The popular crowd confronted gunmen who opened fire on the checkpoint in central Baiji," 1/30/20
- "Two civilians were injured by a motorcycle explosion east of Baghdad," 1/11/20
- "Two Katyusha rockets fell within the approaches of the Green Zone," 1/20/20
- "Two soldiers were killed and three were wounded by ISIS in Kirkuk," 1/5/20