Review Iraq Between Occupations, Perspectives from 1920 to the Present 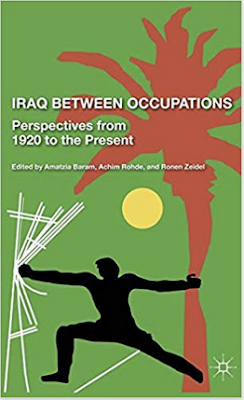 Iraq Between Occupations, Perspectives from 1920 to the Present was the result of a conference on Iraq held at Haifa University in 2007. It collected together the work of 14 different authors covering Iraqi identity and nationalism, the monarchy, Kurdish politics, and finally the post-Saddam Hussein period. Like any anthology there are ups and downs in the pieces, but fortunately most of the pieces are quite good adding some interesting insights into Iraqi history and politics.


The first two chapters highlight the positives and negatives of the collection. First is an article by Phebe Marr on Iraqi identity that spans the Ottoman period to after the U.S. invasion. During the Ottoman period people identified with their kin, tribes, religion, language and region, but there is disagreement over whether anyone felt a connection to the name Iraq which existed since the medieval times. When the Iraqi nation was finally created after World War I neither the British nor the new elite created a solid identity talking about pan-Arabism rather than Iraq. The monarchy to the Baath era was also dominated by ideologies such as Arab nationalism and Communism, and there was a constant struggle between those that talked about uniting the Arab countries and just focusing upon Iraq. The Iraqi state eventually gained a level of acceptance, but began to fray after the Gulf War with the Shiite and Kurdish revolts in 1991, and eventually collapsed after the overthrow of Saddam. Marr’s piece compares with the next one by Sherko Kirmanj, which argues that Iraq was always divided between pan-Arabism, the Iraqi state, and Kurdish nationalism. Like Marr, Kirmanj starts with the monarchy which promoted Arab nationalism, while Mahmoud Barzanji declared himself king of Kurdistan showing he didn’t want to be part of the new state. The problem was that he tried to make events fit into his thesis rather than basing his argument off of evidence. For instance, Barzanji wasn’t for Kurdish nationalism, but rather his tribe’s dominance. Later Kirmanj claimed that by the 1940s political parties were organizing along ethnosectarian lines but says the Ahali party was founded by Shiites and Sunnis and attracted some Kurds and the largest organization of them all was the Communists which was popular with all communities. That obviously is the exact opposite of his argument. Marr’s article fits in with other Iraqi historians that Iraqi identity has changed over time and has been based upon a number of different issues from kinship and tribes to ideology to ethnosectarianism. This is an important lesson for many westerners who take the current divides in the country as historical ones when they are recent developments. Kirmanj on the other hand was a writer with an argument that Iraq has always been divided without adequate evidence leading him to contradict his thesis several times.

Luckily, most of the articles have good insights. There’s a chapter by Amatzia Baram on the Sadrist movement’s rivalry with the Shiite religious establishment starting with Ayatollah Mohammed Sadiq al-Sadr who called for a revolution of Shiism against the top clerics that would have him usurp their authority. This led to the rivalry between Moqtada al-Sadr who continued to promote his father’s ideas against Ayatollah Ali al-Sistani and the Islamic Supreme Council of Iraq after the fall of Saddam. Ofra Bengio details the development of Kurdish politics from the founding of the Kurdistan Democratic Party to the creation of the Kurdistan Regional Government (KRG) to the demands of the public and new political parties like Gorran for reform and better governance. Retired Colonel Pesach Malovany has a chapter on how the Iraqis performed admirably against overwhelming odds in the Gulf War, but then because Saddam declared that conflict a victory were unable to adequately prepare for the 2003 invasion. These authors provide a good mix of history and analysis of political struggles that continue into the present time. Sadr for example, still considers himself the leader of the Shiite community against the claims of the other parties, while the KRG continues to try to maintain the status quo against growing calls for change. These works give a background to how these issues began.

On the other hand, there are a few chapters that are a bit dated. For instance, Professor Joseph Sassoon wrote about the Iraqi economy under the U.S. occupation, while Michael Eisenstadt had a chapter on U.S. security policy from 2003-08 and how the Americans could consolidate the gains they made during the Surge. These are now history, and didn’t have the staying power of the other chapters.

Overall, there is more good than bad collected together in Iraq Between Occupations.  The best chapters provide historical background to ongoing issues in Iraq like identity and nationalism to Sadr’s political philosophy. That is the positive side of compilations, they cover a variety of topics. That also means that there are inconsistencies as well, but those are outweighed by the positives in this book.