Review The Unraveling, High Hopes And Missed Opportunity In Iraq 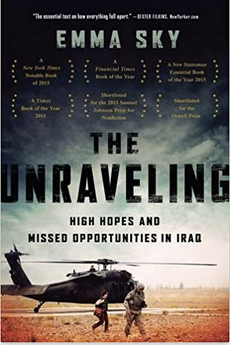 The Unraveling, High Hopes And Missed Opportunity In Iraq is the story of Emma Sky’s time serving in Iraq. Sky was a British activist who answered a call from London in 2003 for people to run postwar Iraq. She ended up being the governor for Kirkuk under the Coalition Provisional Authority. Later she returned to be the adviser to General Ray Odierno during the Surge in 2007, and then she went back a third time to be help Odierno again during the American military withdrawal. Her story is about the struggles of the early U.S. occupation of Iraq, then the success of the Surge, which was then undone when the U.S. pulled out.


The first section of the book covers Sky’s time working in Kirkuk for the Coalition Provisional Authority (CPA). Sky answered an email for help in Iraq and was sent off with no briefing. When she arrived there was no one to meet her. She traveled to Baghdad where she was assigned to be the acting governor in Kirkuk, again with no instructions on what to do. There she worked with Colonel Mayville and his 173rd Airborne Brigade. Kirkuk was a difficult province because it had a diverse population of Kurds, Arabs, Turkmen, Christians, and others represented by a variety of political parties all of which were making demands and complaining about the others. The CPA and London provided little support so Sky and Mayville were left to their own devices. They did the best they could to mediate between the different groups and create an inclusive government. Sky eventually moved to Baghdad to be the Kirkuk adviser to CPA head Paul Bremer. Things were little better there as Bremer’s political plan got shot down by Washington and then Ayatollah Sistani. Sky’s individual approach was to try to understand what Iraqis wanted rather than dictating to them. She was helped by the fact that she had travelled throughout the Middle East before and spoke Arabic which gave her a huge advantage over most people in the CPA who had little experience. Overall, Sky believed that the U.S. faced a strategic failure in Iraq in 2003 because of all of the mistakes it made. Most importantly, not having a plan for the country. That was shown by the fact that Sky and Mayville were never given any orders on what to do. Every province was just left on its own and suffered as a result. There have been many other books about this period and the problems with the CPA. Those mostly focused upon Bremer and what he did in Baghdad. Sky’s book adds what was happening out in the governorates and it was no better.

In 2007 Sky was asked to be the political adviser to General Ray Odierno who was the head of the Multi-National Corps-Iraq. Odierno had met Sky while she was in Kirkuk which was under his overall command at the time, and had been impressed by her work. Sky provided an outsiders view because she wasn’t American, wasn’t military, and wasn’t even a government official. Sky ended up working on several issues. First, she suggested breaking down all the different groups in Iraq that were fighting including the government as it was taking part in the violence to help figure out how to reduce the various causes of the conflict. That eventually became part of a policy to determine who could be reconciled with and who couldn’t, and the latter would be eliminated. Second, the Americans began organizing former insurgents and local militias into the Sahwa to fight the Islamic State of Iraq. The U.S. wanted those forces to eventually be integrated into the government, which was a struggle because Prime Minister Nouri al-Maliki didn’t trust the Sahwa. Finally, the Americans entered into talks with the Sadrists after they announced their militia was standing down. Sky provided insider information as to how the U.S. approached the Surge and the different strategies and tactics they tried to use to bring down the violence. Many times these cut both ways like the Sahwa who helped turn the tide against the Islamic State of Iraq, but was never accepted by the government, and led to further mistrust. The talks with the Sadrists also proved inconclusive.

Sky’s last tour in Iraq lasted from 2008-2011 when she was asked by General David Petraeus to be a political adviser again as the Americans withdrew their forces from the country. Sky found that the advances made during the Surge were being reversed by both the Maliki and Obama administrations. The reconciliation commission Sky had worked with during the Surge for example was being investigated by Maliki for trying to integrate the Sahwa. The premier was also exerting his power by taking on Sadr’s militia in Basra and Baghdad, created operations commands across the country to give direct orders to the Iraqi forces without having to go through the chain of command, amongst other things. Maliki was also becoming increasingly paranoid talking about Baathists working against him. Then the new Obama presidency wanted out of Iraq, and didn’t seem to really care about anything else. That caused problems when the 2010 elections came about and Maliki’s party came in second. He claimed massive fraud and another plot against him. The U.S. military and Sky wanted to support the political process and allow the winning list Iraqiya a chance to form a new government even though it would probably fail. The White House at first said that a deal had to be made between Iraqiya and Maliki, but then changed to backing the latter. Vice President Biden especially, believed that the prime minister was America’s man and would assure its interests. Sky was greatly discouraged by all of these events. The Americans hoped that the reduction of violence would lead to reconciliation so that the causes of the conflict could be reduced. Little of that happened, especially because Maliki believed people were trying to overthrow him. That escalated in the 2010 vote which he took as confirmation that there was a conspiracy against him. Rather than support the election, the Obama administration ended up backing Maliki. Sky thought that all the gains that had been made were dissipating as a result.

Sky presented an interesting perspective on the U.S. project in Iraq. Being an outsider she approached things in a completely different manner than the Americans. Unlike people like Bremer who thought they knew what was best for Iraq, she invested in getting to know the leading personalities in Kirkuk and then Baghdad, and worked on negotiating between them. She went from the frustration with the CPA’s dysfunction, to the success of the Surge, only to see the U.S. and Iraqi governments throw it all away. The Unraveling provides some behind the scenes insight into how the Americans and Iraqis attempted to deal with rebuilding the country, and from her view on how it came apart.