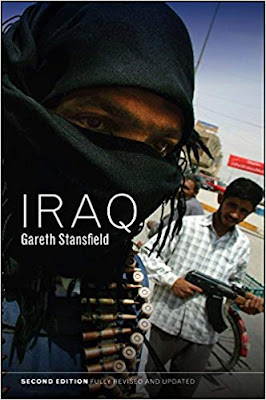 In Iraq, People, History, Politics Gareth Stansfield attempts to deal with four major questions about the country, while relaying its history. They are whether Iraq is an artificial state, the rise of ethnosectarian identity politics after the fall of Saddam Hussein, whether the nation was predisposed to authoritarian rule, and finally could a democracy be established there post-2003. There are both pluses and minuses to Stansfield’s approach to these subjects, which makes the book a mixed read.


The artificial debate is one that Stansfield deals with well. Many have argued that Iraq was not a “real” country because it was put together by the British after World War I out of three diverse former Ottoman provinces. The fact that the country fell into civil war after 2003 along with the rise of identity politics only increased that point of view. Stansfield disagrees with this argument. He writes that most states are artificial to some extent. While it’s true that Iraq was created to fit the imperial needs of England, Iraqi nationalism and state institutions developed showing that the country had staying power. This line of thought really came to the fore in the West, and especially in America after 2003. More importantly the author brings up the fact that the artificial debate was really given significance because people wanted to explain why Iraq became a failed state under the U.S. occupation. It either provided an excuse for the Americans’ mistakes or allowed people to write off the country entirely.

Identity politics is where Iraq, People, History, Politics runs into problems. Some believe that Iraq developed an identity under the Mandate, monarchy, military and Baath rule based upon Arab nationalism. That obviously did not appeal to Kurds however. Others think that Iraq never had a coherent image of itself. Stansfield wanted to combine these two views taking the position that Iraq has always been a society in flux. He also wrote that he didn’t want an essentialist view where Sunnis, Shiites and Kurds are always considered, but then he does exactly that. He constantly brings up ethnosecarianism even when it doesn’t seem to apply. For instance, he talks about how ideologies like Pan-Arabism dominated the monarchist period in Iraq, but then emphasizes how that didn’t appeal to Kurds and religious Shiites. He mentions the role of the Communist Party, but never mentions that they drew from all groups in the country. Then he tried to explain the rise of military rule in the 1950s and 60s as being related to Sunnism while acknowledging it had more to do with resentment over England continued influence over the country. On the other hand, he gets better when he explains the rise of identity politics post-03 as a result of the dual pressures of Saddam’s rule and sanctions that atomized society and broke down the idea of nationalism as groups were singled out for persecution based upon their religion and ethnicity. This uneven coverage is one of the main drawbacks of the book. Many westerns have taken the post-03 ethnosectarian politics and taken that as a norm and tried to apply it to Iraq’s past. Stansfield said he didn’t want to do that, but then he ends up doing exactly that.

These two topics highlight the good and bad sides of Iraq, People, History, Politics. It tries to breakdown four issues that were prominent in discussions of Iraq after the 2003 invasion. At the same time it gives a history of the country from the Ottoman years to the U.S. occupation. Some topics Stansfield does a good job with and others he falters. Other times it’s just a straightforward history that doesn't even deal with the four questions. That makes the book inconsistent overall, and even a bit dated in some parts. For example, very few talk about Iraq needing a strongman to hold the country together anymore. In the end, the bad outweighs the good with this book.