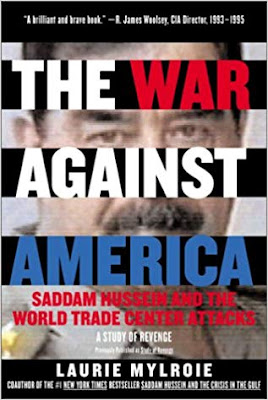 Deputy Defense Secretary Paul Wolfowitz was a big fan of Laurie Mylroie and her theories about Iraq. In April 2001, during the first discussion of terrorism by the new Bush administration, Wolfowitz brought up Mylroie’s claim that Iraq was behind the 1993 World Trade Center bombing, and therefore Baghdad not Al Qaeda should be the focus of any counter terrorism strategy. In June, the deputy secretary tried to get the CIA to look into Mylroie’s theory. On September 17, 2001 Wolfowitz sent a memo to Defense Secretary Donald Rumsfeld advocating for the United States to attack Iraq in retaliation for 9/11. He said there was a better than 10% chance that Baghdad was behind the strikes on New York and Washington D.C. He included the 1993 bombing. Later, he sent former CIA Director James Woolsey to England to find evidence to support Mylroie’s story. Finally in November 2001 Wolfowitz wrote Rumsfeld again saying that Iraq was probably involved in 9/11 based upon Mylroie’s ideas of links between Saddam and Al Qaeda from 1993. Mylroie’s theories about Iraq and terrorism were popular amongst neoconservatives like Wolfowitz, but were totally convoluted and later proven false by captured Iraqi documents.

In the wake of the Gulf War Laurie Mylroie went from a proponent of Iraq to one of its harshest critiques. During the 1980s Mylroie not only pushed the U.S. to back Saddam in the Iran-Iraq War, but tried to negotiate a deal between Baghdad and Israel. That all changed when Saddam invaded Kuwait in 1990. She not only called Iraq a threat to U.S. interests but came up with a complicated theory that the 1993 World Trade Center bombing was done by Baghdad. One of the bombers was an Iraqi named Abdul Rahman Yasin. After the attack he fled back to his home country where he was put under house arrest. Mylroie claimed this was a cover story and that he was actually an Iraqi agent. Another one of the bombers, Mohammed Salameh was the nephew of Palestinian terrorist Abu Bakr who lived in Iraq. Salameh called Bakr in 1992 and Mylroie claimed that was to get instructions from Baghdad. She would go on to claim that a third bomber Ramzi Yousef was actually an alias for an Iraqi intelligence agent who had assumed his identity. She later got a job at the American Enterprise Institute which published a book on her ideas in 2000. It was during this period that Wolfowitz read her work and became a fan. During the Clinton administration the FBI and CIA looked into Mylroie’s theory and found nothing to support it. That didn’t diminish her standing with neoconservatives.

After 2003 captured Iraqi documents unraveled Mylroie’s entire story. In 1994 Saddam and his advisers discussed the 1993 World Trade Center bombing. Saddam thought U.S. intelligence was behind the attack, while some of his advisers blamed Israel or groups in Saudi Arabia or Egypt. Saddam was open to all these ideas because he didn’t believe Abdul Rahman Yasin could have been involved. Yasin had fled to Iraq, been arrested and interrogated, but Saddam didn’t believe what he said and ordered more questioning. He in turn believed that Iraq could use Yasin as a bargaining chip with the United States. These papers showed that Mylroie’s entire conspiracy was nothing but nonsense. Iraq was not behind the Trade Center attack. Yasin was not an Iraqi agent. U.S. intelligence was right when they looked into the matter and found it lacking. What this really reveals is the thinking of neoconservatives like Paul Wolfowitz. They became so obsessed with Iraq after the Gulf War that they were willing to believe outrageous stories like Mylroie’s. It supported their own ideas about how evil they thought Saddam Hussein was.

Isikoff, Michael and Corn, David, Hubris, The Inside Story Of Spin, Scandal, and the Selling of the Iraq War, New York: Crown Publishers, 2006