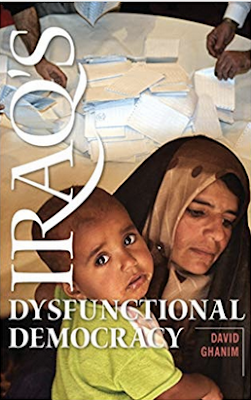 In Iraq’s Dysfunctional Democracy author David Ghanim questions whether the post-Saddam Hussein Iraq was moving towards a real representative government. He didn’t believe in imposing democracy upon other countries using force like the United Sates did in 2003, and saw few signs afterward that the new ruling parties were interested in anything other than staying in power and enriching themselves by stealing from the state. Ghanim has a long list of why he is disillusioned from the use of victimization by the elite, the politicization of deBaathification, the lack of rule of law, questionable elections, a weak state, and corruption. The book reads like one long argument or a diatribe, and the author is very convincing on many of his points.


Ghanim starts off with what he sees as the original sin, which were the mistakes the Americans made during the occupation. After overthrowing Saddam Hussein the Bush administration immediately found itself in trouble with no postwar strategy and rushed transferring sovereignty back to Iraq. The Americans turned to the Iraqi opposition to complete that process. The U.S. saw them as democrats, but they were not. When governments were formed they maintained the ethnosectarian quota system created by the Coalition Provincial Authority. That institutionalized identity politics, and allowed them to split up the state amongst themselves, and create their own fiefs in ministries to rob them. The parties used victimization under Saddam to justify their new status, and politicized deBaathification to get rid of whole sections of the bureaucracy and candidates they didn’t like in elections, while excusing their allies. Rather than make long term plans to build a democratic system in Iraq, Ghanim believes Washington panicked and took a series of shortcuts that undermined the process. It came to rely upon a group of new elites who had no vision for Iraq other than getting rid of Saddam, and who quickly turned to dividing up the spoils of their new found positions. At the same time, they claimed to represent their communities rather than individual Iraqis, and by 2010 changed the electoral system where it didn’t matter who won, but only the politicking that occurred afterward. The author made a good argument that none of these helped create a democracy in the new Iraq. It divided the country, and allowed the ruling parties to ensure that they stayed in power. That is the gist of his entire book, that Iraq is a dysfunctional state with an intransigent political system.

One drawback of the book is that because it is a diatribe there is a lot of repetition, and some specious reasoning. Ghanim returns to the same points over and over across several chapters even though each one is supposed to cover a specific topic. Victimization and identity politics for example, are two favorites of the author that he constantly brings up. He does this to emphasize his main argument, but at times it reads like a broken record. Sometimes he goes overboard as well trying to blame the victims for their fate. For instance, he writes that the ruling parties have to take responsibility for their own victimization under Saddam. He repeatedly talks about how bad Saddam’s dictatorship was, but then seems to think that those that opposed his regime couldn’t then play up being victims after 2003. That’s not a sound argument. Saddam ran a totalitarian government that killed thousands. Those types of regime always engender resistance. There are plenty of problems with the opposition parties that took power after his fall, but you can’t fault them for sanding up to Baathist rule.

In the end, Iraq’s Dysfunctional Democracy is an interesting read. It highlights many of the flaws and institutional problems within the Iraqi government. The book isn’t perfect with some distractions along the way, but it’s worth taking a look at to help understand why the new Iraq has consistently failed at good governance.