Review Out Of The Ashes, The Resurrection of Saddam Hussein

Cockburn, Andrew and Cockburn, Patrick, Out Of The Ashes, The Resurrection of Saddam Hussein, New York: Harper Perennial, 2000 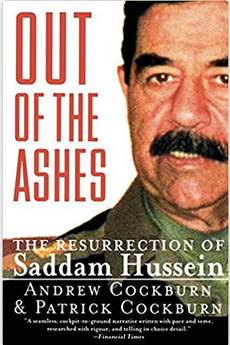 Out Of The Ashes, The Resurrection of Saddam Hussein was written by the Cockburn brothers Andrew and Patrick. It covered Iraq in the 1990s starting with Iraqi invasion of Kuwait to the Bush administration’s plots against Saddam to the United Nations sanctions and inspectors. The book goes back and forth between the hopes of the Bush and Clinton White Houses to overthrow and contain Saddam to his attempts to hold onto power, which proved quite successful. The Cockburns relied upon both press reports along with extensive interviews with Iraqis both inside and outside of the country to tell this story. As the title suggests, the authors believed that Saddam went from the depths of defeat to be comfortably in power during this decade, but at a heavy cost to his country.


The book starts with the Cockburns arguing both Saddam and Bush made mistakes during the Kuwait invasion-Gulf War. On Saddam’s part by 1990 when he invaded Kuwait there was no one left in the regime that would stand up to him. Foreign Minister Tariq Aziz made one little comment to him about how he thought it was a bad idea, but no one else said a word. Saddam completely misread how the world would react, and got no advice from his inner circle. Bush called for the Iraqis to overthrow the regime hoping that would lead to a coup. Instead it helped start the 1991 Intifada which the White House was unwilling to support because it was afraid Iran was involved and that Iraq might break apart. The uprising also ironically ended any hope of a coup as the military rallied around Saddam. Afterward there were many in America who believed the president made an additional error by not marching on Baghdad. The authors made a very astute observation that the Gulf War was a conservative one to return to the status quo ante not bring about real change to the Middle East. In the end, neither Saddam nor Bush were satisfied with how the war ended, and the Cockburns have good reasons why. Both believed their objectives were obtainable but misread the situation. Finally, the authors point out how outside observers also had high hopes, but the war was about returning stability not transformation. Even Bush wanted Saddam replaced by a general or another Baathist that would maintain the government. He didn’t want to shake things up which was why he never considered supporting the revolt.

Another two major issues covered in the book were the U.N. sanctions and weapons inspections. The restrictions on Iraq’s trade were originally imposed for its invasion of Kuwait. After the Gulf War however the Bush administration maintained them in part to contain Iraq and because it still held hopes that they could lead to a coup. All along the Americans knew that the victims would be the Iraqi public. As Deputy National Security Adviser Robert Gates said in May 1991 Iraqis “would pay the price” as long as Saddam stayed in power. The U.S. and U.K. were on the United Nations committee that went over all the goods that were allowed into Iraq and vetoed anything with dual use capabilities such as chlorine that was used to clean water but could also be used for WMD. The result was the middle class was destroyed and services collapsed. Raw sewage for instance was being pumped into Iraq’s rivers because the water treatment plants were not repaired due to a lack of spare parts. The humanitarian crisis eventually led to the Oil for Food program where Iraq was able to sell some of its petroleum again under U.N. auspices. Baghdad completely manipulated the system and the elite were able to make huge profits, while much of the public still suffered. The other part of this policy was the inspectors. Saddam originally thought they would only last a few months. In July 1991 Iraq decided to confess to the bare minimum about its weapons programs, destroyed much of its WMD stocks secretly, while hiding as much as it could. This would come to haunt Iraq for several reasons. First, it could never prove that it got rid of its stocks of chemical and biological weapons because it didn’t document it. Second, Baghdad’s concealment program led the inspectors, Washington and London to never trust the Iraqis no matter what they said. Thus the inspections became open ended because it was always felt that Saddam was hiding something. Finally, it led to brinkmanship between Saddam and Clinton in the late 1990s. Saddam knew that the sanctions would never be lifted so he had no reason to work with them and therefore played games with them like stopping and starting cooperation. For Clinton he increasingly wanted to punish Saddam for these actions, which would eventually lead to a series of bombings. The whole process ended by 1998 when Saddam expelled the U.N. team. The Cockburns lay out all the back and forth between the two sides during this period. By the end of the decade, Iraq and America were simply seeing who had the stronger will and the inspections had become secondary. This was another reason why the sanctions were never lifted and the Iraqi people had to pay the price. That was the Cockburns ending thought that the innocent civilians of the country were caught in the middle of this power struggle, and neither Saddam, Bush or Clinton cared. This was one another of the strengths of the book that it was able to get to the core of this conflict and its consequences.

Out Of The Ashes provides interesting insights into Iraq in the 1990s. It is a very easy and short read, but packed full of information. It’s obvious that the Cockburns were very well connected. They talked with government officials to common Iraqis to exiles to the opposition. During the decade Saddam went from military defeat in the Gulf War to almost losing power during the 1991 uprising. The U.S. believed it held the upper hand, but Saddam proved resilient. He was able to manipulate the inspections and the sanctions to his benefit and remained in power all the way until 2003. His country however fell apart and the developing society he helped create in the 1970s was destroyed in the process. That’s the authors final point, and a fitting end to the story they told.