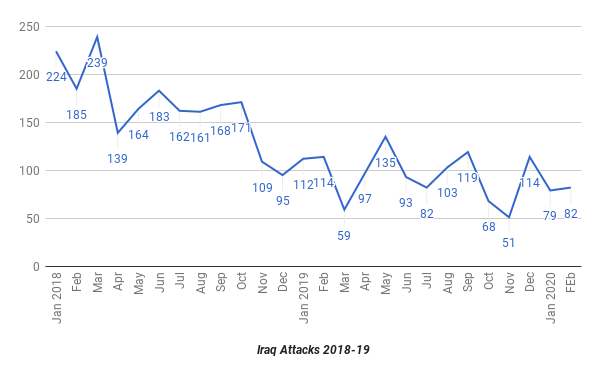 Violence across Iraq was largely unchanged from January to February 2020. There were 85 total security incidents during the month, 3 of which were likely done by pro-Iran groups as they targeted military bases that housed American forces. That left 82 probably carried out by the Islamic State. That compared to 93 total incidents in January, with 14 done by pro-Iran groups and 79 by IS. Attacks have been going up and down for the last several months. In September 2019 there were 119, then falling to a low point of 51 in November, likely the fewest incidents in the country since 2003. That was due to the outbreak of national protests in October, which has historically led the insurgents to back off when they begin. Then IS made a return in December with 114 incidents. Since then things have leveled off at the current level. Currently, the Islamic State doesn't appear to be strong enough to maintain any increase in the level of its operations. This is despite a very favorable situation in the rural areas where it works in with a minimal government presence, and a gap between the federal and Kurdish forces within the disputed areas of the north.


Security Incidents In Iraq By Province

There were 80 deaths and 103 wounded in February. 32 bodies were found in a mass grave in Ninewa leaving just 48 violent deaths during the month. 1 Peshmerga, 11 Iraqi Security Forces (ISF), 11 Hashd al-Shaabi, and 57 civilians lost their lives. Another 18 Hashd, 26 ISF, and 59 civilians were injured. If you eliminate Ninewa with the bodies found Baghdad surprisingly had the most casualties with 45, followed by Diyala with 43. The capital province usually doesn’t see that much violence but February was an exception.

Incidents dropped in Anbar and Kirkuk during the month. Incidents went from 7 to 5 in Anbar. The biggest event was when two checkpoints were attacked in the west with gunfire and mortars. Otherwise the rest were very small scale. In Kirkuk there were 11 incidents in January and then 8 in February. One of those was rocket fire on the K1 base that houses U.S. forces. This was the same camp hit before that caused the death of an American contractor that led to the retaliatory strike by Washington that killed Iranian Revolutionary Guards Quds Force commander General Qasim Suleimani and the deputy head of the Hashd Commission Abu Muhandis. IS carried out an attack upon a checkpoint, there was one gun battle, a village was attacked, and there were two kidnappings. Anbar has almost been forgotten by the insurgency, which is quite a change from when it was a core province. Kirkuk usually has the second or third most incidents, but overall violence has been trending downwards. Almost all the attacks there are in the south where IS has maintained a presence since 2014. 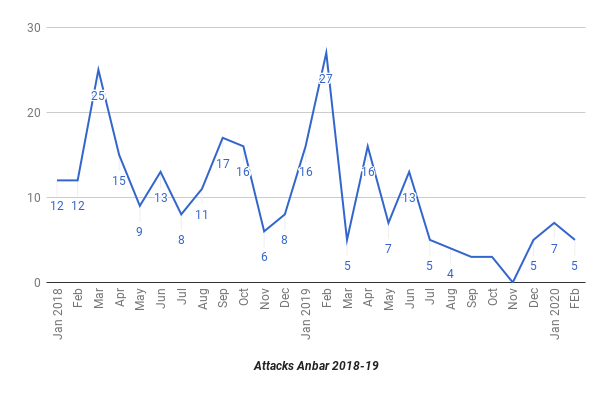 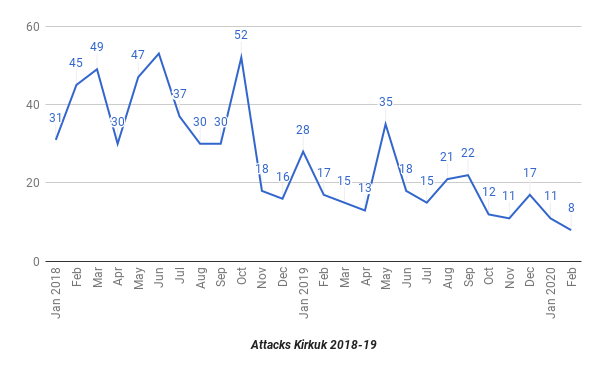 Diyala, Ninewa and Salahaddin saw little change between January and February. Diyala had 23 incidents in January and 24 in February. The militants carried out their usual mix of kidnappings, gun battles, and there were 8 attacks upon checkpoints. The Kurdistan Democratic Party office in the Khanaqin district was also bombed. There were 13 incidents in January and 12 in February in Ninewa. A mukhtar’s house was attacked, along with 2 checkpoints, and four mosques. There was also a very rare suicide car bomb used in an attack with no reported casualties. Salahaddin went from 7 incidents in January to 6 in February. That included a kidnapping, a gun battle, and a soccer field that was shot at. Diyala is the core area for the Islamic State. Surprisingly it had the second most violence during the month, something that rarely happens. The northeast Jalawla-Khanaqin districts were back to being the favorite target with 10 incidents there. The others were distributed throughout the rest of the province showing that IS has reach nearly everywhere in Diyala. Ninewa sees occasional spikes in violence, but it and Salahaddin are now secondary fronts for the insurgency. 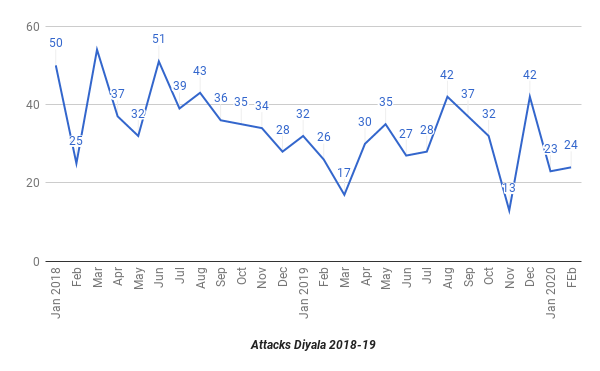 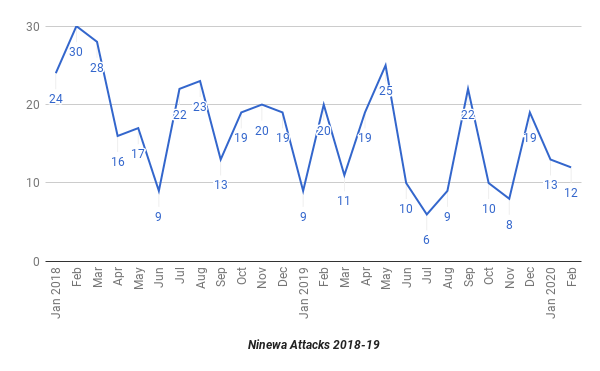 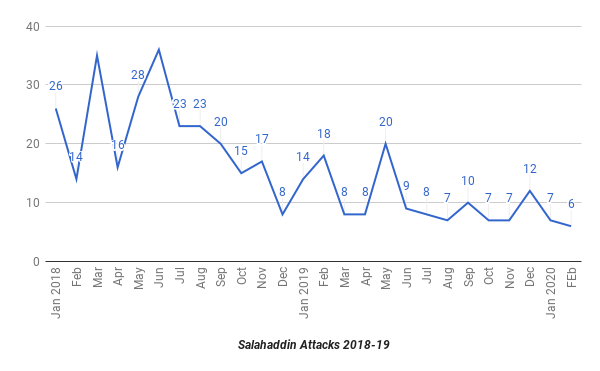 The biggest surprise of the month was that Baghdad had the most incidents with 25. That has not happened for months and months. One of those incidents were rockets fired at the Green Zone by a pro-Iran Hashd group. Most alarming was on February 8 when five IEDs went off inside Baghdad city itself, followed by February 22 when there were another 5. Most incidents in the governorate take place in the outer ring in the south, north and occasionally in the west. These attacks showed that IS is rebuilding its networks into the city proper. The last time multiple explosions were heard on a single day was December 25, 2019 when 2 IEDs and a motorcycle bomb went off. Before that it was September 16 and September 7, 2019 when there were 5 IEDs on each day. At the start of 2019 the insurgents were slowly but surely building up attacks in the province peaking at 25 in September. Then the protests began and IS withdrew not wanting to be a distraction when the Iraqi government was being challenged. It has started all over again going from 3 incidents in October, 9 in November, 18 in December and January each, followed by the 24 in February. Almost all of IS’s operations occur in the rural areas of the country. It has to return to the cities to remain relevant, and Baghdad is the most important because it is the seat of government. The fact that it has been able to get back right to where it was pre-protests is not a good trend. 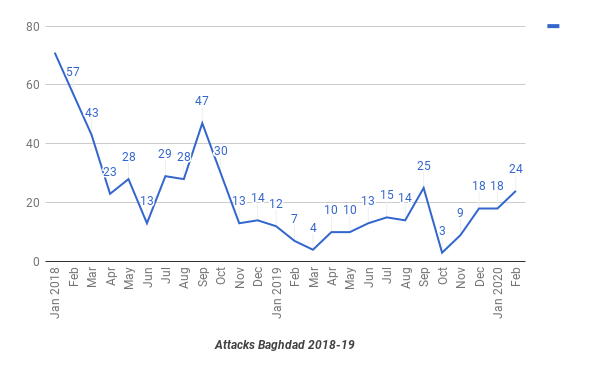 There were an additional 3 incidents in Makhmour in southern Irbil province. One of those was a rocket attack upon a camp with U.S. forces carried out by pro-Iran Hashd. The other two were 2 IEDs planted and a shooting at a displacement camp.

Al Ghad Press, "A civilian was killed and 2 others were wounded by ISIS sniper fire in Khanaqin district, northeast of Diyala," 2/6/20

Iraq Newspaper, "ISIS terrorist attacks a coffee shop in Ishaqi and kills members of the crowd of the Majmai clan," 2/23/20

Al Maalomah, "A landmine kills a shepherd and injures another in western Anbar," 2/8/20
- "A mortar shell fell near the US drunken fence," 2/21/20
- "One policeman was killed and another terrorist was wounded in northeast Diyala," 2/20/20

Al Mada, “ISIS attacks the security forces in separate areas of Iraq,” 2/8/20
- "Repelled the second attack of the organization in western Anbar in a week," 2/4/20

NINA, "2 Civilians Injured By An IED In Mosul," 2/11/20
- "3 Policemen Wounded Due To An ISIS Attack Northeast Of Baquba," 2/23/20
- "3 Soldiers Injured By IED South Of Mosul," 2/20/20
- "4 Civilians Killing And Wounding Due To Terrorist Attack In Balad, Salah El-Din," 2/24/20
- "An Attempt To Infiltrate ISIS Terrorists On Border Between Diyala And Salahuddin Foiled," 2/26/20
- "A Cemetery Found West Of Mosul, Containing The Remains Of 32 Victims Killed By ISIS," 2/17/20
- "A Civilian Wounded By An Armed Attack North Of Baquba," 2/25/20
- "The Commander Of Karmah Regiment Of PMF Injured," 2/25/20
- "Diyala: Abu Saida Suburb Is Subjected To Mortars Attack," 2/29/20
- "An explosion targeted the house of an employee of the security services in Abi Saida district, in Diyala," 2/15/20
- "Five ISIS elements were killed and a Popular Mobilization fighter was killed in Anbar," 2/29/20
- "ISIS Kidnapped Two Brothers on the Main Road in Northern Diyala," 2/2/20
- "A member of the tribal crowd was wounded by ISIS sniper fire in a liberated area in Diyala," 2/24/20
- "Mortar shelling and attack on a security point in Jalawla, in Diyala," 2/18/20
- "A Mukhtar killed and his son wounded in an ISIS attack west of Mosul," 2/26/20
- "A number of civilians injured in two explosive devices in Baghdad," 2/8/20
- "A number of citizens were injured in several explosions in Baghdad," 2/22/20
- "A number of citizens were wounded when four explosive devices exploded in different areas of Baghdad," 9/16/19
- "The PMF Respond To AN Attack Launched By ISIS In Khanaqin District Of Diyala Governorate," 2/21/20
- "The Popular Mobilization Forces Repel A Terrorist Attack Southwest Of Mosul," 2/6/20
- "The Security Forces Repel An ISIS Attack West Of Mosul," 2/2/20
- "Security forces repulsed an ISIS attack south of Mosul," 2/4/20
- "A Security source: A series of explosive devices hit the areas of Talbiya, Baladiyat and the 4th police targeting crowds of worshipers and processions of Husseini condolences," 9/7/19
- "Six civilians were killed and wounded in an ISIS attack on a village in Kirkuk," 2/18/20
- "A Soldier Killed By ISIS, South of Kirkuk," 2/28/20
- "A soldier was killed by a mysterious explosion inside a military vehicle, south of Baquba," 2/7/20
- "A terrorist was killed in an attempt to attack a security point in Diyala," 2/27/20
- "Two civilians were injured by an explosive device in Al-Shoura district, south of Mosul," 2/29/20
- "Two civilians were injured by an explosive device, western Mosul," 2/6/20
- "Unidentified Gunmen Assassinate A Soldier Near His House, South Of Baquba," 2/22/20
- "A wanted terrorist was killed by an armed clash in a village in Kirkuk," 2/13/20

Rudaw, "ISIS attack on a security checkpoint in Jalawla, killing and wounding 5 members," 2/17/20

Shafaaq News, "10 wounded in five bombings in the capital, Baghdad," 2/8/20
- "Dead in an armed attack targeting a coffee shop inside Ishaqi south Salahaddin," 2/23/20
- "Killing and wounding a number of people, including  traffic policeman, in separate incidents in Baghdad," 2/23/20

Sotaliraq, "8 civilians were injured by an ISIS projectile, north of Mosul," 2/12/20

Sputnik News, "Wounded by an explosive device in central Baghdad," 9/7/19