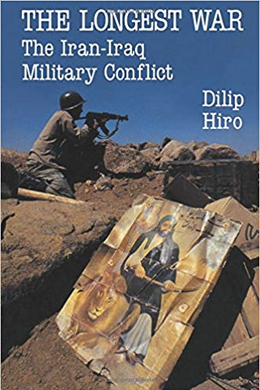 The Iran-Iraq War was the longest conventional conflict of the 20th Century. It cost thousands of lives and brought in countries from around the world mostly to sell weapons to the two combatants. Iraq invaded Iran believing that it could seize territory in the south and provoke a revolt against the new government led by Ayatollah Khomeini. Iran believed it could export its revolution to its neighbors and eventually overthrow Saddam Hussein. Dilip Hiro broke down the war into four main periods and provided two chapters on each. The first went over the progress on the battlefield and the internal impact of the war on Iraq and Iran. The second covered the international scene such as arms sales, etc. Hiro’s thesis is that the war was devastating to both countries, but ended inconclusively with no clear winners or losers.


Hiro begins The Longest War with some history of the border disputes between Iran and Iraq which lasted for centuries. In modern times, the Shah of Iran backed Kurdish rebels with the help of Israel and the United States to gain more control over the Shatt al-Arab waterway that provides Iraq’s access to the Persian Gulf. In 1975 the two countries signed the Algiers Treaty which fulfilled the Shah’s wishes. After the 1979 Iranian Revolution Iran and Iraq began skirmishes over border towns, and Tehran backed Iraqi opposition groups that attempted to assassinated Baathist officials. Baghdad responded by expelling thousands of Iraqis with Iranian heritage, executed Ayatollah Sadiq al-Sadr and his sister, and gave money to Iranian monarchists. This was all the background to the start of the war. The author explains how Saddam resented the 1975 Treaty and wanted to change it with the war. Tehran believed Iraq with its Shiite majority was the perfect place to expand its revolution. This provides a short introduction on how the two countries had a history of conflict.

That finally came to a head in 1980 when Iraq invaded Iran with high hopes but with no strategy. Baghdad believed that Tehran was also isolated after the revolution, was facing internal divisions, and was purging its military making it extremely weak. Saddam also wanted to regain control of the Shatt al-Arab and thought a war would make him the leader of the Arab world. Ex-monarchist officials from Iran were also feeding Saddam information that Ayatollah Khomeini could be easily removed. The initial goal of the Iraqi invasion was to seize Khuzistan province in the south, which had a large Arab population. It was also hoped that this would lead to a revolt against the Iranian government. The problem was Saddam had absolutely no plan for how to achieve these goals. Not only that but his military plans immediately went awry when it failed to destroy Iran’s air force on the ground the first day, and got stopped on the ground. The invasion started on September 22, and already by September 28 Saddam claimed Iraq had achieved its goals and offered a ceasefire. By September 30, Baghdad stopped its offensive operations. On October 20, Saddam went on TV saying that Iran’s military greatly outnumbered Iraq’s and thus the war had not gone as planned. Finally, in November Iran carried out its first attack, and would hold the upper hand until 1987. Saddam had completely misread the situation. Iran was not as meek and divided as he thought. The Iraqi invasion actually rallied support behind the revolution. Worse yet, Saddam had no strategy on how to achieve any of his goals, and when things went wrong he had nothing to fall back upon. This would lead to an eight year conflict, which The Longest War covers in great detail going from battle to battle.

The book also covers the internal and international impacts of the war. Iraq originally believed that it could fight the war and maintain its huge development strategy at home. The first year, it kept up its social spending, but that quickly ended as the war drained its foreign reserves and its oil exports were dramatically reduced, which earned it the vast majority of its revenue. There was also a huge drop in production as many working age males were recruited into the military or Baath Party militia. Similar things happened in Tehran with an austerity plan announced and high inflation. On the foreign front the superpowers ended up playing both sides. Iraq had a friendship agreement with Moscow and it was Baghdad’s largest arms supplier. At the same time, the Soviets hoped to improve relations with Tehran. The United States was opposed to the Iranian Revolution after its seizure of the American embassy. It sold billions in farm products to Iraq and provided it military intelligence. Then Reagan began selling weapons to Iran hoping to get it to free American hostages taken in Lebanon. That failed and humiliated the president. Countries also lined up to sell arms to the two nations. Syria and Libya were opposed to Iraq and backed Iran, along with North Korea, East Germany, Cuba, Israel, and Austria, while Saudi Arabia, Kuwait, Abu Dhabi, Qatar, Egypt, Poland, Brazil, Jordan and France were all aligned with Iraq. It thus became an international conflict mainly because countries hoped to profit from two oil rich nations fighting each other. The war also took a huge toll on both countries completely derailing their domestic policies. Ironically, the war shored up the support for both countries, first when Iran was on the defensive, and then in Iraq when Iran invaded.

Overall, The Longest War gives a very thorough history of the Iran-Iraq conflict. It covers not only the individual battles between the two sides, but what it meant for the countries, and how the world rushed in to arm one side or the other. Ultimately, neither side came out the winner. Saddam and Ayatollah Khomeini were still in power. The war became a bloody one of attrition, and as the two countries were wore down they eventually decided to end things with the battle lines almost exactly where they were at the start. Hiro does a good job with the blow by blow on the battlefront, along with the economic and political sides as well. For whatever reason there are very few books on this war, and out of them this is one of the better ones.