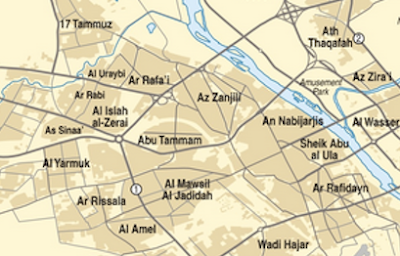 The major fighting in Mosul was on the new front in the northwest. The Golden Division and Rapid Reaction Division were attacking the July 17, Mesherfa, Najar and the Rifai neighborhoods. The Golden Division was also said to have seized large parts of the Zinjali area to the northwest of the Old City. The Federal Police were battling in the Old City, but that was still stalemated. The goal remains to liberate the rest of west Mosul, and then tackle the Old City at the end because the police have proven not up to the task.


The Associated Press was only the second group to interview people who either survived or witnessed the Jadida bombing. In March a suspected Coalition air strike hit the Jadida neighborhood leaving over 200 fatalities. The Iraqi forces immediately sought to deny the event. They first claimed that the Islamic State was responsible for the story and threatened legal action against reporters who covered it. They then released two deception stories about a car bomb and a booby trapped house as being the culprits, but those did not happen in Jadida. The Coalition admitted that it might be responsible for the bombing, and claimed that the Islamic State was using the building as a fire position prompting the ISF to call in an air strike. Neighbors and survivors of the Jadida incident denied that the insurgents were inside the building. One claimed that an IS member fired off some shots from the roof, but then left. People also denied the house was laced with IEDs. The owner of the house was taking in civilians not only from Jadida but ones that had been moving from neighborhood to neighborhood either because they were forced out of their homes by IS or were trying to escape the fighting. One family for example, had been kicked out of the Amil area by the militants, and had taken up in several other buildings before arriving in Jadida. Up to 100 people were inside the building as a result, accounting for the high casualty figure. The Los Angeles Times was the first paper to talk to Jadida survivors, and found similar stories. When the offensive started to capture west Mosul, both the Iraqis and Coalition said they would use more air strikes and artillery. This is part of the collateral damage resulting from that decision.

Finally, Reuters had a story about the education crisis in Ninewa. Many children did not attend school in the two years that the Islamic State ruled Mosul and most of Ninewa province. There are schools in the displacement camps, but many of them lack teachers, books, and supplies. The longer families have stayed at them, there is also pressure for kids to try to find work rather than an education to support their relatives. In liberated east Mosul there are now 320 of 400 schools opened. The Ninewa Education Department estimates that 10% of kids in the city are not attending, but that appeared a rough guess at best as there were no student counts for the last four years. Reports by the United Nations and aid groups that have surveyed Mosul have also found that while there are plenty of elementary schools open, there are hardly any secondary ones. There are also plenty of areas where kids are not attending. A few neighborhoods also have no schools, none of the teachers or administrators are being paid, there are severe book and supply shortages, and almost all the facilities are damaged. Getting these schools repaired and running again is a crucial step in the rebuilding process. The Ninewa government is attempting to push this as quickly as possible, but there are still severe restraints on what they can do due to personnel, capacity and money.

New Sabah, “Big preparations for the launch of large-scale military operation to eliminate the remaining IS areas in West Mosul,” 5/2/17

Youssef, Nancy, “The US Military Can’t Say If It’s Responsible For Strikes That Killed Hundreds Of Civilians,” Buzzfeed, 3/25/17