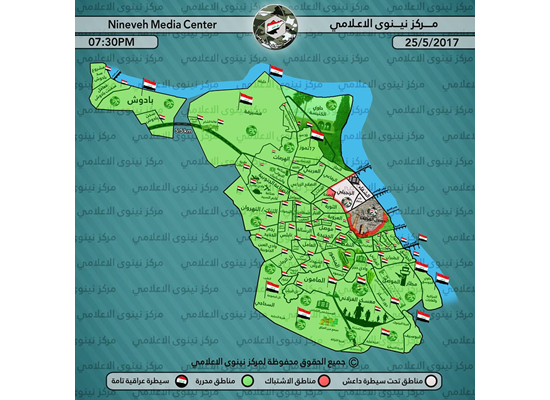 No combat was reported in Mosul during the day. That was because the Iraqi Security Forces (ISF) were gearing up for the final push on the city. The Joint Operations Command told the press that the city would fall in a few days. Even so, it warned that the fighting in the Old City would be difficult because of the narrow streets forcing the ISF to move into the district on foot. The ISF was also trying to get civilians to leave the area. Coalition spokesman Colonel Ryan Dillon wouldn’t give a timeline for how long the battle would take, but didn’t think it would be over quickly like the Iraqis. Finally, Badr head Hadi Amiri criticized the Coalition for only giving token support and blamed it for Mosul not being liberated yet. Iraqi announcements are always positive because of its victory narrative. It wasn’t that long ago that they were claiming that the west Mosul would be so much easier than the east because most of the Islamic State fighters had fled. That didn’t happen. Amiri on the other hand is an ally of Iran and always looks to denigrate the work of the Americans and its allies as a result. Colonel Dillon was probably the most realistic. Mosul will fall, but no one can be sure how long it will take.


There was another story of looting inside Mosul. Activists in the city warned of growing numbers of robberies with people stealing from abandoned homes. These types of reports have been going on for several months now, and have included gangs as well as government officials and members of the Iraqi forces. Security needs to be a main priority if the authorities are hoping to restore life to the city.

In western Ninewa the Hashd were in the second phase of their operation. The Sinjar military base, four villages, and an apartment complex of Baaj were also seized during the day. Asaib Ahl Al-Haq spokesman Jawad Talabawi shot back at Kurdish criticism of the campaign by saying that the Hashd had the right to enter Sinjar and didn’t need the Kurds’ approval. He went on to say that the Kurds could complain all they wanted about the Hashd’s presence because they were not leaving. He finished by saying that President Massoud Barzani was following a foreign agenda. The Sinjar mayor who is allied with Barzani asked where Asaib Ahl Al-Haq was when the Peshmerga freed most of the district and that it was the Hashd who were under foreign influence. Barzani’s Kurdistan Democratic Party (KDP) is struggling to maintain control over the Sinjar district, and don’t want the Hashd to be there to cause more problems. Many of the Hashd forces like Asaib Ahl Al-Haq are opposed to the Kurds’ ties to Turkey and calls for independence, and have entered Sinjar as much to fight the Islamic State as to provoke the KDP.

There was more news about the Jadida bombing. The executive summary of the U.S. investigation into the bombing added a few more details to the story. The Golden Division called in an air strike after it was engaged by two snipers a top a building. A GBU-38 500 pound guided bomb was used. The bomb caused explosives inside the building to detonate and brought down the structure. Inspectors found residue of other explosives not associated with the GBU-38, which was the evidence that the insurgents had placed some of their own inside the house. The Islamic State had entered the area a few days before, and evicted families to use their homes as fighting position. The displaced were invited by a neighbor into his house, which was the one hit. IS fighters told people in the building that they should move north because of the fighting, and if anything happened to them it was not their fault.  The deputy head of the Ninewa council called for the U.S. to pay compensation to the victims since it was responsible. Locals also disputed the American’s version of events. Survivors and neighbors of the bombing along with General Mohammed al-Jawari the civil defense chief in Mosul told the Associated Press and Washington Post that there were no explosive inside the building. Civil defense teams that clear out the rubble from battle damage also said they pulled out more than 200 bodies that day, and that more than one house was destroyed. The incident was such a traumatic event with so many victims that there is sure to be continued controversy over it for the foreseeable future. It isn’t helped that the Americans hit a house to take out just two snipers. The situation is further complicated by the fact that the Iraqi government told people to stay inside the city, the ISF knew that the militants were using human shields, and residents have been sheltering inside basements during the fighting. Those all add more questions as to why the Iraqis and Coalition increased the use of not only air strikes but artillery and mortar fire inside Mosul if they knew there was a greater chance to cause civilian casualties.

Speaking of controversies there was more over the Der Spiegel article. The German magazine published a piece by an Iraqi photographer accusing the Rapid Reaction Division (RRD) of torturing and killing IS suspects during the Mosul campaign. The spokesman for the RRD said that the unit released two videos interviewing people who were in Der Spiegel refuting the story. On the other hand, a member of the Baghdad Security Council told TRT World that the Iraqi forces kill IS members. He said, “Yes, we kill ISIS. If we capture an ISIS, we do kill them.” After that he went on to say that Der Spiegel was spreading IS propaganda. The Iraqis are doing a poor job to counter the Der Spiegel piece. On the one hand the videos are a powerful response. At the same time, the commander of the ERD unit told ABC that he didn't take prisoners and that he was proud of his abuse, which was backed up by the Baghdad Security Council member. Abuse is institutionalized within the ISF, so there’s no surprise that this story emerged. Human rights groups have also found Iraqi forces posting videos of killing prisoners before.

The climax of the Mosul battle is leading to the largest displacement from the city so far. The International Organization for Migration counted an average of 10,000 people per day fleeing the city. On May 18 approximately 16,100 left, the largest single day count since the campaign started in October 2016. At the same time, a total of 117,732 people have gone back to east Mosul, and another 34,841 to the west. The displaced continue to talk about the hardships people face within the areas under IS control including eating grass and weeds for food. The insurgents are also threatening to kill anyone that attempts to escape. The situation is likely to get worse before it gets better. Aid groups are afraid of another massive wave of people coming out when the final neighborhoods of the city are assaulted. As soon as the fighting is over however, there is likely going to be a large flow of people back into Mosul. There they will face a whole host of new problems such as finding jobs, rebuilding, and acquiring services.

Operation Inherent Resolve, “Executive Summary of the Investigation of the Alleged Civilian Casualty Incident in the al Jadidah District, Mosul,” 5/25/17