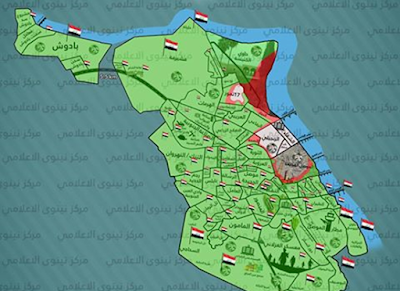 The Iraqi Security Forces (ISF) are taking the last neighborhoods of west Mosul. On May 20, Tamuz 17 was declared fully cleared by the Federal Police. The ISF said it freed the neighborhood twice before. Similarly Iqtisadin was liberated for the third time. Rabia was a new area taken from the insurgents as well. The next day there was continued fighting in Najar and Bab al-Sinjar was attacked by the Golden Division. The security forces and Ninewa officials agree there are only a few parts of west Mosul left under Islamic State control, but they disagree about which ones. The Golden Division and Federal Police told the press only four areas were left. They named the Old City, Shifa, and Siha, but had different neighborhoods for the fourth either Bab al-Sinjar or Zinjali. A member of the Ninewa security committee had the figure at 7 neighborhoods, but didn’t name them. Whatever the exact number is there are only a few left, and the battle for the city is near its end.


On May 20, the Golden Division announced that its operations were finished in the Mosul campaign. It has been in the lead since the start of the battle in October 2016. The next day the unit was still fighting in two neighborhoods however. A spokesman stated that after Najar was taken it would be finished. It would be very surprising if the division didn’t attack the Old City, which will be the last and probably one of the hardest neighborhoods to take. The Golden Division is by far the most capable of all the forces taking part in the campaign, and has honed its skills in urban warfare over the years. One of the reasons why the Old City has not been taken yet is the fact that the Federal Police were given much of the task and had the least experience in fighting in cities.

The Hashd were still moving into western Mosul, and raising more criticisms as well. According Badr’s Hadi Amiri the Hashd took 6 villages in the Qayrawan district. Their presence in the Sinjar area has been harshly attacked by the Kurds. A parliamentarian on the security committee told the Hashd that they would not be allowed to move further, and that the Peshmerga would take the remaining Yazidi towns from the insurgents. A Peshmerga commander demanded that the Hashd withdraw as well. This was in response to a Hashd commander saying that it would continue to move westward, and that Sinjar was part of Iraq and trying to “occupy” it was a “red line.” The Kurdistan Democratic Party (KDP) controlled Sinjar before 2014, but abandoned it when the Islamic State approached, which led to the massacre of the local Yazidi residents. The Kurdistan Workers’ Party (PKK) moved in from Syria and saved many of the locals, and have remained there since. Many Yazidis resent the treatment by the KDP and now want to forge their own independent security forces and political parties. Needless to say, the KDP is greatly frustrates, and would like to re-assert its authority over the district. The arrival of the Hashd only causes more problems as they are claiming they will free the remaining Yazidi villages, and are trying to assert the central government’s control. The rhetoric on both sides has been heating up as a result, and there could be a military confrontation if things continue along this course.

The Iraq President was at a World Economic Forum and called on investors to help rebuild Mosul. He said that battle for the city was almost complete, and that a lot of work and money would be needed for reconstruction afterward. Iraq is running a large budget deficit since world oil prices declined and doesn’t have the funds to rebuild Mosul let alone Ninewa. It is hoping that the U.S. and U.N. will take up most of the bill, but that’s unlikely to happen as well. Appealing to investors is a third avenue it has to follow if this task is to be completed.

Qatar joined Kuwait as two of the few regional countries providing aid to Ninewa. Qatar Charity was funding a displaced (IDP) camp in Ninewa. It also distributed 21,000 food packages to 7 IDP camps. The Kuwait Relief Society handed out food to towns in Sulaymaniya where IDPs from Ninewa had settled. Iraq’s Prime Minister Haidar Abadi called on the region to help rebuild the country after the Islamic State was defeated. Much of the Middle East talks about supporting Iraq’s Sunnis, and the premier was calling on them to put their money where their mouth was. Few responded. An exception was Kuwait that has been quietly supporting aid efforts inside and out of Mosul. Qatar now appears to be joining. Much more is needed, and it will be interesting to see if any provide funds for rebuilding, which will be the major challenge in coming days after Mosul is taken.

AIN, “The popular crowd frees five villages to the north and south of Qayrawan,” 5/21/17

Al Maalomah, “Nineveh: Only seven small neighborhoods are to be liberated in West Mosul,” 5/21/17

Rockett, Karen, “Battle for Mosul could be over and see ISIS kicked out in ‘next few days,’” Mirror 5/20/17

Shafaaq News, "Federal Police announces the clearing of two neighborhoods and the restoration of 80 areas in the right bank of Mosul," 5/20/17
- “Rabia freed in Mosul,” 5/20/17

Al Sumaria, “The Counter-Terrorism Command announces the completion of its operations in the center of West Mosul,” 5/20/17
- "Ninewa Operations announces liberation of Al-Rabie neighborhood in West Mosul," 5/20/17

Protester holding picture of Dr Rikabi the head of the Imtidad Movement (AFP) The Imtidad party which came out of Iraq’s protest movement is...