Review Battle For The City Of The Dead, In The Shadow of the Golden Dome, Najaf, August 2004

Review Camp, Dick, Battle For The City Of The Dead, In The Shadow of the Golden Dome, Najaf, August 2004, Minneapolis: Zenith Press, 2011 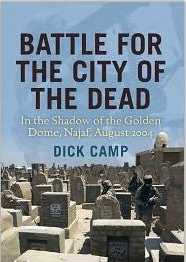 To the Americans, Moqtada al-Sadr was nothing but trouble. He mixed Islam and Iraqi nationalism to oppose the U.S. occupation. His followers murdered Sheikh Abdul Majid al-Khoei a pro-western Iraqi exile from a renowned religious family in Najaf in 2003 who Sadr considered a rival. His militia the Mahdi Army rose up twice in that same city in 2004. The Americans at first dismissed Sadr, and then finally decided that he was a threat. How the U.S. dealt with the two uprisings in Najaf are the subject of Dick Camp’s Battle For The City Of The Dead, In The Shadow of the Golden Dome, Najaf, August 2004. He provides a great account from the ground level on how the U.S. forces fought Sadr’s militia.


Moqtada al-Sadr launched two revolts in Najaf in 2004 prompted by the Coalition Provisional Authority (CPA) cracking down on his movement. In March 2004, the CPA closed one of Sadr’s papers for its anti-Coalition stance, which led to immediate protests by Sadr’s followers. The U.S. then ordered the arrest of one of Sadr’s aides for the death of Abdul Majid al-Khoei. That led the Mahdi Army to come out into the streets in the first Battle of Najaf in May 2004, which only lasted about a week, quickly followed by the second revolt in August that went on for almost the entire month. Camp spends a short part of his book on this as it is background,  but it’s important to note that the U.S. consistently underestimated and mishandled Sadr. The CPA failed to take Sadr seriously and tried to ignore and exclude him. When he refused to go away and organized his militia, the Americans then resorted to force, which succeeded tactically, but not strategically. Camp hints at that in his conclusion when he writes that Sadr remained a leading political figure with an armed faction long after the 2004 revolts, and is part of the Iraqi government. Since Camp wrote a military history focusing upon the American troops he doesn’t give enough emphasis to the political side of Sadr and what the events in Najaf meant. Sadr was able to escape both battles and gained a seat at the table with Iraq’s elite afterward.

What Battle For The City Of The Dead does a much better job doing is describing how intense the fighting in Najaf was for the U.S. forces. Despite the Americans having overwhelming firepower they met a determined foe. The Mahdi Army was divided into two cohorts. The first were the common militiamen who were largely untrained and undisciplined. They usually attacked targets of opportunity using hit and run tactics. They could also be fearless and go after U.S. armor with nothing but AKs and rocket propelled grenades. The others were the trained Mahdi Army who tended to stay around the Najaf and Kufa mosques. Half of those cadres defended those sites, while the others carried out offensive operations. They deployed snipers and mortar teams, and were capable of small unit, combined arms operations. For example in one instance, the militia laid down a mortar barrage while other fighters attempted to infiltrate into the U.S. lines. They suffered heavy losses, and were able to constantly be reinforced with men coming from Baghdad. Since the book is from an American perspective it can only give that side’s view of the Mahdi Army. That was a grudging respect. Even though most of the militia men the U.S. encountered were the untrained ones, their tenacity was impressive especially in the face of the heavy casualties they suffered. Their ability to adapt as the battle progressed also showed that they had some good leadership and IQ.

Originally the 11th Marine Expeditionary Unit (MEU) did the bulk of the fighting, but reinforcements had to be called up from other parts of Iraq that included the U.S. Army as the battle raged on. Combat was every day and could last up to 9 hours. Camp interviewed dozens of marines and soldiers to get their personal recollections of the fighting. In the initial combat in the Najaf cemetery for instance, the two sides were so close the marines could hear the Sadrists talking, and smell their body odor and food. The temperatures were over 110 degrees, and wearing full combat gear meant heat exhaustion was a constant threat. As this was a set battle the U.S. was able to deploy almost all of its firepower from heavy machine guns to mortars to tanks to helicopters and aircraft. There were exclusion zones however such as around the Najaf mosque that the U.S. could not fire upon because of their cultural and political significance, which greatly frustrated the Americans because the Mahdi Army quickly figured out where they were and mobilized there out of harm’s way. Camp emphasizes the esprit de corps of the Americans. They had good commanders, the coordination between the Marines and Army was seamless, and the troops fought hard every day in extreme conditions.

The actual fighting was divided into two phases. The first was when the 11th MEU moved into the Wadi al-Salam Cemetery in the northwest of the city. The burial ground was huge and full of large, multi-level mausoleums, which the Sadrists used to store weapons and as strong points to hold up the Americans. The Marines spent hours just trying to suppress the militia gunmen, and then moved into the graveyard itself. The fighting there was up close and personal, and progress was slow. Eventually the U.S. decided the cemetery was too vast, and set up a skirmish line and would rotate its men in and out.

The second phase started when the reinforcements arrived. They began with raids into Najaf city and Kufa next door. Eventually the Americans focused upon the Najaf mosque. Because of its political sensitivity the U.S. couldn’t enter it, and were going to have Iraqi forces take it. The problem was it was surrounded by militiamen, so the nearby area needed to be cleared first. That led to heavy urban fighting. The Iraqi government eventually opened ceasefire talks with Sadr as the battle dragged on, which would lead to stop and starts in the combat. Eventually, the U.S. forces launched their final assault. They were only a few meters away from the mosque when Ayatollah Ali al-Sistani brokered a peace deal with Sadr and the battle ended. The Sadrists proved adept at sniper and mortar fire, and learned by practice improving their tactics as the battle progressed. They were completely outgunned however. The Americans would increasingly turn to their heavy firepower to take out militiamen rather than take part in extended gun battles. Despite the disparities the Sadrists never gave up. This makes up the heart of the book, and provides a great perspective on how the American forces saw things.

There are only a few shortcomings in Battle For The City Of The Dead. As already stated, there should have been more on the political context. There could have been more maps as well. There are several, but they are all in the second part of the book and based upon ones provided by the U.S. military. There are none in the first half on the fighting in the Najaf cemetery. There’s also a lull in the middle as the reinforcements arrive. Camp spends several pages describing how the U.S. forces got organized, and then their drive to Najaf, which could have been edited out. Otherwise the book does a great job describing the fighting in 2004. The interviews are extensive and give a good first hand accounts of the combat. They explain how intense and ferocious things were. Overall, this is a thorough U.S. military history of one important battle in Iraq.