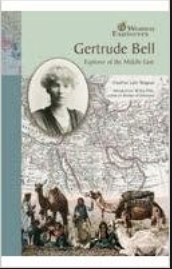 Gertrude Bell was an extraordinary woman. She grew up the daughter of a rich industrialist family from northern England. She went to Oxford when few women attended, and then travelled the world falling in love with the Middle East. That led her to a series of books on the region that got the attention of the British government when World War I broke out. She became a leading official, and the only woman in her position, eventually becoming an adviser to King Faisal I the new monarch of the recently created country of Iraq. Gertrude Bell, Explorer of the Middle East is a good introductory source on the life and times of Bell actually aimed at teenagers, but just as good for an adult looking for a short review of this famed woman.


The book starts off with the story of Bell’s visit to Arabia in December 1913. She’d wanted to go there for quite some time, but it was too dangerous due to fighting between Ibn Saud and Ibn Rashid for control of the peninsula. She finally, went only to be attacked by bandits, and then held prisoner by the Rashids for several days afterwards as fighting broke out once again with the Sauds. This was an extreme example of Bell’s travels throughout the Middle East, but it highlighted what allowed her to make such trips. She was on her own in a foreign environment, and yet had the wits to get out of situations, and to adapt. She also had a sense of adventure that did not deter her from difficult situations.

After college she made her first trip east going through the Ottoman empire and Persia, and would return there again and again. She would travel as the only woman, hiring a guide and some servants. The sight of a British woman, on a horse, with no veil was quite something to be seen by the locals, and she quickly made a name for herself. She began writing about her journeys, and became an archeologist both of which would lead to a series of books, which became well known in Europe. It was that work which drew the attention of the English government when World War I broke out.

What led Bell to these journeys was her family’s wealth, but just as important was her being unsatisfied with her situation in England. Bell’s family were rich industrialists and without that money she could have never gone anywhere. That’s been touched on by plenty of other sources on Bell. Explorer of the Middle East highlights that she was also unhappy and restless. She was constantly unlucky in love falling for a series of men that either died or were already married. She wasn’t happy with the regular woman’s lot of the time of attending parties to try to find a husband. She was also highly educated, which made her interested in the world, and again, not willing to accept a traditional role for a female.

Bell would continue her groundbreaking tradition when she went to work for the British government. In 1915 she was contacted by a friend in British intelligence to come to Cairo and help with the war effort. There she met and worked with T.E. Lawrence. Those two argued for backing an Arab revolt against the Ottomans, which was opposed by the India office that had control of the Middle East. Bell went to India to lobby the Viceroy Lord Hardinge who she had met during one of her travels. That was successful and Feisal, the son of the Sharif of Mecca was chosen to lead the uprising. Bell then went to Basra and then Baghdad, eventually becoming the aide to the British High Commissioner for what would become Iraq. Initially she advocated for colonial rule, but then shifted to backing Faisal as king. When Faisal was agreed upon she played a leading role in advising and building support for him. She would also be the only English woman in attendance at such high level meetings as the 1919 peace conference in Paris and the 1921 Cairo conference that determined the fate of the British holdings in the Middle East. Later in life her star began fading as Faisal and the High Commissioner moved on to their own affairs and relied upon Bell less and less. That restlessness was still in her and she was contemplating making another move, but ended up staying and dying in Iraq. Author Heather Wagner again does a good job to note the discrimination that Bell constantly faced. Not only was she the only woman in an office full of soldiers and Foreign Office types, but her ideas often estranged her from her colleagues as well. She was not deterred and carved out a name for herself not only in the British government, but in Arab society as well.

If one wants a very short yet thorough review of Gertrude Bell this would be a good start. It not only goes through the details of her entire life, but highlights her motivation to be such an iconoclast and the difficulties she faced as a woman as a result. It’s really amazing to read the things she did and was able to accomplish. She was basically undeterred to achieve what she wanted, which is the main message of the book.