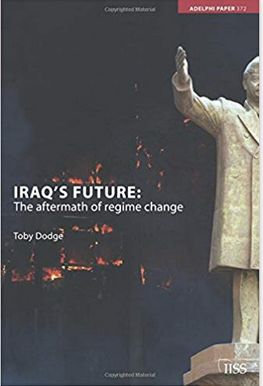 What were once pressing issues in Iraq are quickly becoming history. Iraq’s Future: The aftermath of regime change was a short (70 odd pages) review of the situation in Iraq as it stood at the end of 2005 by London School of Economics and Political Science’s Professor Toby Dodge. It quickly reviews the U.S. invasion, and then goes through the major issues that were facing the country at that time. If one wanted a quick synopsis of the situation with some good analysis this would be a good starting point.


Iraq’s Future started with why the United States invaded Iraq in 2003. After September 11, the Bush administration began putting together a different array of threats from Al Qaeda to weapons of mass destruction to rogue states and presented them all as the new war on terror. The White House argued that the Middle East was the center of all these threats so something had to be done, and that would be accomplished through the removal of Saddam Hussein. President Bush also talked about transforming the entire Middle East in the process. the fact that nation building has a very mixed to poor record in other parts of the world didn’t seem to deter the Bush administration. What in fact happened was the Americans became overwhelmed by the task because it didn’t adequately plan for the challenges, and undermined its entire policy causing more trouble than solutions.

Dodge then runs through the myriad of problems Iraq was facing after the invasion. That included the failure of the United States to establish law and order, the quick expansion of the insurgency, the rise of political parties backed by militias, the trouble creating new Iraqi Security Forces, the demands of Iraqis to control their own future, and the rise of sectarianism. Dodge not only does a run down of each one of those issues, but provides some best practices such as going through other attempts at nation building in places like Cambodia, Haiti, Somalia, and Bosnia and what lessons they could provide in Iraq. There is also some concise analysis. For instance, Dodge warned that many westerners were seeing Iraq only in terms of sect as if this was an ancient and unchanging divide between Sunnis and Shiites, when in fact it was only a specific historical period in the country that didn’t exist before, and could change in the future. Dodge also predicted that the new political class, mostly made up of Iraqi exiles and opposition parties would create a new system based upon patronage that would marginalize the public and buy off their votes by dishing out state resources.

Iraq’s Future is a quick overview of the post-invasion situation in the country. It could be used as a starting point for further research as it mentions many of the major dilemmas the country was facing along with some good insights.