Survey Finds A Divided Iraq, But Not For The Traditional Reasons


The National Democratic Institute released a new survey that found Iraqis feeling deeply divided. There were only three questions asked of why people felt that way. It appeared that sect was no longer such a big issue, but rather the distribution of goods and services that piqued the public.

Two-thirds of Iraqis felt that their country was divided. 68% responded that way versus 29% that said the country was unified. In Baghdad, the south and west around 60% said Iraq was divided. That shot up to 95% in Kurdistan. That was due to the fallout of the independence referendum. After that vote, Prime Minister Haidar Abadi ordered federal forces to seize Kirkuk and the disputed territories, which caused widespread resentment amongst Kurds as shown in the poll.

Traditionally, sectarian relations were a major source of stratification in Iraq, but the poll found that to not be so true anymore. When asked if Sunni-Shiite relations were getting better or worse, 83% in Baghdad, 66% in the south, and 85% of the west replied with the former. Only in Kurdistan did 74% believe things were worse. Similarly, when questioned about sectarianism, 78% in Baghdad, 52% in the south, and 64% in the west said it was getting better. Again, 80% in Kurdistan said it was worse. The negative responses in Kurdistan were once more a reflection of the fall out of the independence referendum. 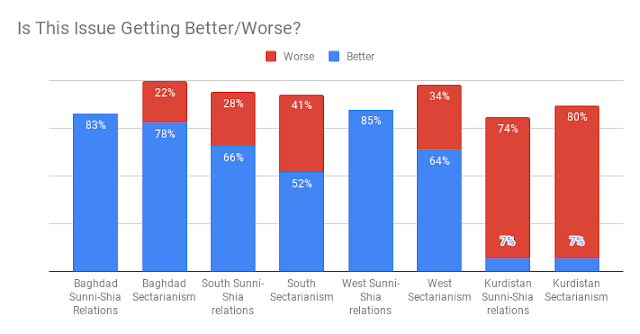 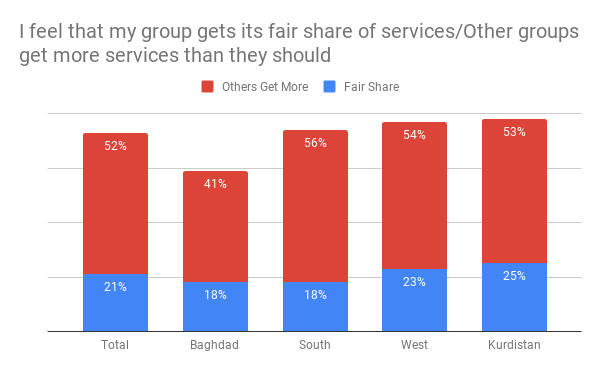 The one issue people felt divided over was the provision of services. 52% said other groups were getting more than they should versus 21% that said their group was getting their fair share. There was little variation on this issue across the regions with only 18% in Baghdad, 18% in the south, 23% in the west and 25% in Kurdistan feeling like they were getting adequate services. Issues such as electricity shortages have led to annual protests in Baghdad and the south for the last several years. In 2018, there was a water shortage as well leading more people out into the streets. This has also been a concern in Kurdistan in recent years.

The problem with the survey was that it only asked a few questions about why Iraqis felt like their country was divided. There might have been other issues at play, but that's unknown because they weren’t questioned about them. It is good to see that sect is playing less of a role. Only in Kurdistan where many people were still feeling angry about the independence referendum, was there still widescale resentment over religion. Services were seen as much more important with a general feeling that other groups were taking more than they should. That anger exploded in the summer of 2018 in Basra with riots, burning of buildings, etc. As sectarianism recedes it was inevitable that things like electricity and water would come to the fore as Iraq has suffered shortages of both since 2003. The problem for Iraq is due to poor planning and corruption, these things are not going to be solved anytime soon, which will mean more demonstrations in the coming years.