Review Blood, Oil and the Axis: The Allied Resistance Against A Fascist State In Iraq and the Levant, 1941

Broich, John, Blood, Oil and the Axis: The Allied Resistance Against A Fascist State In Iraq and the Levant, 1941, New York: Abrams Press, 2019 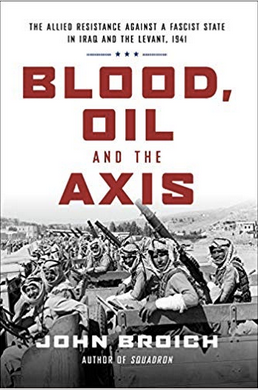 In 1941 the British were facing one crisis after another. The Germans sent the Afrika Korps to North Africa, and then Yugoslavia and Greece fell to the Nazis. Into this mix came the March 1941 coup in Iraq where a group of Arab nationalist officers seized power, causing the pro-English monarchy to flee, and the new Iraqi government to reach out to the Axis. That led to the Anglo-Iraq War and then the invasion of Syria as Prime Minister Winston Churchill believed that Germany and Italy were making a play for the Middle East’s oil and to cut the Suez Canal. This is the topic of John Broich’s Blood, Oil and the Axis: The Allied Resistance Against A Fascist State In Iraq and the Levant, 1941. The author deals with not only the political background to this conflict and the military history, but also includes personal experiences from the Allied, Axis and Vichy French sides. This book gives a thorough account of Iraq in World War II, and one of the best coverages of the fighting in Syria.


Broich starts off with what factors led Iraq to go to war. Since the 1930s Iraq had suffered from a series of military coups. There were many officers that believed the military was the way to create national unity in a country made up of so many diverse groups by making them serve together. This was inspired by the experience of the Prussians and Germans. England had also created Iraq after World War I and continued to dominate the country since then causing widespread resentment amongst the population. Some believed that the Axis was the way to reduce Britain’s role. That all led to the 1941 coup by the Golden Square officers who installed Rashid Ali al-Gaylani as premier. They were willing to work with the Axis in return for Arab independence from the British and French colonialists that had mandates in Syria, Lebanon, and Palestine. Prime Minister Winston Churchill immediately believed this was a dangerous threat to England’s entire position in the Middle East. If the Axis gained access to Iraq it would get its oil and threaten neighboring Iran’s reserves. It could also move west into Palestine, Jordan and most importantly Egypt and the Suez Canal while the Afrika Korps was pushing from Libya. The book does a very good job breaking down the internal situation in Iraq before the war. There have been some authors that have called the Golden Square officers and Gaylani pro-fascist. While they were definitely inspired by some of Germany’s history and thought that the Axis would win the war after all their victories, Broich points out that their pan-Arab ideas about freeing and then uniting the Arab lands was more paramount to them. Ironically he wrote “A fascist state in Iraq” in his sub-title.

The following chapters deal with the Anglo-Iraq War and invasion of Syria. It has a mix of military history covering the units, their commanders, movements and major battles, but also includes the accounts of several people mostly from the Allied side that were involved in the conflicts. For example, Lieutenant John Masters of the 4th Gurkha Rifle Battalion was based on the Afghan frontier and was on vacation in the United States when he found out that he was going to war. His unit was sent with Indian Army units to Basra in April 1941. Anthony Dudgeon was a Royal Air Force (RAF) squadron commander who was on leave at the Habbaniya Air Base in present day Anbar province when the Anglo-Iraq War started and 7,000 Iraqi troops attacked the base. A Vichy French general in charge of Syria and a German diplomat sent to that mandate are also included. Broich’s emphasis is upon the British response to Iraq and Syria’s actions that started the war, which was probably why he favored the Allied soldiers. It also might have been easier to find those sources. By including these stories, the book brings more depth to the traditional military study.

Finally, Blood, Oil and the Axis provides a sharp contrast between the two conflicts. Both times the British were outnumbered, and yet the fighting was completely different. The Iraqis had an overwhelming force and the high ground above the English Habbaniya base along with the backing of a few German and Italian fighters and bombers, and yet never launched an attack settling for shelling the base instead. Then suddenly the Iraqis fled after they heard rumors of a huge relief force approaching. Later, the Iraqis put up a strong fight for Fallujah, and blocked two thrusts towards Baghdad, but overall their resistance was lack luster at best and showed little aggression. Vichy controlled Syria had opened its air fields and ports to the Axis and thus led to the British to invade. The battle for Syria was completely different. First, the British and their allies took traditional invasion routes from Palestine and Transjordan that were easily defended by the Vichy French. That forced a re-think of the strategy and a new three pronged attack from Iraq into eastern Syria. The Vichy forces fought hard across the country and its air force was especially effective in bombing the Allies. The problem was France couldn’t effectively re-enforce and supply its army, which eventually led to its defeat. In contrast to the Anglo-Iraq War where casualties were relatively light there were over 4,000 deaths on both sides and more wounded in Syria. Again, the author highlights many of these battles with the firsthand accounts of several actors from foot soldiers, to interpreters to officers, and even a British propagandist. There are very, very few accounts of the Syrian war, and this one was very interesting and thorough.

John Broich succeeded in enlightening a segment of World War II that is not well covered, let alone known. He took the time to describe the politics going on in Iraq when one could have just stuck with the Axis and Allies. The inclusion of personal recollections of the wars was also a nice touch. Today Iraq and Syria are considered side shows to the wider conflict that ensnared the world, but at the time the British thought it was an existential threat to its last position against the Axis. Blood, Oil, and the Axis is the perfect starting point to understand this part of the fight against Germany and Italy.


In my WW2 reading I found a reference to Vichy France sending reinforcements to Syria after May 1940, thereby boosting the garrison. Somehow the Royal Navy did not intercept them, perhaps politics interfered?

I think you mean May 1941. The British didn't do anything about Vichy France in the region until the invasion of Syria that started in June 1941. The Middle East commander Gen. Wavell didn't even want to go to war with Iraq because he was so stressed out about North Africa and Greece and the lack of resources in Egypt. If it hadn't been for India Command jumping in the Anglo-Iraq War might not have even happened.