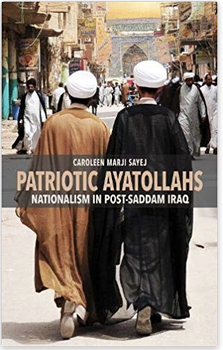 Caroleen Marji Sayej set out to document the role of the leading Ayatollahs from Najaf. She argued that they played a pivotal role in post-Saddam Iraq. They were not quietist as many believed staying out of politics, but saw themselves s guides for the new Iraq. That didn’t mean they wanted an Iranian style Islamic state where clerics would run the government. Instead they pushed for a democratic Iraq. At the same time, they were challenged by others such as Moqtada al-Sadr who claimed equal standing with the ayatollahs even though he did not have their religious education. There were two major problems with the author’s thesis. The first was that she believed they wanted a non-sectarian Iraq, when they supported a Shiite majority victory in the 2005 elections. The second issue was that she took statements and fatwas from the clerics at face value and didn’t do the research into the overall situation leading to many very questionable assertions.


Sayej’s main point was that the Iraqi clerics led by Grand Ayatollah Ali al-Sistani had an inclusive vision of the country and advocated for a nonsectarian future. She returns to this over and over throughout the book. She quotas various statements by Sistani and others that they did not privilege the Shiites over other groups in the country, they wanted all Iraqis to vote, they did not blame Sunnis for terrorism, etc. One of her examples was the 2005 elections where people voted for a temporary parliament to write a new constitution, and then a permanent government at the end of the year. The United Iraqi Alliance (UIA) was created of the leading Shiite parties. Sayej claimed that Ayatollah Sistani never supported the list. That’s contradicted by Ali Allawi who was a minister in the early Iraqi administrations who wrote in The Occupation of Iraq that Sistani was not only instrumental in putting together the UIA, but one of his representatives was at all of the early meetings. The ayatollah wanted to make sure that the Shiite majority gained control of the government, and even rejected a proposal to create a grand multi-ethnosectarian list of Shiites, Sunnis and Kurds. What’s ironic is that she has Allawi in her bibliography which means she either didn’t read it thoroughly or dismissed it because it would disrupt her entire thesis.

This pointed to another major failure of the book, which was quoting the clerics without researching whether they followed through with their words. For example, in 2007 she wrote that Moqtada al-Sadr started to change his stance and moved towards the Najaf establishment by calling for Sunni and Shiite unity. This was during the civil war when Sadr’s Mahdi Army was cleansing Baghdad of Sunnis. Nothing he said about a non-sectarian Iraq would be believed at that time. In another instance she wrote that Sadr withdrew his support for a no confidence vote against Prime Minister Nouri al-Maliki because he wanted to align with the ayatollahs and rejected Iranian influence, when it was Tehran that actually made him change his mind on the issue. Finally, in 2014 Ayatollah Sistani issued a fatwa calling for people to defend their country from the threat of the Islamic State of Iraq and al-Sham (ISIS). She said that was an appeal to Iraqi nationalism, and was also part of Najaf’s rivalry with Iran because Ayatollah Sistani was concerned about pro-Tehran militias being used by Prime Minister Maliki against ISIS. Nothing is said about the fact that those same militias became the leaders of what became the Hashd al-Shaabi or the Popular Mobilization Units that were the result of Sistani’s fatwa. Iraqi politics did not appear to be a strong point of Sayej, which led to theses constant problems. While she spent a lot of time reviewing the work of the clerics, she didn’t do as much looking at the larger context to see if they meant what they said.

Other elements of the book are far better such as dispelling the image of Najaf as being from the quietist school or advocating for an Islamic state. The conventional wisdom was that Sistani and the other ayatollahs were quietists rejecting a role in politics and only speaking on religious issues. There was another view commonly expressed in the United States that feared that the clerics wanted an Islamic state and/or the Iranian political system. During the rule of Saddam Hussein Sistani and the other religious scholars in Iraq stayed out of politics leading to the view that they were following the example of the last Grand Ayatollah Abu al-Qasim al-Khoei who was a quietist. Sayej convincingly argues that Najaf was silent because they feared the consequences of speaking out about the dictatorship. Once Saddam was gone they were concerned about the direction of the country and made strategic decisions to provide guidance to the new class of politicians at crucial times to try to guide them. One of the most important and successful efforts was advocating for elections and democracy to create a new Iraqi government and write a constitution in opposition to the American plans to control the process without much Iraqi popular input. Ayatollah Sistani won this contest of wills, leading to three votes in 2005, his greatest victory. Another time in 2014, Sistani came out against a third term for Prime Minister Maliki due to his sectarian politics and the rise of ISIS, which led to the selection of Premier Haidar al-Abadi. At other times the clergy couldn’t sway events such as when they called for an end to the sectarian violence or when they constantly chided the government to end corruption. On the other hand, the leading ayatollahs did not believe that they should have a direct role in the government like the Iranian model. Sistani constantly rejected Ayatollah Khomeini’s views. Najaf also successfully fended off Tehran’s attempts to win over students and support in the city and pick a successor to Sistani. The U.S. at first believed that the clerics could be ignored because they didn’t believe in being involved in politics. Then when Ayatollah Sistani began making demands, it feared that he would advocate for Islamic rule. Neither of those proved true, but that is still misunderstood by some in America.

Lastly, Patriotic Ayatollahs went over the challenge that the religious establishment faced from lay groups. The biggest rival came from Moqtada al-Sadr. He demanded the same standing as the ayatollahs even though he was a minor cleric. He created a militia and a political party along with providing services to people to try to control the streets and Baghdad. In May 2003 for instance, Sadr issued a fatwa saying that looting was okay as long as people donated 1/5 of the value to local Sadr offices when he was not a religious scholar that could issue such orders. Sayej compared this threat to what the Catholic Church faced with the Reformation when people like Martin Luther asserted their authority. The ayatollahs had to prove their relevance and adapt and they did. That was shown by the fact that Sadr eventually ended his feud with Najaf and tried to align with it in general terms, and that Sistani still holds the greatest influence in the country.

While Caroleen Marji Sayej made some interesting observations about how the Najaf clergy is perceived, the fact that her main thesis that it was nonsectarian was untrue really undermined the book. That was because of her tendency to accept clerical statements and fatwas without background understanding. It was her lack of knowledge about Iraqi politics that really led to the book’s undoing.

Link to all of Musings On Iraq's book reviews