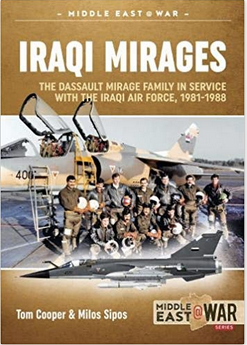 Iraqi Mirages, The Dassault Mirage Family In Service With The Iraqi Air Force, 1981-1988 covers the development of the Iraqi Air Force that led to its purchase of the Mirage fighter from France, which became its most advanced aircraft during the Iran-Iraq War. It places those planes within the larger operational plans during that conflict. The major argument was that the Air Force faced a number of problems from the top down, and it was only at the very end of the war that Iraq overcame these difficulties and effectively used the Mirages.


Authors Tom Cooper and Milos Sipos started with some interesting history of the Iraqi Air Force. That started with a growing frustration with its poor performance in the Arab-Israeli Wars and the inability to put down various Kurdish revolts. In the 1970s the Soviets refused to re-supply the Air Force during the latest Kurdish uprising and was forcing planes upon it that it didn’t order. The Iraqis felt insulted and that gave them the incentive to go to Paris and work out a deal in 1977 to buy Mirage jets. From 1981-1988 France delivered 86 Mirage fighters and another 15 trainers. This would prove very important because the Soviet planes they had were vastly inferior to the Iranian F-4 Phantoms and F-14 Tomcats they would eventually fight. The Mirages started a technological revolution within the Air Force as they had the latest electronic counter measures, anti-radar equipment, and missiles. Additionally, France provided advisers that actually planned some of the more adventurous operations. The Iraqis would have been inferior to the Iranians throughout the war without the French.

The book emphasizes that it took almost until the end of the war for the Iraqis to fully utilize these new weapons. One major problem was the inexperience of the Iraqi pilots. They were deathly afraid of the Iranian F-4s and F-14s. Their American radar and missile systems were superior to the MiGs and Sukhois most of the Iraqis flew and even the initial Mirages until they were outfitted with new counter measures. That led the Iraqi pilots to flee every time they detected the Iranians. In those rare times they tried to attack the U.S. made jets the Iraqis fired their missiles at maximum range and then retreated not even seeing if they hit anything or not. Second, Saddam mismanaged the war. Early on after Iraq lost the initiative Saddam ordered that no operation be launched that might result in the loss of Iraqi planes. He and the Iraqi command didn’t understand the use of air power to begin with. In 1985 for instance, Iran launched an operation to try to seize the city of Basra. Saddam ordered the Air Force to attack Iranian cities instead of the Iranian troops. The Air Force constantly shifted its targets from Iranian oil terminals to shipping to ground support to urban areas. Thus, after many tries Iraq finally damaged Kharg Island Iran’s main oil terminal in 1986, but then the Air Force was tasked with hitting another oil terminal allowing Tehran to repair Kharg. Saddam also began giving out medals and money to Iraqi pilots regardless of their performance, which made them reluctant to speak up about the problems with the war. Third, Iraq lacked effective targeting and intelligence to effectively use its planes. During its campaign to attack shipping in the Persian Gulf the Iraqis would simply fire upon the first thing that came up on their radar. That led ironically to the first two ships being hit containing Kuwaiti oil that was helping Baghdad pay for the war. They also didn’t know what the Exocet missiles they bought from France could do to large tankers and didn’t have the intelligence to check its results. That led to Iraq to claim a huge number of ships being sunk that was a complete exaggeration. Baghdad was also unaware of the ship convoys Iran was running in the northern Persian Gulf that delivered men and material, which was the key to all of the major military operations of the war. It wasn’t until 1988 the last year of the war that the Iraqis were able to strike a strategic victory when it bombed a number of refineries that led to fuel shortages and trapped the majority of the Iranian Revolutionary Guard units in the north for the rest of the war. Not until the end of the conflict did Iraq mass its planes for major attacks upon the Iranian ground forces often times using chemical weapons. This was the highlight of the book. It meticulously went through all the major operations and the Iraqi strategy or lack thereof. It placed the Mirages within this larger picture to show whether they and the Air Force in general was effective or not. For most of the war they were not. It took years for the Iraqis to figure out how the French jets, which were the best of anything they had, should be utilized. Without this analysis there would have been no real way to determine whether the Mirages were productive or not.

The book is full of pictures, has some graphics to illustrate the tactics the Iraqis developed during the war, along with a few maps. The main drawback as with many military histories is the plethora of abbreviations. A reader can get loss in how many are used such as when Cooper and Milos describe an operation and all the equipment the Mirages were decked out in. Luckily, there’s a glossary at the start of the book.

The air war is one of the least well known parts of the Iran-Iraq conflict. This one volume provides a great overview. The Iraqi Air Force closely paralleled the developments on the land. First, there was initial confusion about how to fight the war. Then there was a long period trying to figure out how to overcome the Iranian advantages and the interference from Saddam. Finally, towards the end the Iraqis were able to launch successful offensive operations and led to a turning of the tide. The Mirages were integral to this eventual victory.