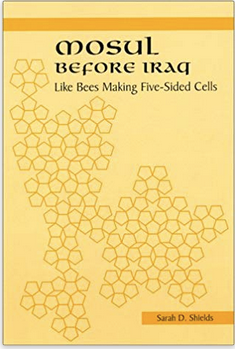 Professor Sarah Shields’ aim in Mosul Before Iraq, Like Bees Making Five-Sided Cells was to challenge traditional analysis of Ottoman provinces like Mosul that simply focused upon Europe’s either positive or negative effects. Before researchers would talk about how trade with Europe was supposed to help places like Mosul modernize. Then it switched to how Europe underdeveloped these areas and created a situation of dependency. Shields hoped to move away from both models and emphasize how a province like Mosul played a role in a regional economy within the Ottoman Empire as well as its connections with Europe. Her work goes through how different groups in the province like merchants, peasants, and tribes were connected to production, trade, and taxes in the last century of the empire. While there are some interesting points, after a while the book becomes rather monotonous.


Mosul Before Iraq begins with the Ottoman government at the turn of the century during a period when it was attempting reforms. The changes were based upon taxes and centralizing power. The governors for example were now to be appointed by Istanbul and answer to it rather than locals. Those officials also had to pay up front a portion of their expected taxes, so when they got into office they had to raise as much money as possible via fees and taxes to recoup their funds, which led to all kinds of problems. Shields convincingly argues that the late Ottoman reforms were supposed to make the empire more efficient. In fact, the policies weren’t evenly applied or enforced and caused just as many troubles as they were supposed to resolve. Making the governors’ top priority money put all kinds of strains on Mosul locals, and the taxes were always changing with each new administrator. This led to instability, complaints to Istanbul and even violence sometimes.

Another interesting observation of Shields is the role of European powers on the local Christian communities. Mosul had a mix of Nestorians, Jacobites and Armenians that had all broken away from the mainstream Christian church. The French, British and Americans all sent missionaries to try to convert these groups to their faiths. That led to the Chaldeans who were Nestorians who became Catholics. This created large divisions within the communities. The Nestorians for example split into two camps in the Kurdish mountains and a crisis of leadership with the patriarch of the community known as the Mar Shimon. That dragged in a local Kurdish chieftain Bedr Khan and fighting. The British demanded that the Ottomans do something to protect their Christian allies and troops were eventually sent in and Bedr Khan was deposed. Europeans and Americans were thrilled to find Christians in the middle of an Islamic empire. Rather than embracing and supporting them however, the westerners were instilled with missionary zeal and wanted to change them into Catholics and Protestants so that they would know the “real” faith. Breaking up Christian communities didn’t seem to bother them at all.

The majority of the book goes through how different groups were connected to the economy. That included craftsmen, merchants, traders, peasants, and tribes. Shields covered what economic activities they were involved in, their level of production, the taxes that were imposed upon them, and their role in trade. Shields’ argument was that Mosul was much more connected with the surrounding provinces like Baghdad, Basra and Aleppo within the Ottoman Empire than with Europe. There is a chapter on each group, and a lot of information is conveyed about each. The problem is that this is very dry reading. Going through how credit was procured or how much wool was produced and how courts were used by merchants to ensure that their contracts were enforced isn’t the most interesting material to the lay person. What actually catches the eye is the fact that most of Mosul’s economy was unchanged for over 100 years. There was no irrigation for farming. Products were moved through animal caravans rather than carts or railroads. Shipping up and down the Tigris was done by rather small goat skin boats that relied upon the tide. These means generally met the needs of the province and empire and actually expanded when European trade became more important, but the basics of how production and trade worked were static.

Mosul Before Iraq is basically aimed at academics and college students. For the general reader there is some information to be gained about the end of the Ottoman period in Mosul, but it is mostly for specialists.