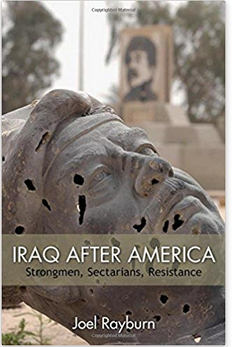 Iraq After America is one of the best books to help understand post-Saddam Iraqi politics. Retired Colonel Joel Rayburn broke up the country’s political groups into three categories: authoritarians, sectarians, and the resistance. He starts with Nouri al-Maliki as the authoritarian who used his position as prime minister to centralize power and divide, conquer and arrest his opponents. The sectarians were split between the Shiite supremacists who wanted to assure the Shiite majority dominated the state, Sunni chauvinists that rejected the new Iraq, and Kurdish maximalists that hoped to expand Kurdistan. Finally, there was the resistance that was made up of Iranian backed militias and Al Qaeda in Iraq. Rayburn was notable for not only coming up with a broad basis for evaluating Iraq, but he was also very prescient predicting many events that occurred after the book was published. His thesis was that all these groups increased the divisions in Iraq and might have caused irreparable damage.


It’s Rayburn’s belief that all three major groups complimented each other and helped divide Iraq. Prime Minister Nouri al-Maliki for instance used violence, patronage, the courts and his authority as commander and chief to undermine the other ruling parties, gain control of the security forces and the independent government commissions, to put down a series of protests over his misrule, and insure himself a second term. Next were the sectarians like the Shiite supremacists of the Supreme Council for the Islamic Revolution in Iraq that wanted to ensure Shiites controlled the state and Baghdad. They were matched by the Sunni rejectionists that included both political parties like the Iraqi Accordance Front and insurgents that refused to accept Shiite rule in Iraq and wanted to return Sunnis to power. Next were the Kurds who had dreams of annexing all the surrounding Kurdish areas and reversing the demographic changes carried out by Saddam Hussein. Last, was the resistance made up of both Sunni (the Islamic State of Iraq) and Shiites (Asaib Ahl Al-Haq and Kataib Hezbollah) that rejected the political system and relied upon violence. Each group only cared about its own goals and saw things in zero sum terms. They were perfectly willing to use both the power of the state as well as force. As Rayburn argued they took advantage of the cleavages in society and made them worse, while destroying the checks and balances that were supposed to limit power. They created a system where there were no limits on what the parties were willing to do to each other. It would have been interesting if the author took this analysis even further and went into how Iraq’s oil hinders the development of its democracy and allows these parties to act almost with impunity because they do not feel accountable to the public, but rather believe the people should answer to them because the ruling elite control the economy.

To show how on point Rayburn’s ideas were many things he mentioned in his conclusion foreshadowed what happened after Iraq After America was published. For instance, he noted in Iraqi history the central government always moves to curb Kurdish ambitions. That happened after they held an independence referendum in 2017 and Premier Haidar Abadi sent in the Iraqi forces to seize most of the disputed areas including Kirkuk. He warned that the Shiite resistance groups were a threat to the political class because they appealed to the poor and young and could last a generation. He said they would also play a role outside Iraq as part of Iran’s regional policy, and would be used by the government in the war against the insurgency. That all came true as the pro-Iran militias were used by Iran in Syria, and in 2014 they became the Hashd al-Shaabi to fight the Islamic State. They would eventually be made part of the security forces giving them the standing of the state and access to its wealth while not actually following the government posing an institutional challenge, as well as participating in the 2018 elections. These groups that once rejected politics have now become part of it for their own gain. Finally, he predicted that Maliki would move towards Iran because it would encourage his authoritarian bent. Today the former premier repeats Tehran’s propaganda and has allied with the pro-Iran groups in the country. His one failure was the belief that Maliki was so entrenched that he would never leave office. He couldn’t foresee that the prime minister’s own corruption would lead to the fall of Mosul and the subsequent loss of standing would force him from office. The next premier tried to be the anti-Maliki and the current prime minister is weak. That has eliminated the authoritarian from Iraq’s equation, but the other groups are still active. The Shiite parties still want to ensure their control. There are still Sunni rejectionists although fewer of them, while the Kurdish maximalists have been cowed for now through force of arms. The Shiite resisters are now part of the government and undermining it from within. While not everything worked out how Rayburn thought there were more things he got right than wrong.

Rayburn was attempting to explain how Iraqi politics would work out after the United States occupation ended. His three main groupings both explained what came before and how he thought they would play out afterward. He gave a very good overview of the main parties as well as the insurgents, and his analysis is still enlightening to this day. There are few books on today’s Iraqi politics. Iraq After America would be the best place to start if you want to understand them.