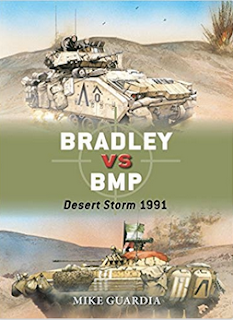 Bradley vs BMP, Desert Storm 1991 was the second in Osprey’s Duel series to deal with the Gulf War. This one focuses upon the armored fighting vehicles (AFV) of the American and Iraqi forces the Bradley and BMP respectively. Like all the Duel books this one follows the same format. First it breaks down the two vehicles, then the opposing forces, and then the combat. Author Mike Guardia’s main argument was that this was the first time modern American equipment was tested against its Soviet counterparts. It should have been that a developing country like Iraq with twenty year old vehicles was no match for a superpower with the latest technological innovations.


Guardia mentions the wide disparities between the two forces that faced off in the Gulf War. The BMP was a 1960s Soviet design that went into service in 1969. The Iraqis mostly purchased BMP-1s but also 200 BMP-2s for use in the Iran-Iraq War. The original 73mm gun of the BMP-1 could penetrate the armor of an American Bradley but was inaccurate past 500 meters while the 30mm cannon of the BMP-2 was ineffective against the US AFV. Not only that but because Iraq’s BMPs were ten years old and the Iraqis had poor maintenance the barrels were worn out leading them to miss even more. In comparison, the Bradley went into service in the 1980s. It had superior firepower, better optics and electronics like a GPS system. The Bradleys had thermal sights that allowed them to see through Iraq’s sandstorms, and begin firing at over 3,000 meters. The BMPs’ optics were only good to 900 meters. The two were not meant to fight each other but rather to allow the ground troops to keep pace with the tanks in a fast moving war of maneuver, but when the two did meet in 1991 there was no real comparison between the two. The Bradleys could see and fire upon the Iraqis before they even knew the Americans were there.

The book focuses upon the Battle of 73 Easting when the American 2nd Armored Cavalry Regiment (ACR) met the Iraqi Tawakalna ala Allah Division of the Republican Guard. This was part of the left hook the U.S. led Coalition launched from western Saudi Arabia to cut off the Iraqi forces in Kuwait before they could retreat back into Iraq. The 2nd ACR was the lead reconnaissance unit of the American divisions. On February 26, 1991 it ran into the lead elements of the Tawakalna division and engaged and destroyed them. As they continued to move forward they ran into prepared defensive positions and an Iraqi counterattack at night. The unit’s Bradleys played a supporting role to its Abrams tanks engaging the Iraqi vehicles and infantry with their missiles and guns. They mostly fired upon the Iraqis at over 3,000 meters before the Iraqis even saw them. They were able to destroy tens of both BMP-1s and T-72 tanks in a matter of minutes with the loss of only one Bradley. Guardia emphasizes that unlike in Kuwait where the Iraqis mostly fled rather than fight in this battle they resisted. The advantages in technology, training and organization were overwhelming for the Americans and the Iraqis basically stood no chance. The Bradleys and Abrams for example, coordinated their fire to take out individual targets, while there was no such cooperation by the Iraqis. Interestingly the author points out that despite the fact that the Tawakalna Division was quickly destroyed, it was able to hold up the American forces long enough to allow many of the other Republican Guard units to escape rather than be caught in the Coalition trap. That would prove crucial for Saddam Hussein in the postwar period.

The main issue with the book is that it tries to portray this conflict as proof of the superiority of American vehicles versus the Soviets’. The problems with this are many. First you have a 1960s BMP fighting against a 1980s Bradley. Second, there was no comparison between the U.S. Army which was a well oiled machine and the Iraqis who lacked training, supplies and servicing of their vehicles. A superpower versus a developing country is not comparable, so saying the then new Bradley outpaced the BMP that was a generation behind proves little. Not only that but the Tawakalana ala Allah Divisions’ resistance saved most of the Republican Guard that assured Saddam Hussein’s ability to stay in power. He used them to put down the uprisings that started right after the Gulf War. That meant while the Americans expelled Iraq from Kuwait, they failed at their larger strategic goals of wiping out Saddam’s best troops and hoping that he would be overthrown after his defeat. Guardia completely misses this because his focus is just on the two AFVs and the immediate situation of expelling Iraq from Kuwait. He therefore misinterprets the bigger picture on two levels when he compares the two vehicles as if they were equals and in his declaration of victory for the Americans. An added irony is that the Iraqis continue to use the BMP to this day, but had to buy new ones because most of their 1980s stock was scrapped after the 2003 invasion.