In April the Islamic State announced its latest annual spring-summer offensive Revenge of the Levant. Attacks spiked after a winter drop off. In June however, attacks went back down to roughly the same number as April.


There was a total of 99 Incidents in June. 6 of those were likely by pro-Iran groups however attempting to send a message of the United States during tensions between Washington and Tehran. That meant there were 93 by the Islamic State. That was a drop from the 135 recorded in May, and close to the 97 in April. Violence always goes up and down in Iraq, but the decline could be a sign that the militants are finding it difficult to maintain their momentum. That could be the result of a number of factors from heavier deployment of Iraqi forces to troubled areas, more targeted raids, to the lack of finances, etc. It will take more months to see what the overall trend is. 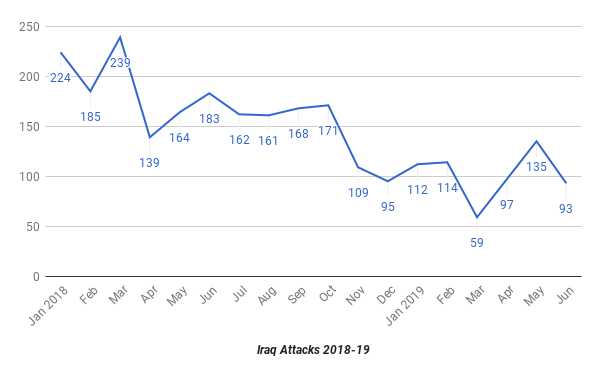 One major note is that two main sources on security in Iraq have been offline the entire month. That means that there were likely more attacks then recorded.

There were 74 deaths and 122 wounded during the month. 3 of the wounded were by rocket fire on a complex used by international oil companies in Basra and likely done by a pro-Iran group. In total, 5 Hashd al-Shaabi, 21 Iraqi Security Forces (ISF), and 48 civilians lost their lives, along with 21 Hashd, 39 ISF, and 62 civilians who were injured. Kirkuk with 58 casualties led the eight provinces reporting losses in July.

Violence in Anbar continues to fluctuate up and down. In January there were 16 incidents, going up to 27 in February, way down to 5 in March, up to 16 in April, back down to 7 in May, and then an increase to 13 in June. Almost all the incidents this month occurred in the first week of the month when there were 8 including five gun battles, and three suicide bombers killed. After that attacks puttered out to just 1-2 per week. 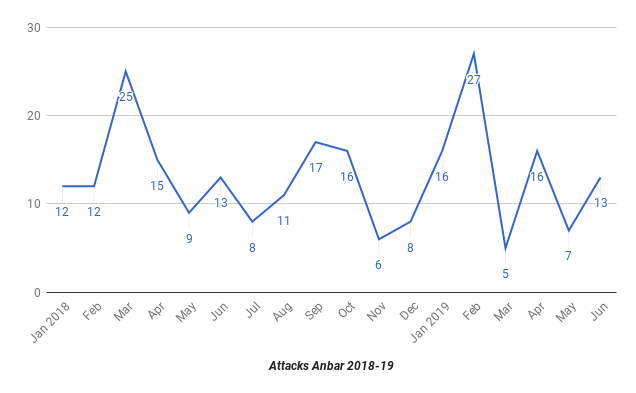 There were 13 incidents in Baghdad. That was the most since 14 in December 2018. IS operations in the capital province have completely fallen off since the winter of 2018. In September, during the last annual offensive there were 47 attacks in Baghdad. That went down to 30 in October, and then 13 in November and as low as 4 in March, before slightly crawling upwards to 10 in April and May each. The insurgents are obviously trying to return to the capital, but almost all the attacks are in the outer villages. Not only that but they are all small shootings and IEDs. There were two exceptions in June. First, IS set off an IED in Tarmiya in the outer north, and then when the ISF went to investigate they were ambushed leading to 6 ISF deaths and 15 wounded. Three days later they attacked a group of civilians in a town in that district leaving 2 dead and 4 wounded. If the organization wants to remain relevant, seriously threaten the government and earn a larger amount of money it has to make a comeback in Baghdad. So far it’s struggling to do that. 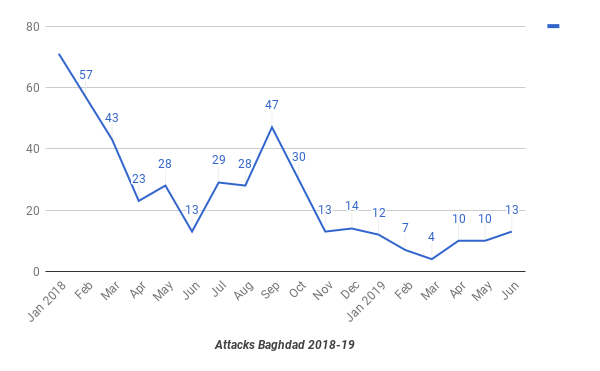 Nearly every area of Diyala was hit in June, but almost half the attacks, 12 total were in the Khanaqin-Jalawla districts in the northeast. In October 2017, the central government took over the area from the Kurds after their independence referendum. There are not enough security forces there, and those that are compete with each other. This is being exploited and hence the spate of attacks there in recent months. There was only one suicide bombing in the country during the month and that was in Khanaqin. The militants were never able to seize any territory in the province in 2014, so it was the first place it reverted back to an insurgency allowing it more time to re-organize, hence the high level of operations there. 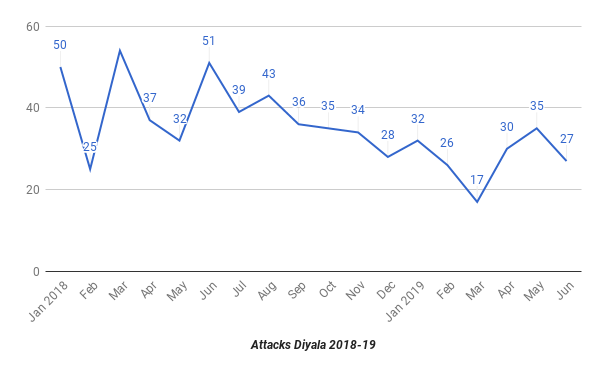 Violence in Kirkuk usually occurs in the south, but there were 8 attacks in Kirkuk City in June. That included a spate of IEDs and attacks upon a checkpoint and patrol at the end of the month. Kirkuk City is one of the few urban areas that IS still has access to. When the province was being liberated IS withdrew rather than fight. That allowed it to maintain many of its cadres there. They appear to be more involved in rebuilding than carrying out attacks however, as incidents have been very low since November 2018. 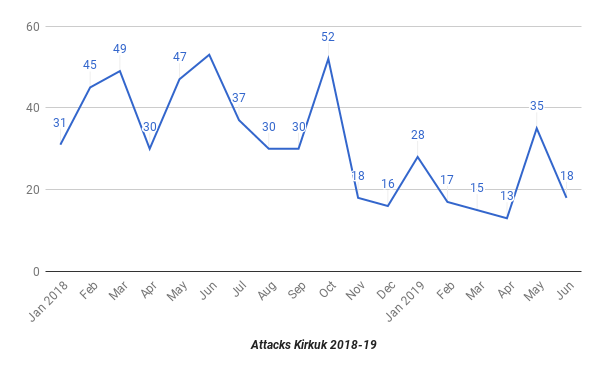 Incidents in Ninewa have gone through wide fluctuations. There were 9 attacks in January, up to 20 in February, down to 11 in March, and then 19 in April, 29 in May before 10 in June. That included four farms being burned. Two of the incidents were also old IEDs going off in Mosul, leftovers from the battle for the city. 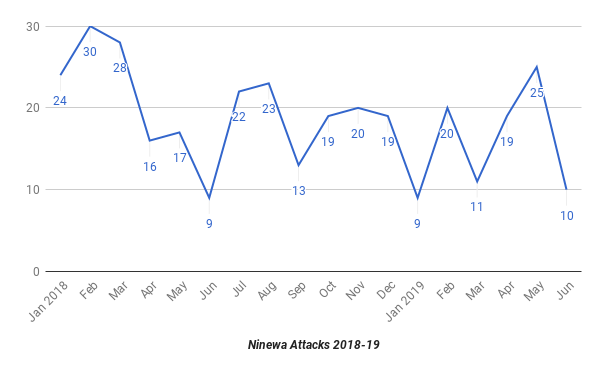 Salahaddin was relatively quiet as well. There was one IED ambush in response to another IED that hit a Mukhtar’s house and two gun battles, but otherwise there was only an average of one attack every three days. 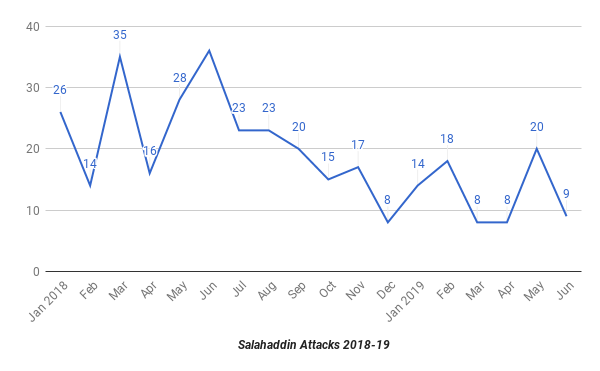