Review The Bush Administrations and Saddam Hussein, Deciding on Conflict 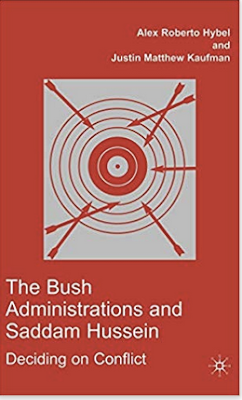 In The Bush Administrations and Saddam Hussein Alex Hybel and Justin Kaufman attempted to explain the decision making process behind the senior and junior Bush presidents when they dealt with Iraq in the Gulf War and 2003 Invasion and find an appropriate theory to help understand them. They found the two presidents were strikingly similar. The authors argued that both administrations reacted instinctively to Saddam, seeing the world in stark black and white terms. Instead of being rational actors they both fell victim to group think by refusing to consider alternatives after they quickly made decisions about what to do about Iraq.


The book does a good job describing how both Bush administrations immediately made decisions about Iraq without having any real discussions. The first Bush was trying to forge better relations with Iraq leading him to completely ignore warnings that Saddam was going to invade Kuwait. The president felt betrayed and the day after the invasion he and his National Security Adviser Brent Scowcroft decided that they would send troops to Saudi Arabia and use the threat of force without consulting with anyone else. This was presented as a fait accompli to the cabinet and would lead to the Gulf War. Additionally, Bush interpreted events using a historical analogy relevant to him: Adolf Hitler and appeasement in Munich in 1938 which led to the Second World War. Bush saw Saddam as Hitler and believed sanctions and containment would be just like appeasement and make the situation worse. Similarly, the second Bush was unprepared for 9/11 even though there were growing warnings that Al Qaeda was planning a spectacular attack upon the United States. The president immediately jumped on Iraq, and believed that Saddam was a deceitful and dangerous man that could not stand after the shock of the attacks on New York and Washington D.C. Again, he decided this upon his own, and was supported by many of his top cabinet members who also disliked Saddam. There was no real debate upon other options, and the White House constantly pushed how easy both the war and postwar situation would be because they were so sure of their actions. Both presidents had a stark vision of the world divided between good, the U.S., and evil, Iraq. They did not go through a cost benefit analysis of what to do about Saddam, but rather immediately decided to take military action. Hybel and Kaufman used noncompensatory decision making theory to describe this process where foreign policy makers don’t analyze their situations, but act instinctively, and then justify their choices and ignore the alternatives. The authors find both presidents very much alike in their approaches and decisions. They had the same type of black and white world views. Neither believed in real discussions when it came to Iraq. Both also claimed publicly that they did not want conflict when they immediately decided to use force.

The Bush Administrations and Saddam Hussein is a very short read but packs a lot. The authors make a good comparison of the two Bushes and the discussion of theory doesn’t go to deep as to lose the casual reader. Many people believe that leaders are rational actors and have advisers there to help them with decisions. That proved more an image than a reality when it came to the Gulf War and 2003 Invasion of Iraq. Both presidents made up their minds very quickly on their own without any real consultations and consideration of alternatives. The book tries to argue that this happens far more than one would think in foreign policy and therefore needs to be analyzed and theorized about to help understand the world.