Review the Iraqi Invasion of Kuwait, Religion, Identity and Otherness in the Analysis of War and Conflict

Hassan, Hamdi, the Iraqi Invasion of Kuwait, Religion, Identity and Otherness in the Analysis of War and Conflict, London, Sterling: Pluto Press, 1999 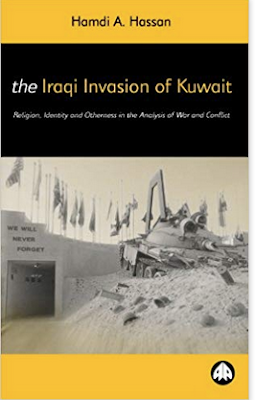 Hamdi Hassan wrote an interesting but ultimately inconsistent book in the Iraqi Invasion of Kuwait, Religion, Identity and Otherness in the Analysis of War and Conflict. He argues that realist theory the main system of analysis for international relations provides an incomplete explanation for why Saddam Hussein invaded Kuwait in 1990. Hassan argued that one most look at Arab culture, politics and discourse, what he labels Pan-Arabism to understand Iraq’s actions. He provides some original insights such as how Saddam was able to garner widespread support throughout the Middle East. His fault is that the book is based upon a thesis and he defines each major concept he brings up, and goes through the literature and theory around them. The book ends up getting lost in all these explanations as a result. In the end this leads to a wildly inconsistent read.


Hassan goes through three different perspectives to explain the Kuwait invasion. The first was realism, the traditional means the West used to understand Saddam’s actions. This theory believes that states are the main actors in international affairs, they seek power and to protect their national interests. Therefore Iraq acted to acquire Kuwait’s wealth to relieve its debt from the Iran-Iraq War, it laid claim to Kuwait’s territory, it wanted greater access to the Persian Gulf, the two were in an oil dispute over prices, and finally Saddam strived to become the new Arab leader. Hassan argues that realism doesn’t give a full understanding of the invasion because it is westerncentric. Pan-Arabism for example has a whole history, politics, and discourse that realism misses. His goal then is to provide an Arab viewpoint to the conflict.

The Institutional and Reflective Perspective chapters are aimed at delving into Pan-Arabism. For example, Hassan goes through the history of Iraq that had a difficult time developing a sense of identity and nationalism because of its diverse population. That led to a series of authoritarian governments and then the dictatorship of Saddam Hussein. The society also became militarized because of its difficulties in nation-building. Governments like Iraq tended to use foreign policy to gain standing and power because their domestic situations were so difficult. They were more prone to use force as well. Hassan’s best insight was how Saddam won over the Arab street by talking about standing up to the Zionist threat, western imperialism, and the selfish Gulf States personified by the Kuwait monarchy. There were demonstrations across the Middle East in support of Saddam as a result. A Jordanian jihadist even called for Saddam to become the caliph in a new caliphate. The problem with these sections was that Hassan had to go through each topic he brought up like nation building, deterrence, culture, Islam, etc. by reviewing the main theories around them and the major writers. The reader has to wade through all this over and over before the author gets to Iraq. Did one really need to explain Islam for example? Because this was an expanded thesis this was necessary for Hassan’s teachers. It was not needed in a book, and only weighed down the text.

The Iraqi Invasion of Kuwait had real potential that was not realized. Delving into the Arab perspective provided some interesting historical background to Iraq’s invasion, and explained Saddam’s speeches about saving the Arab nation from foreign threats. Added to realism, Hassan provided a more rounded view of the war. The problem was Hassan kept the format of his thesis with all the theory and literature review that was completely unnecessary in a book. That meant all his insights were buried in pages and pages of meaningless explanations.