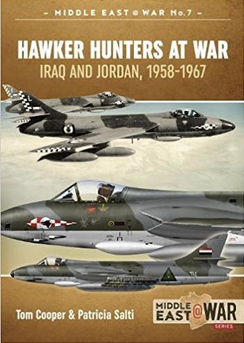 Hawker Hunters At War not only covers the British Hawker Hunter in Iraqi and Jordanian service, but the history of the two air forces, and their involvement in the 1967 Arab-Israeli War. Like others in Hellion’s Middle East at War series there are tons of pictures and first-hand accounts that bring the stories alive.


Cooper and Salti begin with the origins of the Iraqi and Jordanian air forces and their acquisition of the Hawker Hunter jets. Iraq was the first Arab air force created in 1931. The Jordanian force came about in the 1940s. Both countries were created by the British after World War I and London continued its influence upon both for decades afterward. All the uniforms, traditions, training, and most of their equipment came from England. As a result, in 1956 Baghdad asked the British about buying Hunter fighters. In 1958 Jordan did the same. Both sent their pilots to England for training and received British advisers at their air bases to help maintain the jets. Ties to London were so strong that Iraq turned down an offer for free planes from the United States in 1958. These relationships remained strong for decades. It wasn’t until the 1970s for instance, that Iraq began receiving large amounts of Soviet equipment that its pilots finally turned away from the UK’s influence, but even then there were generals that were steeped in this tradition. Jordan never broke from this history. This was one of the lasting legacies of British imperialism in the region. It was important that the authors included this history because it explains why the two countries invested so much into their Hawker Hunters.

Next, the book deals with the first deployments of the Hunters. For Iraq that was against the Kurds and then two coups, and for Jordan it was against an aggressive Israel. In 1961 Mulla Mustafa Barzani began has latest revolt against Baghdad, and the Hunters were deployed to beat his forces back. Two years later elements of the military and Hunter jets helped overthrow the government in a 1963 coup. Some of the air force officers then attempted to depose Colonel Arif’s regime in a failed plot in 1965. For Jordan’s Hunters Israel provided their first tests. In September 1964 Israeli planes began routinely flying into its air space. In December there was an air battle between the two sides involving Hunters. In 1966 Jordan was in secret peace talks with Israel when the latter invaded the West Bank and burned down two villages in what Amman believed was an attempt to provoke King Hussein and justify a seizure of that territory. Jordanian Hunters fought Israeli Mirages during that confrontation. This provided the air forces of both countries some limited combat experience that would prove important in 1967. The Jordanians had already faced off against Israel, while the Iraqis had high morale after several years of bombing the Kurds.

The 1967 Six-Day War takes up half of the book, and was a completely chaotic conflict for Iraq and Jordan. Egypt, Syria, Jordan and Iraq all agreed to a united command for the war, but that fell apart in the first hour of the war. An Egyptian general was the overall officer in charge, but he was airborne when the war began and couldn’t land because his destination was being bombed. That meant for hours there were no orders for what the Iraqis and Jordanians were supposed to do. Amman claimed it went into battle in the morning, but that was impossible because of the situation of the Egyptian commander. In fact, King Hussein and his general got into a big dispute over whether to attack Israel or just defend their own territory, which meant its air force did nothing until the afternoon. When the pilots were finally ordered into action none of their planes had been armed and the officer with the key to the supply dump had to be found. Jordan only flew two major air strikes into Israel before its two main air bases and most of its planes were destroyed by the Israelis forcing the pilots to relocate to Iraq. Baghdad was much more involved in the fight. Iraq flew several missions into Israel but its intelligence was so bad most of the time the planes got lost and bombed targets of opportunity. This was seen as such a threat however that Israel ordered three air strikes upon the H-3 air base in western Anbar. After the war Israel claimed it wiped out Baghdad’s air force in one raid, but that was an exaggeration shown by the fact that there were actually three bombing raids spread out over two days. These flights were intercepted by Iraqi and Jordanian pilots each time. In all of the air battles the Israelis, Jordanians and Iraqis claimed totally different numbers. Based upon extensive research and interviews with the pilots Cooper and Salti believe that the Iraqis finished with a 3 kill to 1 loss ratio, while the Jordanians had a 2 to 2 ratio during the war. What the authors also highlight is what a comedy of errors the entire conflict was. Neither the Jordanians or Iraqis were ever given clear orders about what to do and when they entered Israel they were basically flying blind because they were never even told where their targets were. Iraq for example were using pre-1948 maps. Both countries would also carry out air strikes, then fly back to their bases and wait a few hours for their planes to be rearmed and refueled with no urgency because they never expected the Israelis to counter attack which they did again and again. In the end, the two countries were involved in some very intense bombings and air battles. Even though the Israelis were far more organized they failed to take out the Iraqi air force, but were more successful against the Jordanians.

Cooper and Salti did a great job with their research. They were able to provide plenty of first hand accounts of the 1967 War, and the Iraqi and Jordanian air forces history before that. There are tons of pictures as well, including a series of Hawker wrecks that were at an Iraqi air base after the 2003 invasion. There are a series of color plates of specific Hawkers in the center as well. The book therefore provides a well-rounded account of the Hawker jets service with the two countries up to the 1960s.

No it's just on the Iraqi and Jordanian air forces