Islamic State’s Offensive Could Be Winding Down


The Islamic State’s latest offensive Revenge of the Levant appears to be coming to an end. It was announced in April and peaked in May. Since then the number of incidents has declined each month.


There were a total of 82 incidents in Iraq in July. This was the second month the number of attacks had gone down in the country. In April the Islamic State started its annual campaign. The month before there were just 59 incidents, the lowest monthly total since 2003. In April there was 97, then 135 in May, before going sliding down to 93 in June and then 82 in July. This was far below last year’s offensive when there was an average of 168 attacks per month. The government launched a two part major sweep through four provinces during the month which could have accounted for the low attack figures. Then again, incidents were down in governorates that were not included so something else was going on during the month. The United Nations reported that IS is increasing its attacks in Syria so it might be concentrating there more than in Iraq currently. 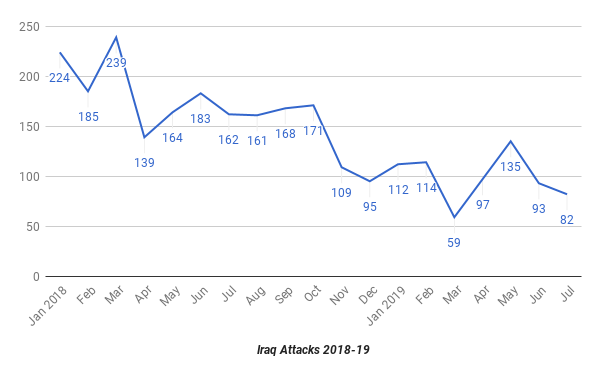 There were 202 casualties during the month. That included 1 Peshmerga, 4 Asayesh, 9 Iraqi Security Forces (ISF), 14 Hashd al-Shaabi, and 55 civilians that lost their lives for a total of 83 deaths. Another 4 Peshmerga, 7 Asayesh, 21 Hashd, 22 ISF, and 65 civilians were injured for a total of 119 that were wounded. 18 corpses were found in the Sinjar district, victims of IS, that left 65 violent deaths during the month. Surprisingly Baghdad had the most casualties with 42. Usually Diyala has the most attacks and the highest number of dead and wounded.

Violence has wildly fluctuated in Anbar, Kirkuk, Ninewa and Salahaddin.

Attacks have gone up and down nearly every month in Anbar. In March before Revenge of the Levant there were just 5 incidents. That went up to 16 in April, down to 7 in May, up to 13 in June, and then back down to 5 in July. It seems like the province is a secondary front today and mostly being used to move men and material back and forth from Syria. Anbar was also included in the government’s large security operation. 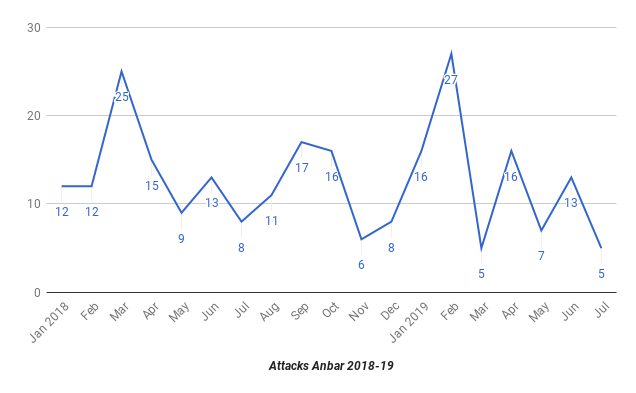 In Kirkuk the trend in attacks has mostly been downward with a few spikes. In January there were 28 attacks, but then 17 in February, 15 in March, and 13 in April before jumping to 35 in May when the IS offensive began. Afterward incidents went back down to 18 in June and 15 in July. There were a series of rocket and mortar attacks upon towns and security forces during the month, but otherwise most of the incidents were low level shootings and IEDs. 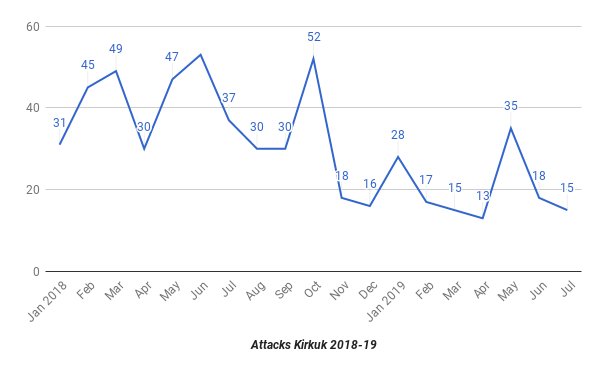 IS activities in Ninewa followed the same pattern as the rest of the country. There were 11 incidents in March, then the annual offensive began and attacks went to 19 in April, peaking at 25 in May then 10 in June and just 6 in July. 2 towns were attacked during the month, but the rest of the incidents were unnoteworthy. 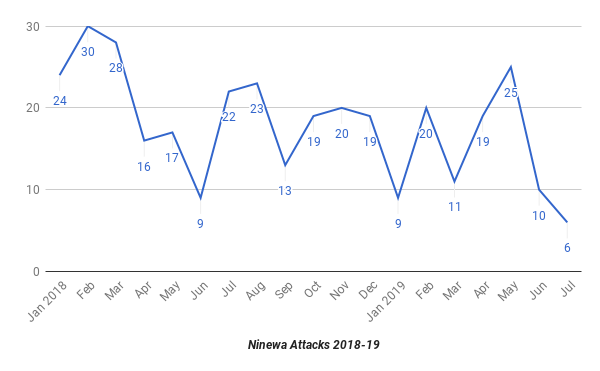 Salahaddin followed a similar pattern. There were 8 attacks in April, then 20 in May, then 9 in June and 8 in July. There were two gun battles and an attack upon a checkpoint during the month, but overall things were back to before the summer offensive. 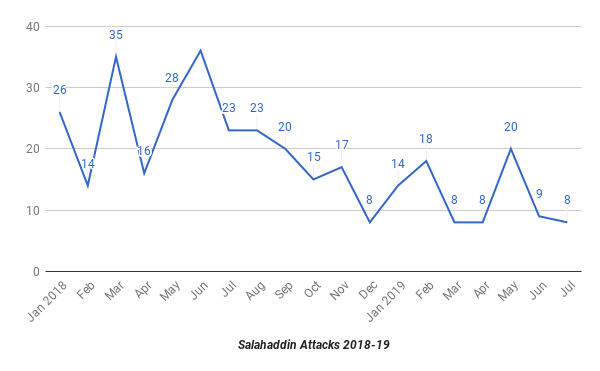 IS is slowly trying to pick up its operations in Baghdad. There were 4 incidents in March, 10 in April and May each, 13 in June and 15 in July. More importantly the insurgents were able to pull off 2 suicide bombings, while a third was arrested and a car bomb was dismantled. The suicide bombers were the reason why the governorate led the country in casualties during the month. That was the first mass casualty bombing in the capital since May, but before that the last major bombing was in May 2018. The car bomb was also found in the east, which hasn’t happened in months either. Almost all of the militants’ activities occur in the outer north, south and west. 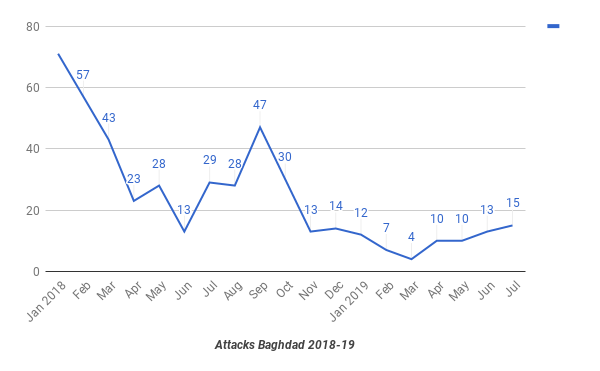 Diyala is the only area where IS has been able to sustain itself. There were 28 incidents in July. Before that there were 27 in June, 35 in May, 30 in April and only 17 in March. The governorate is regularly the most violent place in the country. Confrontations with the security forces and attacks upon towns are common occurrences. IS never seized any territory there so it was the first place the group reverted back to an insurgency. That has given it the time to rebuild its cadres which today are active in every single rural area. It’s favorite target is the Khanaqin-Jalawla districts in the northeast, which the central government took over from the Kurds after their independence referendum. There are not enough security forces there and IS is taking full advantage of that. 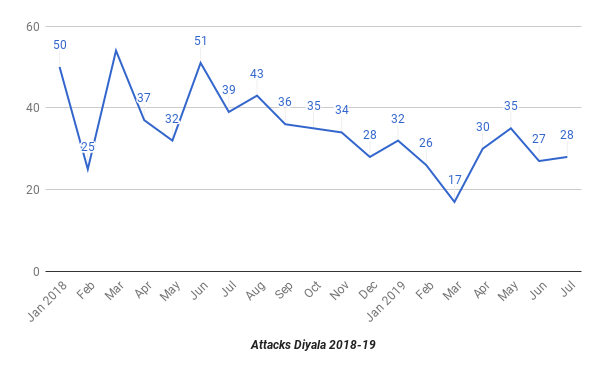 Finally, there were two attacks that showed IS was getting adventurous. One was a sticky bomb on a vehicle in Karbala near Anbar province. There have been no IS attacks in the south since 2017. At the end of the month the insurgents also attacked a Kurdish checkpoint in southern Sulaymaniya by Diyala. It appears that this was pre-planned as IS started with gunfire on the Asayesh manning the post. Then when the Peshmerga arrived as reinforcements they were hit by an IED. IS then opened up with mortars as well. IS hasn’t attacked Kurdistan for years either. Both of these were outside the group’s usual areas of operation. These might be test cases to find vulnerabilities in the country’s defenses.