Review Hubris, The Inside Story of Spin, Scandal, And The Selling Of The Iraq War

Isikoff Michael and Corn, David, Hubris, The Inside Story of Spin, Scandal, And The Selling Of The Iraq War, New York: Crown Publishers, 2006 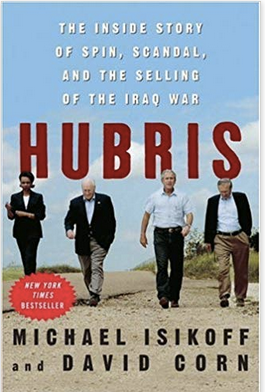 Hubris focused upon the Bush administration’s argument for the 2003 invasion of Iraq and its aftermath in the United States. It’s an apt title because the White House argued that it was positive that Saddam Hussein was a threat to America, that the war would be easy, and the post-war situation easier. Not only that but the day the invasion ended, things began going wrong. The administration’s response was to ignore the bad news for years. Authors Michael Isikoff and David Corn focused upon the weapons of mass destruction and Iraq-Al Qaeda claims made by the U.S. and how they came apart. The second half of the book gets lost in the story of Joseph Wilson and his wife Valerie Plame that were targeted by the White House for Wilson’s criticism of a story that Iraq tried to buy uranium from Niger. Hubris turned from what administration officials said about Iraq and how they were wrong to what administration officials and reporters said about Wilson and Plame. The latter is far less interesting than the former.


Isikoff and Corn argued that President Bush was intent upon invading Iraq from the start. The discussions within the White House were not over whether to invade or not, but when. The government presented an argument about Iraq’s possession of WMD and ties to Al Qaeda, but intelligence on those matters didn’t shape the decision to invade. Rather they were used to create a case to get the public behind the overthrow of Saddam. The authors point out that discussions over whether the intelligence on Iraq was accurate or not missed the point. The intelligence was not a major part of the decision for war, because that had already been made. Despite that the book goes through each one of the claims against Iraq from the aluminum tubes that were supposed to be centrifuges for Iraq to build a nuclear bomb to 9/11 hijacker Mohammed Atta allegedly meeting with an Iraqi intelligence officer in Prague. Each one of these stories was contested from the start, but the administration presented them as facts. Only some of these disputes ever reached the White House, and none appeared to have ever gone to the president’s desk. Again, the details didn’t matter as much as the public case that could be made against Iraq. It was the certainty of the administration that marked its first act of hubris. The problem with this half of the book was that it never went over the motivations of the main players in the administration. Bush, Cheney, Rumsfeld, and their aides all wanted war from the start, but why? That’s never explained which leaves a gaping hole in the story that Isikoff and Corn were trying to tell.

The second part of Hubris focused upon the Joseph Wilson-Valerie Plame-Niger affair, which the authors believed highlighted how wrong the administration was about Iraq, and yet only cared about its critics instead of its own glaring mistakes. The Niger story originated with a shady intelligence broker from Italy that forged documents claiming that Iraq tried to buy yellow cake uranium from the west African country. The Niger claim was never a major part of the U.S. argument against Iraq, and the CIA was never sure about it to begin with, but became famous when Bush included it in his 2003 State of the Union address. Wilson was a former ambassador who was sent by the Agency to Niger, a country he once served in, to investigate the claim. He said there was nothing to it, but then completely exaggerated and overestimated his role. He found that an Iraqi diplomat made a visit to Niger for instance, and asked about trade. Niger thought that could be about uranium, which gave the yellow cake story some legs rather than dismissing it. Not only that, but Wilson initially went to the media claiming he saw the fake documents that led to the story, when he never did. He also said that his trip disproved the story when it didn’t, and that the Vice President was informed of his findings, when that didn’t happen either. He later stated that the White House lied about the case for war, when ironically he’d lied about what he’d known, and greatly embellished his impact. Cheney was furious at his appearances in the media and told his aide Scooter Libby to discredit him by leaking the fact that his wife worked for the CIA and simply sent him to Niger on an exotic trip. Libby would later by convicted of perjury for his role in this matter. Isikoff and Corn used this as an example of how the administration was more concerned with its opponents than how completely off base it was about Iraq. No one was ever held accountable for the entire case against Iraq. This happened while that country was quickly descending into chaos with looting, an insurgency, and eventually a civil war. The White House argued that Iraq was only getting better, while the vice president’s office launched a campaign against Wilson. The problem was that this devolved into a who said what at what time narrative. There was simply too much unnecessary detail especially when it went into the case of the special prosecutor who was appointed to look into the matter. That loses the authors’ point about how the administration dealt with its failed case against Iraq.

Another major fault with Hubris was that it fell victim to some of its sources. Immediately after the 2003 invasion the White House and CIA began accusing each other for why no WMD was found in Iraq. Isikoff and Corn used many Agency sources, and this skewed some of the writing. For one, they claimed that while the administration didn’t tell CIA analysts to change their reports about Iraq it created an environment where everyone knew what the president wanted to hear. Second, it used CIA officers that said they rejected stories and defectors provided by the Iraqi National Congress. Third, it highlighted when the CIA disputed WMD and Iraq-Al Qaeda stories. The problem was that if the Agency was under so much pressure from the White House why did it consistently say there was no Iraq-Al Qaeda cooperation? Did that mean the administration was only good at pressuring the CIA’s weapons division and not its terrorism one? The CIA also accepted almost all of the INC’s stories initially. Finally, the book said that CIA Director George Tenet and his deputy John McLaughlin completely believed the WMD stories. That meant while some analysts might have been arguing about specific points on Iraq, the top leadership at the Agency were in complete agreement with the administration that Iraq had active chemical, biological and nuclear programs. The authors therefore got caught in the middle of a turf war and provided a contradictory impression of the differences within Washington.

Hubris turns out to be an uneven book in the end. The first half provided a good breakdown of the public campaign President Bush launched to justify the war. The second part gets lost in the Niger story. The penchant for details can be good when going through the WMD and Al Qaeda claims, but then there’s no larger analysis or explanation for why the president and his top officials wanted to get rid of Saddam to begin with. Finally, the sourcing was an issue. Overall, that meant the book can provide some good background to the case for invasion, but it won’t give you a real reasoning for why it occurred.